The first day of work at a new job can be a nervous experience for anyone from any walk of life. Take a moment to think of Warren, travelling to his first day of work with the CREO mega-corporation, a company that is promising to save the world and provide a better life for those willing to help them by joining their workforce. The Surge follows Warren as he begins his new job, but this is by no means a job simulator. From Deck 13, the developers of Lords of the Fallen, comes the next game to take inspiration from the Dark Souls genre, and for me as someone who is not a fan of Dark Souls but found recent release Nioh to be more inviting, I was very eager to see how a sci-fi twist would do with the game style. Happily I can say that I really enjoyed it.

The opening hour to The Surge is rather impactful. From the introduction cinematic that shows Warren riding a train on the way to his first day at CREO, listening to the CEO talking about what this mega-corporation is trying to do to make the world a better place before discovering the reality of Warren’s situation. That he is in a wheelchair, and that whilst CREO is trying to save the world, Warren is simply taking a job there because of what it will mean for him, a chance to walk again. The job that Warren takes will see him fitted with a CREO Rig, an exoframe designed to help in doing the job selected. For Warren this is everything he wants, to walk again and to do his part, but a happy day at the office seldom makes an exciting video game, and sadly for Warren, it is all about to go all ‘Pete Tong’!

The choice between the two jobs offered to Warren, determines the combat style going forward in the game as each will provide the player with a different Rig system. The Lynx rig will provide Warren with a more agile and quick attack style or the Rhyno rig, big and powerful and able to take a hit. Once the choice has been made, the happy joy joy message of CREO sharply comes to an end with a cutscene that was far more brutal that I had expected as Warren is fitted with his rig but in a violent way as the machines violently fit the rig to Warren. This is the first sign that all is not well and it is only going to be the start of Warren’s bad day. 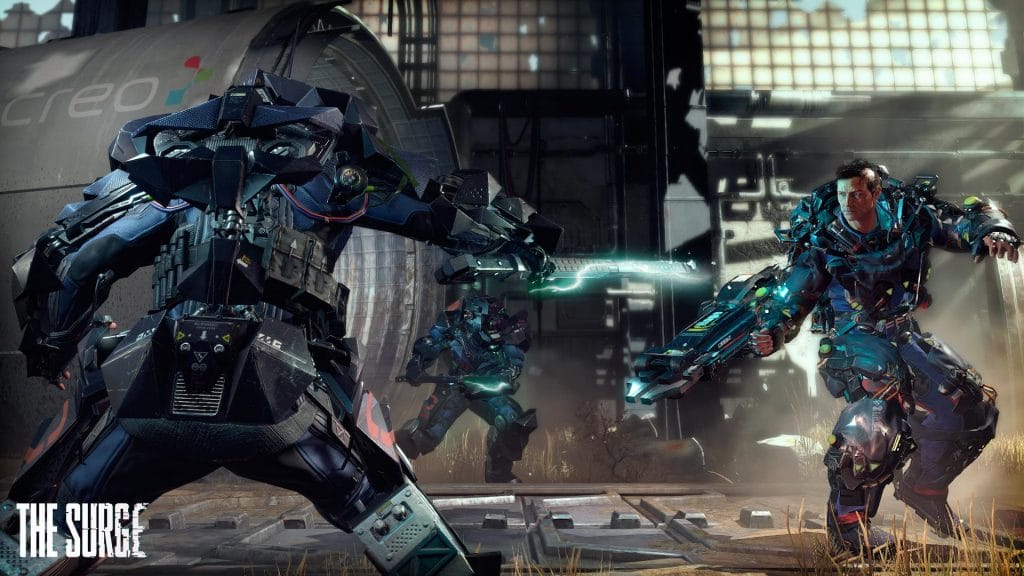 The Surge does a great job of introducing the player to the world, giving them a chance to get used to the combat and threats this new world will have for Warren. I enjoyed and was thankful for the manner in which the game fluidly gave tips on how combat works with hints dotted around the area, placed exactly at points the player will naturally progress through as you take your first steps in the game. This tutorial section of sorts, teaches the player about dodging, blocking, attacking and how the stamina system plays a part. Whilst it can feel a little hand holding to begin with, if like me, the frustrating style of Dark Souls to simply throw you into the action with a pat on the head and a whisper of “good luck, you will need it” to send you on your way, annoyed you then having this gentle introduction is most welcome.

But the hand holding does not last for long, oh no, once the game believes it has done enough to give you the basic foundation at least, it does simply let you get on with it. Soon you will meet basic enemies, seemingly dead bodies whose rig exo frames are operating on their own, each of whom are capable of providing a rather painful death. It becomes obvious that you will need to upgrade you rig and thankfully basic combat allows this to happen. Each part of the rig requires components in order to complete and then continue to upgrade them. Combat allows you to target specific limbs; head, body, arms and legs in order to both do maximum damage but also to collect components to upgrade. Need to complete your rig arm set well just spend some time farming enemies by targeting their limbs to get the components you need and then return to the medbay, which serves as the “bonfire”, to upgrade your rig. Now depending on which rig you chose at the start of either the Lynx or the Rhyno, will determine how fast you get upgraded as you encounter enemies in Lynx rigs before you do for the Rhyno. Having played the game with both, the Lynx was far quicker to upgrade in the opening area than the Rhyno.

The rig itself can also be fitted with implants, which can boost attributes or give new features such as a reduction in stamina use or regenerative healing. This requires increasing the power output of the rig, which will need ‘Tech Scraps’ collected from defeated enemies to level up the rig. The more power it can output will mean more implants can be used. It can also be used to open up new paths in an area by using the rig to overcharge door systems, so it is important to not only work to upgrade rig pieces but also in levelling the rig itself up. One nice feature to the gameplay is that should you be killed, the game will give you a limited time in order to return to the spot where you died and collect any lost tech scrap. The game will even give you an indicator of how far away you are from it and how long you have to get back there to pick it up. It is a neat and tidy way of removing the whole “you screwed up and lost it all” aspect to this genre. 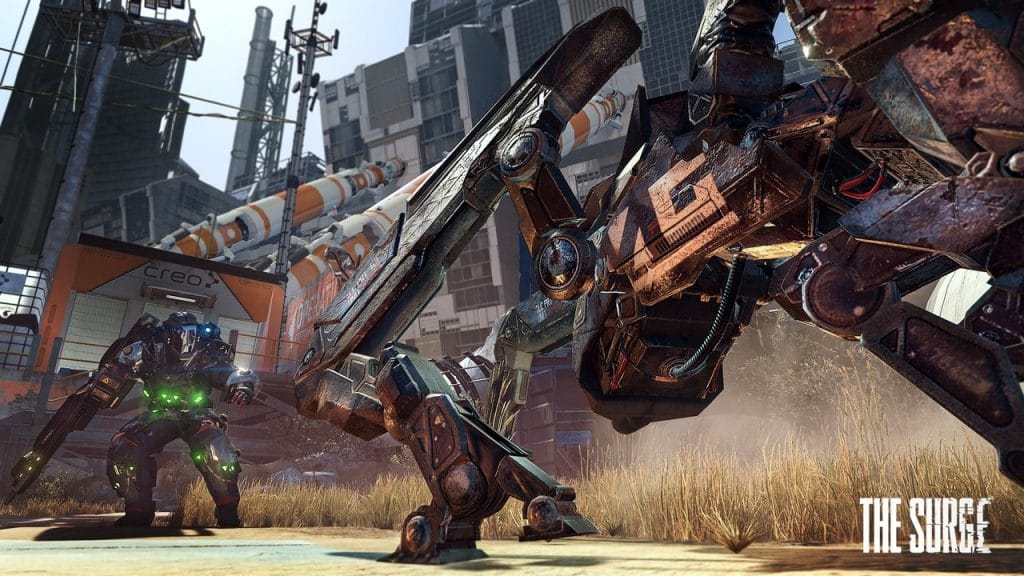 Visually this game looks great; the different areas are well designed to give enough for the player to explore but also in how shortcuts can be opened up giving a route from the medbay hub, to later regions of the level area. Creating shortcuts becomes a natural process as you move through the level and discover doors to open which provide that route to the medbay removing the grind of having to backtracking the same paths especially once you have done enough farming to get your rig upgraded enough for that area. It has that great sci-fi look of being in the future but not too far from the modern day. The combat has a nice flow to it with impressive execution animations once enough damage has been done to an enemy, a chance to execute them in a style that depends on which limb was targeted at the time so if you hit execution whilst targeting the head, then the animation will play showing the brutal removal of the head which is more satisfying than it should be really.

The combat is also fun with different weapons that change your combat style accordingly. From dual wielded weapons which are perfect for the Lynx rig to the heavy hitting hammers and blades that best suit the Rhyno rig. There is a weapon for each play style and with an easy mix of light and heavy attacks, some impressive looking combinations can be used in the fighting, meaning that even if you are new to this genre and style of play, it does not take long to find a way in for players of different experience levels. But in true Dark Souls style, The Surge can up the challenge without warning, especially when it can come to an area boss fight. Going to a new area will mean a sharp increase in difficulty, spiking a little too harshly perhaps until you get your rig upgraded enough to deal with the new level of challenge. Boss fights will require learning how to deal with that boss’ attack pattern and style such as the first area boss; an ED-209 clone machine which likes to go all rockets blazing so keeping underneath it and attacking whilst avoiding its stomping will take it down. But before I learned that method this thing kicked my butt for over an hour, trying different weapons out only for it to blast me into the grave before noticing I could attack it from underneath it and avoiding its attacks made the final blow in defeating it as sweet as honey. 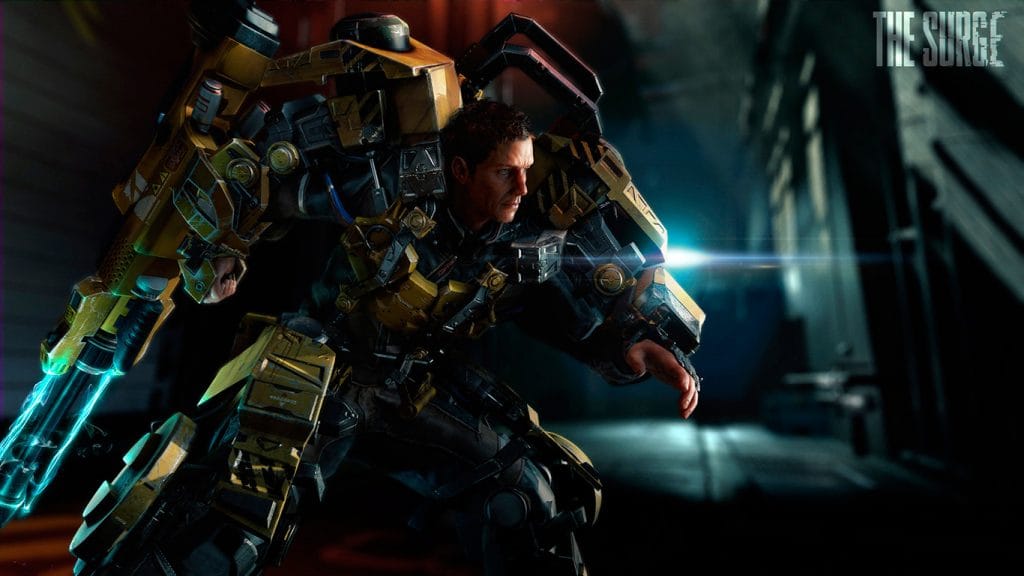 I was pleasantly surprised by how much I did enjoy The Surge considering I was not a big fan of Lords of the Fallen, but it is clear that Deck 13 took all the feedback on board and came at this game in a refreshing way. I love the story and sci-fi setting which is kind of Dark Souls meets Elysium, and much like Nioh, it gave me a way into the gameplay which allowed me the chance to tackle it without feeling too overwhelmed from the start. The combat is satisfying and varied enough to make me want to experiment with different options. The grinding of enemies to level and upgrade my rig did become repetitive as was revisiting the same areas of a level multiple times whilst exploring and trying to find shortcuts.

The Surge feels different enough from Dark Souls to stand out on its own and offers enough to sink your teeth into with a challenge level that will keep you coming back for more even when the game takes delight in kicking your behind.

Sean McCarthy
Freelance writer but also a Gamer, Gooner, Jedi, Whovian, Spartan, Son of Batman, Assassin and Legend. Can be found playing on PS4 and Xbox One Twitter @CockneyCharmer
Previous articleWin The Great Wall on DVD
Next articleReview: This is the Police