Did you read about how the latest Fire Emblem title is a remake of a title that had only been previously released in Japan called Fire Emblem Gaiden? Nintendo certainly tried to make this fact known as if it was finally going to give the rest of the world the chance to experience a masterpiece. But was it worth revisiting the past to breath new life into this relic from days gone by with Fire Emblem Echoes: Shadows of Valentia?

As one of Nintendo’s oldest franchises, Fire Emblem, has changed mostly on a cosmetic level with basic gameplay elements more or less remaining unchanged for years. It’s not surprising given the consistent track record Nintendo has when it comes to providing high quality entries in the Fire Emblem franchise. Strip even the modern iterations of their fancy visuals and other features and the combat itself is still enough to warrant playing any of them. Each entry prides itself on offering high quality strategic turn based battles, where characters can move a limited amount of times per turn, and this one isn’t any different.

Shadows of Valentia does contain some very interesting features to make it more light-hearted, but it’s fighting battles that will make for the most memorable moments. One of the key features of a Fire Emblem title is the fact that any characters that are defeated in battle die and never come back. This makes for some harrowing choices on the battlefield when faced with the crushing realisation that not everyone might make it to fight another battle. It’s also the sort of feature that may have resulted in giving the franchise a reputation for being too harsh on players. Fortunately modern Fire Emblem titles like Shadows of Valentia are Nintendo’s way of appealing to a wider audience without sacrificing what made earlier titles so popular with seasoned players. 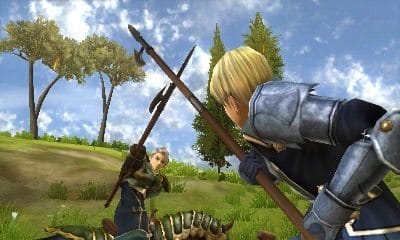 The title not only accommodates for players of all skill levels with different difficulty settings, but also provides the option of characters not dying when being defeated in a battle and simply returning once the battle has been completed. Arguably it is a bit of cop out to play such a strategic title as this with gentler rules, but it does make it less daunting for anyone who doesn’t have the patience of a saint when it comes to meticulously planning every battle move. Not that it matters that much given the fact that even on easy the title still provides a satisfying learning curve that eventually turns into challenging battles late into the story that players can feel confident enough to take on.

Of course that Shadows of Valentia isn’t satisfied with just providing players with an impressive amount of battles that offer different challenges depending on the map layout and the surprisingly varied set of enemy characters used. One of the most prominent new features is the inclusion of actual dungeon exploring. Albeit most dungeons are small and fights still take place in turn based top down maps, it’s a welcome addition that could even prevent fights from being less repetitive for some players. Most of these dungeons are also optional and they do offer a better insight into Fire Emblem locations. More so given that characters can interact with other characters in certain sections of some locations such as dungeons and even find new items.

The towns and other locations such as the aforementioned dungeons are also worth checking for side-quests and different characters to chat to. It helps that the dialogue has been improved when compared to the previous Nintendo 3DS Fire Emblem title. In that it feels a lot more grounded and not so much like it’s typical anime drama. Pretty much every line of dialogue has been gifted with voice acting support, which is impressive for a title such as this that is usually more focused on its functional features. Despite the complete overhaul the title has been given with this fancy remake, it’s still possible to see tributes to the original with the likes of remixed music tracks.

Getting to recruit new allies as the story progresses is a nice touch and strengthening bonds between characters, by letting them engage in conversations at random times in battle, are both trademark Fire Emblem features that work exceedingly well in a title such as this. As superficial as it might be, it’s these interactions that make it easy to care for their well being. More so when getting some input on the outcome of side stories by reuniting these recruited characters with their family members and such. 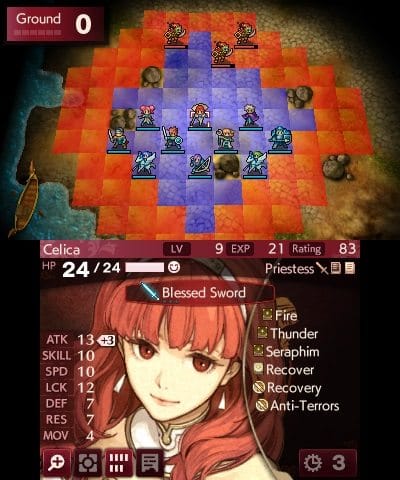 As the story progresses players get to control two main characters (Alm and Celica) and their ever growing army of allies. At one point both parts of the story come together briefly before the player is trusted with progressing them at the same time. Whilst it’s possible to focus on one part of the story at a time, it is still necessary to go back to continue the other part of the story to complete the title. One part of the story might feel more compelling than the other depending on the player’s interest. The quest to find out why the goddess Mila has turned her back on her people might be more interesting to those who are keen on the supernatural aspect of Fire Emblem. Still, it’s interesting to note that despite their different goals, both characters still need to engage in countless battles to achieve what they set out to do.

All of this is connected by an overworld map that works like a treat. It’s much more engaging to be able to get a peek of what comes next. The only downside to this idea is the inclusion of enemies that randomly appear on the map, as characters move between locations, since it means having to constantly clear previously cleared locations. It also has the unfortunate side effect of making the repeated use of maps in different locations more apparent.

Characters grow stronger and level up as they successfully defeat enemies and deal damage. At certain levels they can change classes and these come with new benefits and abilities that enhance their current class traits. Albeit to do so, it’s necessary to visit certain locations where characters pray to the goddess Mila. It’s a somewhat cumbersome process and one of a couple of features that can only be specifically accessed from certain places. Then again the title also lacks an option to load a save file whilst playing it and so it’s necessary to go back to the Nintendo 3DS home menu, quit the title and start it again to load a save file.

As usual, some character classes are more effective with dealing with certain enemies and the same applies to paying attention to which enemies can hurt them more. At the end of each battle smiley icons are displayed next to characters representing their stamina when fighting battles in dungeons. As a modern Nintendo title, Shadows of Valentia also makes it possible to use amiibo toys to unlock certain abilities such as being able to summon “illusory” characters to help out in a battle. But what is most fascinating is the use of magic in this title, in that it usually requires the character abdicating of some life points to perform any magic. This further emphasises the need to sensibly plan ahead before making any rash decisions that will result in the loss of a character – even if only temporarily since healers are vital in most battles and the use of items to heal is not the most ideal of solutions. 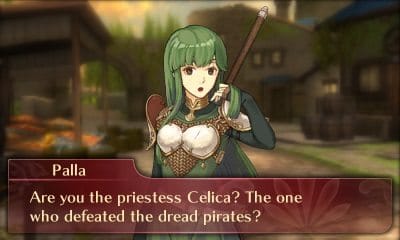 The title continues its streak of welcoming players of all skill levels with the introduction of a turn wheel to go back a limited amount of turns in a battle. It’s an interesting idea and handy for anyone not certain of what to do next in a battle and to undo any turns where characters have been defeated. Collecting more cogs found in different locations will result in being given more moves to rewind turns.

A string of enjoyable battles and clear structure helps to make this one of the more accessible Fire Emblem titles to date. As ever, the stakes can be as high as the players wants them to be. At its harshest defeated characters never come back and enemies will use every opportunity to screw over the player in battle. Easier settings gloss over these harsh Fire Emblem traits, but it does make for an accessible adventure that more players can enjoy. It’s incredible to see Nintendo still releasing such a treat as this many years after the Nintendo 3DS has been out and one that is a remake of a title released more than two decades ago. If anything, Fire Emblem Echoes: Shadows of Valentia’s eagerness to overlook its tough origins, the very bread and butter of Nintendo’s premium strategy franchise, makes for a more captivating journey that still requires strategic thinking to endure the many challenges ahead.

Yesterday it was confirmed that Wasteland 3...
Read more
Gaming

Minecraft Dungeons Delayed Until May 26th 2020

What was originally slated as an April...
Read more