From the moment that the E3 trailer revealed Horizon Zero Dawn, it grabbed my attention. It showed a world overrun with robot machines, a lead female character and of course, a bow. It looked amazing and I followed it from that day till its release and every developer diary vidoc just continued to build my expectations for what was promising to be one of the highlights of PlayStation 4 in 2017. Happily I can say that Horizon Zero Dawn more than met my expectations, it blew my mind completely!

The player is first eased into the world of Horizon Zero Dawn by watching a teaser animation that plays on your first time firing the game up and before you even see any menu options. A baby is handed to a hunter who is charged with the baby’s protection and to raise her to have all the skills of a hunter, almost reluctantly taking the child. We next see the child as a young girl, Aloy is being trained in how to hunt and use a bow against the robot machine beasts that exist in the wild and learn that she is being raised in order to take part in the Nora tribe’s Proving ritual, because she and her guardian Rost are considered outcasts by the Nora, and the only way for Aloy to be accepted is by winning the ritual.

One of the first things that grabbed me about this game instantly was the quality of the writing, not just in the dialogue between the characters in the early exchanges of the game but the almost ease at which it sets up this strange world that Aloy lives in. The player gets to control Aloy as a young child as she discovers ancient ruins, an underground facility that Aloy thinks belonged to the ancient ones. In the twenty minutes or so of exploring this area, the mystery of this world is crafter so sublimely as Aloy discovers her first Focus, a device placed on the temple that allows Aloy to interact with various recordings and text files that put her on the path to discovering what happened to the ancient ones. The writing is so carefully detailed that even this early in the game, the player immediately begins to get a feel for this new world and the secrets it holds.

That strength in the writing continues throughout the game as Aloy, now an adult, has learned to use the focus to help her hunt and explore. The focus can be used to track people and animals by highlighting movement trails, it can scan the machine beasts to identify them and highlight weakspots to exploit. The mystery of the technology that Aloy is able to use is in stark contrast to the world around her which consists of a primitive tribal culture, but the power of the writing helps create the two sides of this world, that of the ancient ones and the current world, weaving both together with a narrative that unveils the truth about each one with a flowing and natural pace that never leaves the player in a position of not understanding what is happening to Aloy and as Aloy learns and understands more about the world, so does the player. 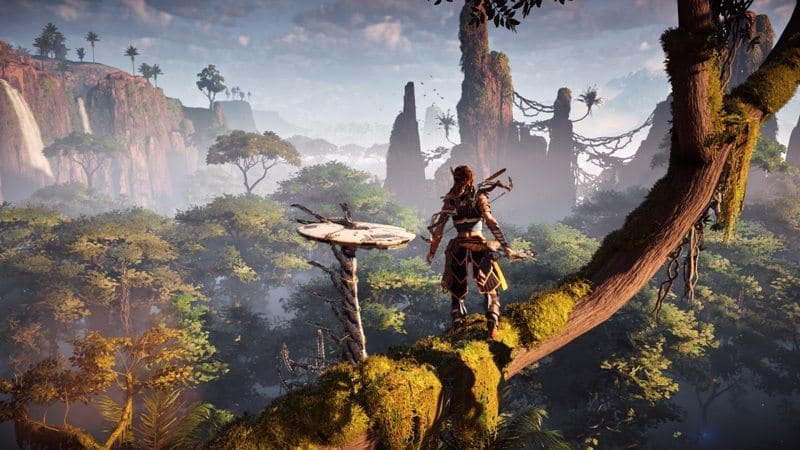 The power of the writing is complimented so brilliantly by the visuals and I am more than prepared to step out and say that Horizon Zero Dawn is the best looking game on consoles right now. From how details the player models are to the visual splendour of the different environments and structures that make up this world and the remarkable and stunning machines that roam in it, everything is just so wonderfully drawn and created that the temptation to trigger the built in photo mode every few minutes is quite overwhelming. If Sony needed a game to help push the PS4 Pro and its 4K visuals than Horizon Zero Dawn is both the poster game and the benchmark for what is now possible. But even on my standard PS4, Horizon Zero Dawn is just beautiful across the board, and it is a real joy just to be in this world. Whether it is just travelling from quest to quest or just hunting for materials in order to craft and upgrade outfits and weapons, exploring the wondrous environments are joyous and between doing the many types of quests you can just enjoy travelling. Exploring is rewarding as you unveil more areas and discover even more things to do in the world.

That brings me to just how much gameplay Horizon Zero Dawn has as an action adventure game, and it has an abundance of things for the player to do. This game has one of the most concise quest tracking systems in this genre to date. There are different types of quest for Aloy to complete from the main story and side quests to running errands for the various people you meet along the way. There are hunting grounds which will test the player’s skill in combat and use of weapons. Accessing the hub via the controller’s touch pad allows quick access to inventory, outfit, weapons, map and active quests. Each quest will tell you the distance Aloy has to travel to reach its starting point as well as showing you the quests already completed. It makes it so easy to stay on top of what Aloy has to do in terms of the main story and gives you access to quests to do if you just want to travel about. The pacing of these quests means none of them really feel too tedious to complete and you will never be overwhelmed that you lose track of the main story either. 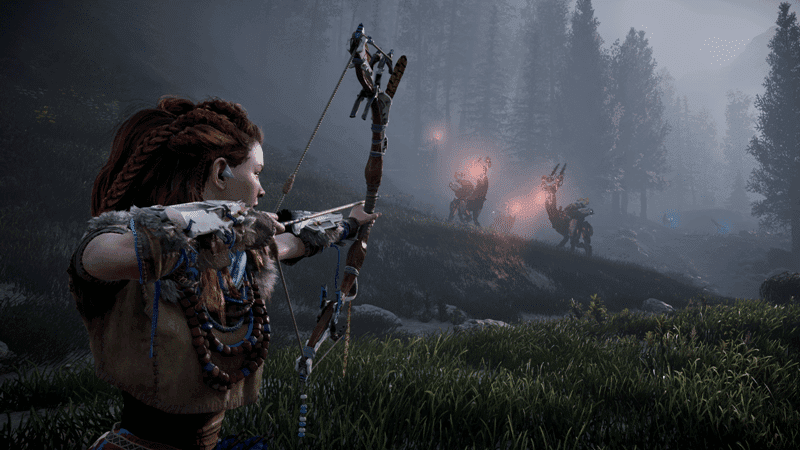 The combat for me is just another example of how Horizon Zero Dawn excels in this genre. Taking on the majestic machines takes this game to a whole new level with a combat system that is challenging at first but as you progress and collect new weapons, Aloy gains the ability to tackle the machines with new tactics. This is a vital part of the combat as Aloy will soon begin to encounter stronger and deadlier machine beasts. The Focus as above can be used to scan the machines to identify weakspots but it can also be used to tag them and to highlight their path. The range and variety of the machine beasts is staggering and truly display the animal traits and behavior of their source creature. The Machines range the basic Watcher machines that are actively scanning and looking for Aloy, to Ravages and Sawtooths that act like tigers and big cats. Soon Aloy will come up real beast machines in the Behemoth and Snapjaws and against real monster machines such as the Stormbird and Thunderjaw beasts.

The beauty of the combat is that the player is given every opportunity to build up their weapons and outfits with modifications to help increase their strength and damage to tackle the machines gradually so by the time the more dangerous machines are introduced to Aloy, you have a fighting chance as long as you take your time and study how to tackle each one. The machines will be covered in armor and weapons, all of which can be shot off using enough arrows, and weapons can also be picked up and used against them thanks to the Focus. There is a real satisfaction in tackling one of the large monsters such as the Stormbird or the Thunderjaw and taking out their armour in order to be able to do increased damage on them.  The combat infuses all the hunting skills that Aloy has learned and the player can make use of elemental trip wires and traps to aid her, and once you develop your own strategy for tackling the machines, especially those who travel in packs and can attack in groups, the combat in Horizon Zero Dawn is one of the truly satisfying in this genre. 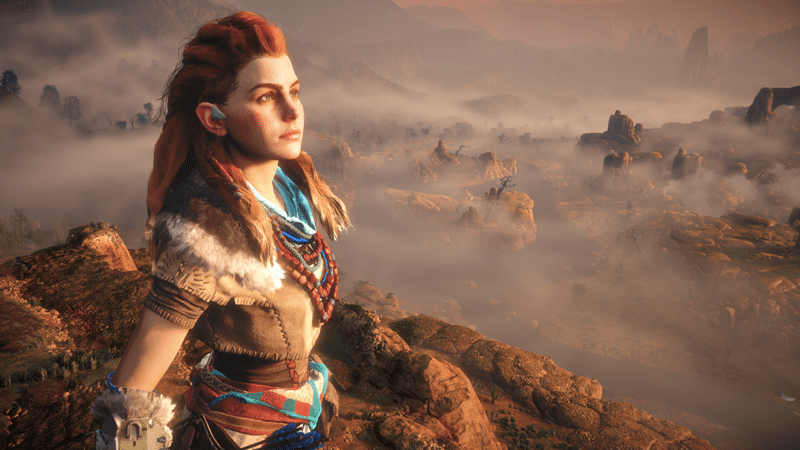 Horizon Zero Dawn put simply is the best game I have played on PlayStation 4 in a long time. The visuals and musical score are simply breathtaking, the writing for the story and character interactions is a new benchmark for this genre and the combat is as rewarding to master as I found the combat in the Arkham series to be. The world is vibrant with so much for the player to do with quests, exploration and collectibles that even with 40 hours in the game so far, I still have an abundance of things still to do and excited to do so. The story is written with such precise detail that uncovering all the secrets pushes the narrative to levels not really seen outside of a massive JRPG title such as Final Fantasy. This is simply a must have in your PlayStation collection and definitely if you have a PS4 Pro.

This is an instant classic PS4 title and it will really take something special to beat this to GOTY 2017. It again shows that Sony are right on the money when it comes to PS4 exclusives, Guerrilla Games have achieved something magical with Horizon Zero Dawn that has set the bar for what games can and should be delivering in 2017.