Once in a blue moon a title comes along that manages to defy the expectations that are connected to a particular genre. Torment: Tides of Numenera seems to be attempting to do just that with its rather unique take on the role-playing genre.

Torment: Tides of Numenera tells the tale of a land ravaged by the many civilizations that have left their mark over thousands of years. Each one referred to as a new world, with the current iteration where the story takes part, being referred to as the ninth world.

Representing the emotions of every individual are tides and one individual called the Changing God attempting to manipulate them is what starts off catastrophic events leading up to the start of the story. The Changing God in pursuit of eternal life has been using disposable bodies to hold his life essence. Each individual becomes self-aware whenever the Changing God moves on to another body and becomes known as a castoff.

Now the latest castoff known only as the Last Castoff has started his/her (player picks gender) journey and it’s up to players to guide this character and find a purpose in this strange world. If this seems overwhelming, then just imagine that it’s only a very basic overview of what goes on in the world of Numenera. 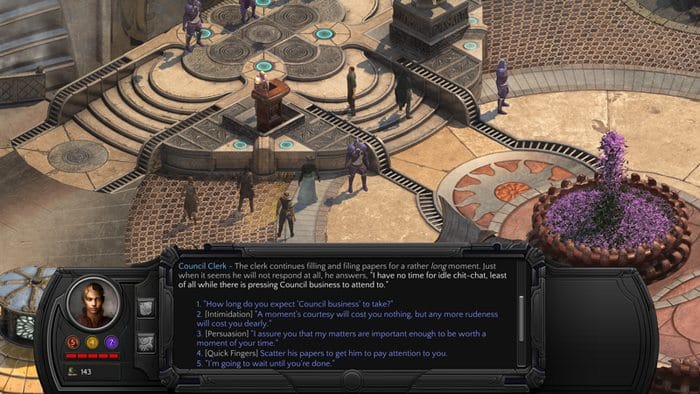 Despite the extensive terminology that comes with getting to grips with a story for such a complex setting, it’s surprisingly easy to get used to playing the title. The beauty of playing such a title is just how much freedom players have when it comes to choosing how they go about their adventure. Those that wish to be aggressive are welcome to start as many fights as possible. Although there seems to be minor issues in terms of path finding and behaviour in general for enemies and other NPCs when fighting. There were several occasions where characters spent a couple of seconds spinning before making any decision or even taking more time that expected to make a decision. Some of these minor issues are only more noticeable when dealing with a large group of enemies. This is due to combat being turn based and the fact that some AI controlled characters might take longer than expected to act. Characters can use a range of abilities to fight and movement for each turn is limited.

Those that wish to take on a more pacifist role can do so and there are even plenty of opportunities to escape fights by completing objectives without fighting. The rather impressive dialogue system provides players with plenty of options to influence how others see the Last Castoff. Some of these dialogue choices provide the ability to convince individuals. This is done by making use of “Effort” points from three different pools (also used in fights with similar effect) and using more of them will increase the likelihood that the character is successful in convincing a character. Being successful in influencing other characters is a valuable asset for those who choose to pursue less traditional outcomes for situations. “Effort” is also used at certain points when interacting with some parts of the environment and being successful in doing so will often result in gaining valuable insights, finding items and so on.

Each quest and side-quest usually has a couple of different ways to deal with it and there are various outcomes based on what players choose to pursue. Sometimes it even results in unexpected outcomes, such as one time where encouraging one individual to confront his fear resulted in him being devoured right in front of the Last Castoff.

Knowledge is power and the Numenera developers really take that to heart. You see, no matter the action, it is often possible to predict its outcome by exploring the current area thoroughly. Even quests that might not seem related to other quests can end up being beneficial in finding information or items that will help completing these other quests. 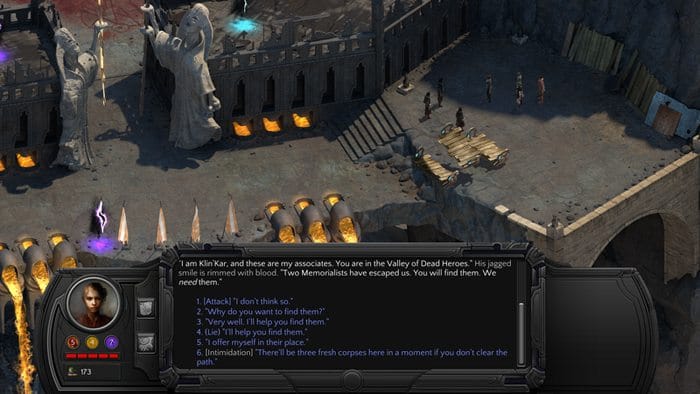 All of this would be for nothing if it wasn’t for the fascinating cast that the player gets to interact with. Each individual has a story to tell that would put to shame those told by characters in lesser role-playing titles. Not even the bizarre nature of some of these individuals spoils this, since the already complex setting just makes their lives more interesting. It’s possible to invite some of these characters to accompany the Last Castoff and learn more about them to the point that players might care for their well being and try to help solve their personal problems.

The detailed manner that events are described and how characters talk is most intriguing. Those that had the pleasure of participating in a dungeons and dragons style role-playing session will no doubt find themselves in familiar territory. You see, the Last Castoff can use personal possessions that belong to his/her fellow castoffs to live out and even alter their “Mare” memories. The manner with which these are described often makes it seem as if players are experiencing these memories in person. The same can be said of most of the text in the title and how it manages to invoke different emotions. There is power in words and that is one aspect where Torment: Tides of Numenera excels in and uses to bring its incredible world to life.

It’s fascinating to witness how accessible the title is despite a complex menu system where different abilities, skills and so on are managed. Those that wish to make full use of such a system can do so with time and patience and will surely reap the rewards by making use of some of these tools to succeed in battle. But at the same time it’s also possible to just play by interacting with others and the locations to progress by finding information.

The amount of side-quests available in each area is nothing short of impressive with each one feeling unique. In fact, some of these side-quests feel more like their own stories rather than just material used to extend the amount of time it would take to complete everything. 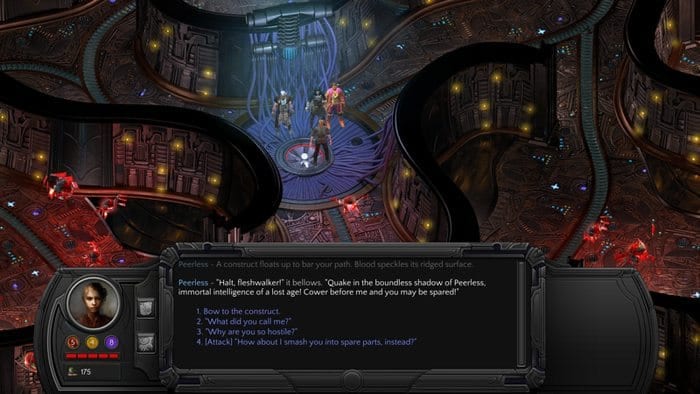 Although some of the areas found in the later portion of the title don’t feel as interesting, their bizarre nature still makes them worth exploring. It’s a shame that it’s not possible to go back to previous areas to complete side-quests once moving on, but it does make some sense given how actions can affect the course of the story.

Despite the combat sections being decent enough to satisfy the curiosity of those that wish to do them, it’s clear that the main attraction here is the story. It’s mind boggling to witness the amount of dialogue options available and how each affects other sections of the title in different ways. Albeit a bit rough round the edges in terms of visuals and some odd user interface choices, there is no doubt that this is one of the most unique role-playing experiences released in years. Just like a board-game, Torment: Tides of Numenera might seem intimidating at first, but give it a chance and it will most likely reward you with its detailed and fascinating bizarre world.

https://www.youtube.com/watch?v=v7XFLFRTGkg Beyond The Wire is probably the closest that video...
Read more
Gaming

If you mention Super Mario Bros to anyone, between...
Read more