In Yoshi’s latest adventure, the small dinosaur has to go up against the dastardly Magikoopa Kamek, in order to rescue his other Yoshi pals, who have been turned into yarn balls. The whole adventure takes place in a knitted world where a pull of a thread is all it takes to unravel whole sections of it. As Yoshi, players are able to use his trademark moves from previous Yoshi titles, such as his handy flutter jump to stay in the air for a couple of seconds and the ability to throw objects at enemies. In this case Yoshi creates balls of yarn from the corpses of enemies he unravels and other objects or parts of the environment in levels. Yoshi can also easily get balls of yarn from dispensers found throughout levels.

Yoshi’s main way to protect himself is to throw the yarn balls at enemies. It’s also possible to make use of other abilities, such as holding down whilst jumping, to make Yoshi stomp anything under him. There are different ways to throw the yarn balls. Although the most effective way is called “Patient” which involves Yoshi automatically moving the trajectory of the yarn ball up and down. The player then only has to hit a button to throw it at the appropriate moment to hit the desired target. Other ways don’t work quite so well, such as one that uses the tilt feature on the Nintendo 3DS handheld to aim the yarn ball, since they make it harder to aim in more sensitive situations, like when trying to aim with Yoshi in the air. The title also has an alternative control scheme, although the default one works perfectly fine. Although a very minor inconvenience, it is odd how the title continues to ask players to check the control scheme and preferred way to aim, after choosing a save file to continue playing. 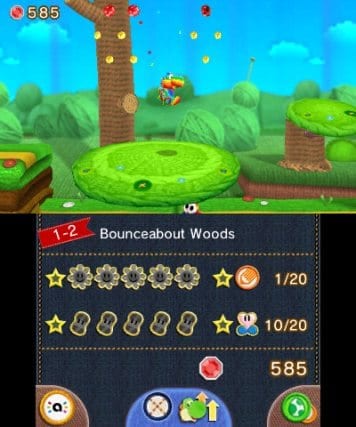 The controls works really well on the smaller handheld though. There are no occasions where it feels like getting hit or even falling into a bottomless pit was the result of an unreliable control scheme. If anything, it feels exactly like playing the Nintendo Wii U version. This is also the case for the port itself as there are no issues whatsoever in terms of lag/frame rate drops or even the overall quality of the title. Obviously, textures for objects and environments aren’t exactly as detailed as they are on the Nintendo Wii U version. But Good-Feel’s colourful woolly world is just as vibrant on the Nintendo 3DS. Every aspect of the title that made it so enjoyable to look at has been perfectly replicated in this version. If anything, it’s impressive to think that the developer managed to port an entire console title to a handheld without having to compromise much beyond some hardly noticeable texture downgrades.

In fact, Good-Feel even managed to add some content that is mainly focused on adorable yarn puppy, Poochy. Defeating the mid-boss for each of the areas Yoshi explores results in a new level starring Poochy. Poochy’s levels are fairly simple and yet can also be addictive due to their competitive nature. The idea is that Poochy automatically moves forward and it’s only necessary for him to jump or duck at the right time to pick up beads and to find miniature versions of Poochy called Poochy pups. Each of the levels can be replayed to complete challenges and to also play an alternate version for one of these levels called Poochy Gold Rush, where Poochy catches golden beads. Using a Poochy amiibo also results in gaining access to additional content. It’s great to see Poochy getting a bigger role in this port, given how enjoyable it was to interact with him in some of the levels from the main adventure.

The main adventure sees Yoshi going through levels within areas that have their own distinct theme. Those new to the woolly adventures of Yoshi are in for a treat as each level has a tendency to make use of a new game mechanic. On one level Yoshi could find himself swinging around with yarn monkeys and then next he could somewhat worryingly be using yarn baby chicks to create paths. There is seemingly no limit when it comes to creativity at Good-Feel. Even in the last area, the team is throwing in a whole level based around affectionate yarn spiders who attack Yoshi by blowing kisses. 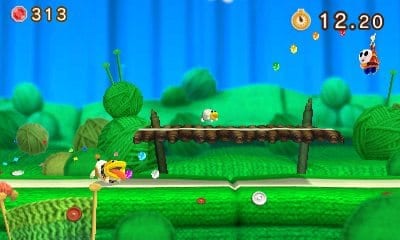 At times Yoshi can even transform into one of various forms, such as a giant version of himself that stomps through a section of a level destroying almost everything in his way. This same positive energy extends to the catchy music tracks that are used whilst playing the title. It’s difficult to not be drawn in to this cheerful world, that the developers have created, for hours on end.

The boss battles are not exactly that hard to complete, but do include some clever ideas to defeat bosses, such as one where Yoshi must trick a piranha plant boss into eating an explosive to expose its weakness.

Albeit not one of the hardest titles out there, it is still very enjoyable to play through the levels. In addition, there are various collectibles like Wonder Wool items and flowers to find within each of the levels. Collecting all the flowers for each area will result in gaining access to a bonus level that might be the challenge some players are looking for. In addition, each collected flower grabbed at the end of a level equals one go on the Poochy Gold Rush mode. A new Yoshi will become available for players to use when every Wonder Wool item is collected in a level. Additional Yoshis can also be obtained by using amiibo figures and by creating new patterns/using existing patterns for custom Yoshis (can be shared via StreetPass) or obtaining user created Yoshis via StreetPass.

Those that feel like they are struggling to finish a level can make use of various tools. One such tool is Mellow mode where a player gains the ability to play as a flying Yoshi that gets help from a bunch of Poochy pups with defeating enemies, providing Yoshi with yarn balls and finding hidden treasures. Anyone struggling in some of the levels in the last areas will find that regular checkpoints come in handy. There are also Power Badge items that can be bought with beads to make it a little bit easier to play some levels or even just collecting items. 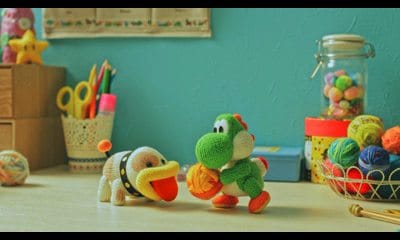 Albeit somewhat trivial, this version of the title also makes use of a Yoshi Theater section where players can view a new short animated clip each day. Players are asked a question to check if they were paying attention to what happened in the short clip and given beads for correctly answering. Admittedly these short animated clips are adorable and worth coming back on a daily basis to view them.

Surprisingly enough, the title does support the handheld’s 3D effects feature, but it is hardly noticeable. The only rare occasions where this changes is when objects in the foreground appear on the screen. In all honesty, it’s not exactly an essential feature and it hardly spoils the experience.

Those that had the pleasure of playing the title on the Nintendo Wii U might have doubts about doing it all over again on another system. However, it’s certainly worth checking out some of the new Poochy content for those that really enjoyed playing the big screen adventure. Anyone new to Poochy and Yoshi’s Woolly World should be pleasantly surprised with an excellent adventure that is as captivating on the Nintendo 3DS handheld’s smaller screen as it was on the Nintendo Wii U.

The original DOOM games were perhaps my first real experience playing the FPS genre, and I have fond memories of my ICT teacher...
Read more

It's time for our Two Minute Review of the VariDesk Laptop 30 from Vari.

Fans of Control can celebrate today with...
Read more
Gaming