I honestly do look forward each year to each WWE2K game release as a huge WWE fan. Since 2K took over the franchise there have been some changes in how the games play and their presentation, with noticeable improvements and some very noticeable issues. With so much happening in the WWE over the last few months, this year’s release has a lot of promise and after having the fortunate opportunity to attend a preview event to get early hands on with the game, I was chomping at the bit to finally get to grapple with the full WWE2K17 experience.

Right from the very moment the main menu appears on screen, fans of the series will notice an immediate stripping back of the traditional menu selection style and instead greeted with a new bare bones style. From the main menu you can now see every game mode and game feature available making it a quick and painless fast track to pick what the player wants to do. This removes the criticism of loading times between the menus which in previous games was rather annoying and a very welcome new way of navigating the game.

The new cleaner style of presentation carries over into the revamped gameplay to WWE2K17. When I played the preview build before release, I was surprised by just how improved the fluidity in grappling and move execution is over last year’s WWE2K16. New animations now makes the action far more smoother than before so it feels less clunky and gives the player a greater sense of control over what is happening in the match. Countering is more impressive with more variation to how different moves can be countered and the reaction times to each counter is more forgiving in this game with some moves even having more than one opportunity to counter it. Moves now look even more polished for each superstar with a real conscious effort to making sure all their well known moves and taunts are faithfully there for players to use. The attention to detail really brings each match to life like never before with the AI controlled opponent working more to deliver a good match than simply pulling off counter after counter which in previous games could really kill a match experience.

Not only has the gameplay been given new finesse but visually this series has simply never look better on current consoles. The game engine has been tweaked and it enhances so much in the game’s presentation when it comes to delivering that WWE TV look that fans will know and see each and every week. Entrances just look amazing for each superstar with their mannerisms captured brilliantly for each superstar. Player models also have been refined far more this year with the closet in game recreation of WWE Superstars yet in the series. Everything just feels more polished and you can feel it in every aspect of a match. Even taunting has been overhauled to go beyond simply having standard ones on the D-Pad. Now when you taunt you activating a healing boost which as will help reduce body damage for a short time which is a great new feature and actually gives a reason and benefit to taunting. It also has a showmanship feel to the taunting, as positional taunting now gives it a real impact on how a player can experience the match. If you are near the corner you will execute a taunt that can either rally the crowd reaction or some great visual taunts to your opponent. 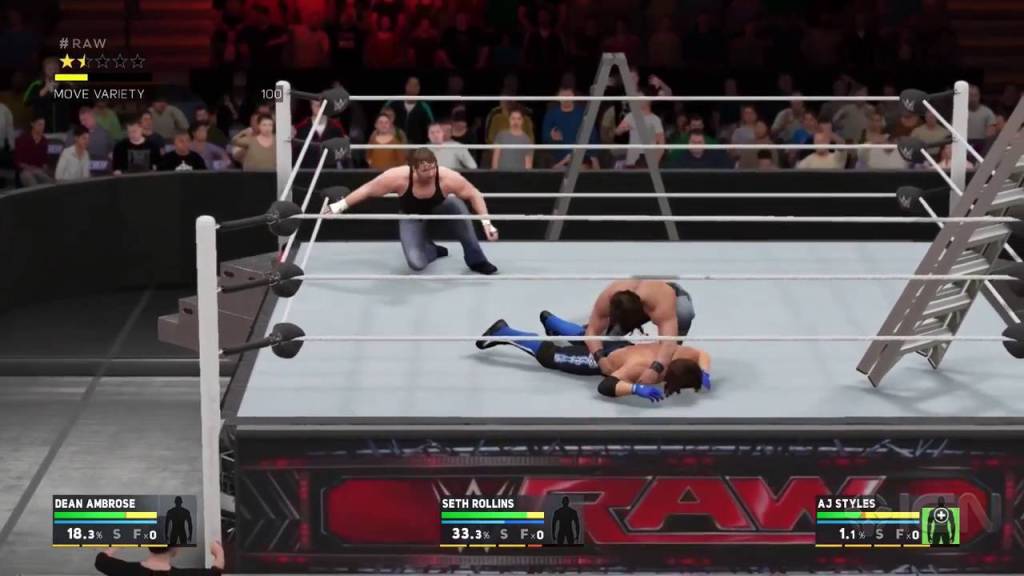 The My Career mode has been given some attention since it was completely overhauled last year. The intention of My Career is to really give the player a true WWE Superstar experience from starting in the WWE Performance Centre as a rookie to working their way through the WWE Championships and one day, the WWE Hall of Fame. Your created superstar can be upgraded using VC points obtained from winning and competing matches each week to improve attributes and add new skills to your superstar. Whilst many of the features in this mode from last year have returned, a really great addition has been made to it for WWE2K17, that feature is cutting your own promo. This is something fans will instantly recognise about WWE and their favourite superstars, the promo. Now players can cut their own promos to help build either their face or heel personas. The new promo system works almost like a conversation wheel, where the game will offer a number of dialogue options which the player can pick and then must then continue with a suitable follow up line to create a great promo. The player can then pick when they want to cut a promo during weekly TV shows such as RAW or Smackdown and really adds something very special to how My Career now plays out.

Universe mode also makes its return and now has the option of different save slots so players can have multiple WWE Universe modes running which can be tailored to run how the player chooses such as who is on which show roster and how each weekly show is put together in terms of matches. Universe mode really allows the player to create their own WWE experience like never before and with the incredible new additions to the WWE Creation suite provide so many options that WWE2K17 really is a true playground for WWE fans.

There really are so many good positives about WWE2K17 for fans to enjoy but it has come at a price this year. Sadly WWE2K17 does not have a Showcase mode this year, something that has been a highlight of the last two games. This year the cover star is Brock Lesnar, which the marketing for WWE2K17 has used to great effect with the Suplex City promotional run but as a result, he does not have a Showcase mode. Previous cover superstars such as Stone Cold Steve Austin last year, had a showcase mode that allowed players to relive the iconic matches and moments throughout their career in the WWE. Now the developers have said that the reason for the omission this year is simply because many of the great matches Lesnar has had feature opponents they could not feature in the game and therefore would be a disservice to fans to put a half a credible mode into this years game. The absence is a real shame and is a noticeable one. But the other game modes have been improved enough to not make it a deal breaker for fans I feel. 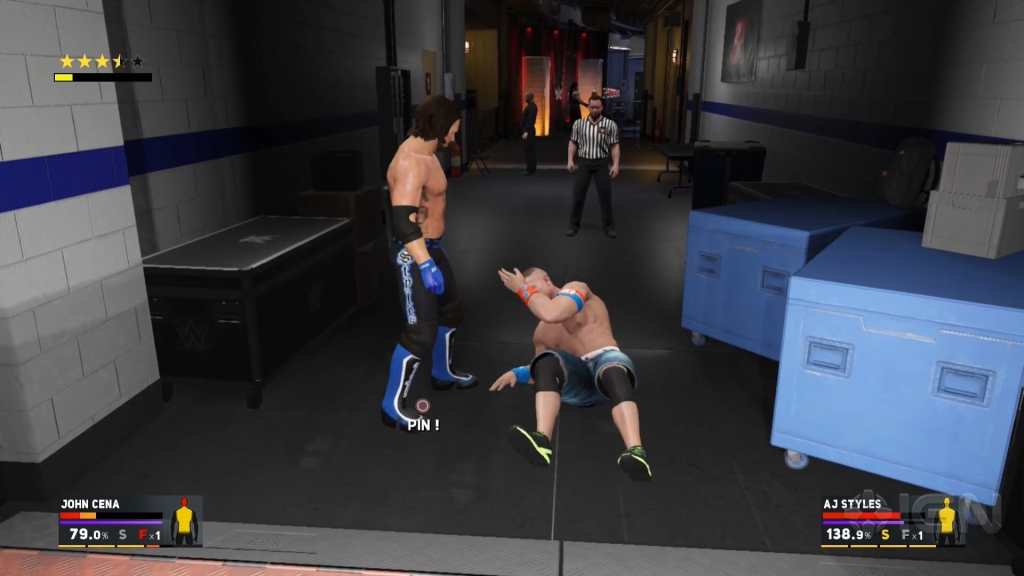 WWE2K17 really brings the WWE experience home to fans in the best way yet this year. Presentation makes it all feel as close to how WWE put their TV output together which adds more authenticity to this year’s edition in the series. The roster is up to date as much as it could be and now includes more NxT and Women’s wrestlers than any previous games and finally includes Sasha Banks, Charlotte and Becky Lynch and many others that fans were unhappy were missing from WWE2K16. Matches feel far more natural and fluid when playing against the AI with a real focus on delivering to fans the opportunity to create their very own WWE experience. The return of back stage brawling is a welcome one and the tweaks to the control system such as a much easier way of selecting a target during multiple superstar matches gives it a more smoother feel. The controversial submission system from last year can now be turned off and replaced by a QTE button mini game from the options menu which will no doubt come as a sigh of relief for many fans. The ladder match mini game brings a nice new level of difficulty without being a hindrance and the new taunting system is just great fun to do in matches. This year there are far more positives to be happy about than negatives but still suffers from not really being in tandem with what fans will see on WWE TV such as the brand split and new titles not being in the game but thanks to community creations, these titles can be downloaded for free and used in the game and Universe modes. It would be nice to see an official update for such things going forward with this series just as other sports games have  but with WWE comes licensing issues that need to be addressed before any inclusion at that level but hopefully that can become easier going forward.

WWE2K17 offers a vast amount for WWE fans and fans of the series this year and for me is really getting close to being the very best the series can be now in terms of quality and features offered. The WWE support this game series so well with the excellent vignette videos seen in My Career to the access they give the developers to the superstars in order to bring them to life in the game for fans.

This year it is most definitely worth a trip to Suplex City, just try not to upset the Mayor or you might suffer an F-5 you won’t forget!

Sean McCarthy
Freelance writer but also a Gamer, Gooner, Jedi, Whovian, Spartan, Son of Batman, Assassin and Legend. Can be found playing on PS4 and Xbox One Twitter @CockneyCharmer
Previous articleReview: Dead Synchronicity: Tomorrow Comes Today
Next articleFarming Simulator 17 out for PC/Xbox One and PS4 next week