You gotta hand it to Sega for not giving up on the Sonic Boom brand. After all, the Nintendo Wii U title was a disaster in every way possible and the first Nintendo 3DS title wasn’t exactly the return to glory that the hedgehog deserved. Still, the cartoon is probably faring better and that is most likely why the publisher went ahead with getting Sonic Boom: Fire & Ice developed for the Nintendo 3DS.

This time round, the bandages obsessed group of alternate Sonic characters finds itself tackling global warming the Sega way. Various fissures have been popping up all over the land of the Sonic Boom world. It’s up to Sonic and his injury prone pals to close these up by performing some rather bizarre acrobatics. The twist is that doing so results in the characters gaining the ability to either melt or freeze blocks found within the levels.

As the characters continue to plug these dangerous holes, it becomes clear that the level design is average at best. Despite being like a classic 2D Sonic platform title and offering the option to take different routes in each level, it still feels like it lacks the creativity that made the original Sonic titles so memorable. Instead levels take place in glamorous locations such as a gothic castle and a tar pit. The level design itself is not particularly impressive and there is a tendency to reuse the same obstacles in levels. Not even the addition of the fire and ice based obstacles makes much of a difference, since they are usually more of a nuisance than a welcome challenge. 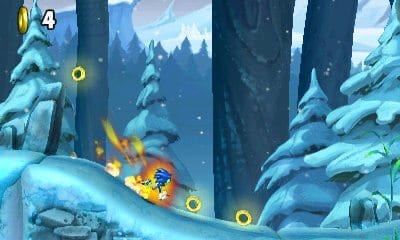 The inclusion of challenge rooms inside the main levels is confusing, given that they are more like a distraction from the main goal and players will most likely ignore them. Occasionally there are also boss battles and albeit simple, these are one of the better aspects of playing the title. This is due to the fact that it involves getting to observe the way bosses operate, finding a weakness and then exploiting it. It helps that the bosses are usually massive and the two screen are put to good use to demonstrate this.

Additional optional levels with different challenges are included as a way to extend the amount of time that it takes to complete everything. Given the lack of creativity in the main story levels, it’s not a surprise that most of the challenges in the optional levels are not particularly interesting. Most of these optional levels revolve around using vehicles to complete them. The use of imprecise controls to for example move a hovercraft makes avoiding obstacles more challenging than it should be. Those inclined to do so can also find collectibles in levels and make use of them to unlock content that isn’t really essential to complete the story.

Whilst completing the main levels, Dr Robotnik or Dr Eggman as the young ones will most likely call the mad scientist, randomly picks up Sonic and takes him to a location to participate in races with his robots. These races don’t last that long and consist of three laps in a course filled with obstacles. As seems to be the theme of the title, all the courses look too similar, which at least makes some sense given that they take place in the same location. The races are not particularly challenging which makes winning feel more like a chore that must be completed to get on with the story. Another cruel twist given that these racing robots are one of the main reasons why the world of Sonic Boom is under threat from severe weather hazards. The inclusion of these races also means that players can use robots to race against each other by making use of the Nintendo 3DS local play feature. The green crystals that are gained from completing levels and certain goals are used as currency to buy extra racing robots with different stats.

Another issue is how clumsy the control scheme feels when playing the levels. Characters tend to move in an awkward manner that usually makes it difficult to stop them from falling into traps. It certainly doesn’t help that the directional pad is not provided as an option to move the characters. Each of the characters also has a special ability and the imprecise movement controls makes it frustrating to use some of them.

It’s difficult not to notice the lack of attention to detail, such as blurry textures being used in levels like the ones found in the Cutthroat Cove, which somewhat spoils the whole experience. The visuals look dated and like they might have made a better impression if the title had been released a few years back. In a way, it’s almost like this is a Chinese knock off and not a Sonic title published by Sega. Unfortunately, it’s also lacking in the audio department with most music tracks sounding too similar. 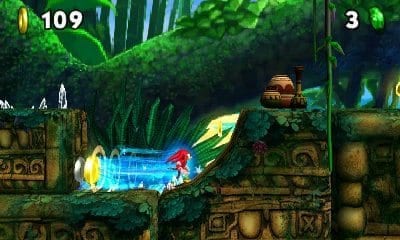 Despite the fact that the script feels like it’s been lifted off an episode of the Sonic Boom cartoon, it’s still not a valid reason to explain why most of the story consists of chasing after a small robot. Despite the inclusion of the fissures and crazy weather, the plot never manages to make good use of these mysteries to provide a valid reason to stick around to the end. In fact, it’s easy to know exactly what is going on not too long after playing the title. The dialogue is also not particularly interesting and feels like it’s trying too hard to amuse players with forced jokes.

Whilst not as catastrophic as the Nintendo Wii U title, it is disappointing to witness how the title never tries to be anything more than average. It’s quite likely that this is aimed at the young audience who may have an interest in the cartoon, but that still isn’t a a valid excuse to ignore the various flaws encountered. Sonic Boom: Fire & Ice is not the worst Sonic title, but it’s also one that will not offer a memorable experience in the few hours it takes to complete the main story.

Murder mysteries haven't been this ham acted since Scooby Do. Can you solve the mystery before the ghost kills again?

A common misconception is that the length of a game tells you the quality of said title.

The war genera is one of the most heavily delved upon topics in the video game medium, with World War II in particular being adapted to the video game format more times than I can count.

You play as Skul, the titular hero and meager skeleton, who would be nothing more than a forgettable enemy in most games. Here, though, Skul has been refashioned into a proper hero replete with magical abilities and enchanted items. And revenge against the usual protagonists feels so good.

A familiar tactical RPG where you must take on the Reaping and survive.

Here is our review of the Ninja Foodi 9-in-1 Multi-Cooker.

Turn the tides of battle with the power of...
Read more
Gaming