To celebrate the release of Scream Queens The Complete First Season on DVD, we’re giving away three copies. 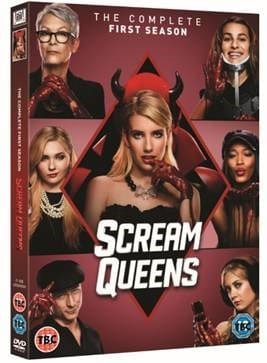 From the mind of Ryan Murphy (creator of Glee and American Horror Story) SCREAM QUEENS is shiny, gory, ridiculous and wickedly funny. A mysterious “Red Devil” killer wrecks havoc at Wallace University’s Kappa Kappa Tau sorority, putting every pledge on edge! Tension mounts as it becomes clear that anyone could be the murderer – or indeed the next victim…

We have three copies of Scream Queens The Complete First Season on DVD to giveaway.

SCREAM QUEENS, TV’s most mischievous and addictive new series when it arrives on DVD from 26 September 2016.

Andrew Edneyhttp://moviesgamesandtech.com
I am the owner and editor of this site. I have been interested in gadgets and tech since I was a little kid. I have also written a number of books on various tech subjects. I also blog for The Huffington Post and for FHM. And I am honoured to be a Microsoft MVP since January 2008 - again this year as an Xbox MVP.
Previous articleWin The Nice Guys on Blu-ray
Next articleSuper Dungeon Bros release date announced

Families and children can now easily discover a wide range of entertaining and educational shows and films, with the launch of a new children’s experience on BBC iPlayer.
Read more
Movies & TV

To celebrate the release of SUPERMAN: RED SON on DVD and Blu-ray, we are offering you the change to win a copy on Blu-ray.
Read more