Batman: Return of the Caped Crusaders in cinema for one night only

Holy One Night Only! Batman: Return of the Caped Crusaders is coming in to cinemas nationwide for one night only on 17th October.  Starring the legendary Adam West (Batman), Burt Ward (Robin) and Julie Newmar (Catwoman) this is an evening not to be missed.

You can find your nearest cinema showing the film and book tickets now by using this simple app: http://po.st/HolyCinemaBookingBatman

The film will also be available on Blu-ray and DVD 7th November and Digitally from 24th October. 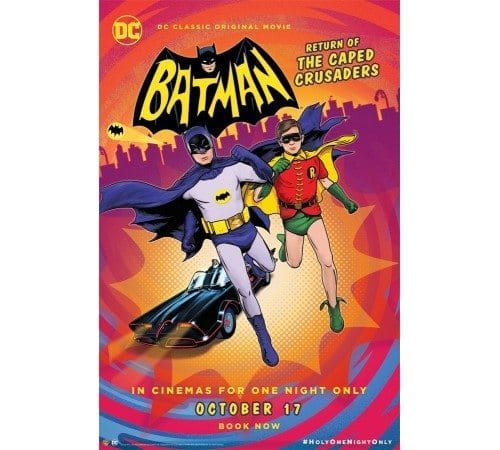 It’s back to the 1960s as Batman and Robin spring into action when Gotham City is threatened by Batman’s most-evil opponents – The Penguin, The Joker, Riddler and Catwoman. The four Super-Villains have combined their wicked talents to hatch a plot so nefarious that the Dynamic Duo will need to go to outer space (and back) to foil their arch enemies and restore order in Gotham City.

A Classic Cadre of Voices” featurette – A new talented cast of actors join Adam West, Burt Ward and Julie Newmar in Batman: Return of The Caped Crusaders. Go behind the scenes and witness the vocal techniques and timing needed to deliver a classic Bat-Comedy

Batman: Return of the Caped Crusaders pays homage to the original Batman series, reuniting Adam West, Burt Ward and Julie Newmar as they reprise their roles as Batman, Robin and Catwoman.

Chris Hare
A True Tech Geek at Heart, I Started my life of being a Tech Geek at the age of 5 with the BBC Micro. Went on through most of Nintendo stuff and now a Xbox and PlayStation fan. I also leaked the information about the leaked Hotmail passwords story from October 2009 that went World Wide. I Started writing tech articles at the beginning of 2011, most of my articles are about Android phones and Xbox One and PlayStation 4 and other gaming news. When Chris has free time its with the family.
Previous articleToday ‘Forgotton Anne’ has been revealed at EGX 2016
Next articleStreet Fighter V Adds Urien, Daily Targets, Versus CPU Mode, and More