Kick & Fennick is a platform title developed by Dutch indie studio Jaywalkers Interactive. Whilst it is not unusual to see such a title being developed these days, it’s still commendable to see a developer creating a new platform title.

It all starts when a boy called Kick is awakened after having probably spent a considerable amount of time in stasis within what looks like a cryogenic chamber. He soon not only finds the world around him in ruins, but he also manages to attract the attention of a dangerous giant robot guard. Fortunately Kick is saved by a floating worm like robot called Fennick. The two of them then go on the hunt for a replacement part needed to fix poor Fennick, after Kick notices that the small robot is damaged.

The quest for a replacement part is pretty much the main event of the story. In fact, there isn’t a whole lot of story given that the characters don’t speak. It’s a shame since it would have made it more interesting to at the very least get a small insight into why the whole area looks so desolate and there is no sight of other living human beings. 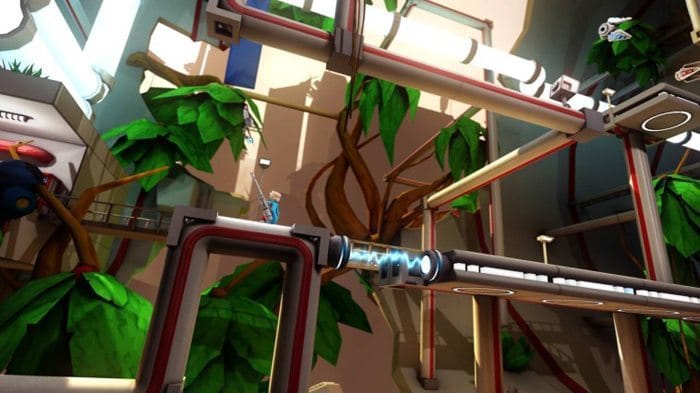 The title itself is split up into chapters and each chapter contains several levels for the characters to complete. Although levels found in some of the later chapter contain complex puzzles, they still feel quite short most of the times. It doesn’t help that the levels all look too similar and at times it just feels like the same backgrounds are being used over and over again for most of the levels. Not even the colourful environments help since they all start to look the same after a couple of levels.

The one real change comes from the occasional fight with the title’s only giant robot boss who occasionally checks in with the characters for a quick fight and catch up.

Even the addition of the occasional new gimmick, such as a ramp that automatically moves the character forward, doesn’t help much since the level design makes it difficult to enjoy playing the title. The idea is to make use of a rather large weapon Kick carries to get through different obstacles in each of the levels. The weapon comes in handy since Kick can’t jump. Instead the weapon is used to propel the boy in any direction and it can also be used to shoot small rogue robots and weak walls/switches found in levels.

The problem with these weapon abilities is that they are mapped to the same analog stick on the controller. This makes it far too easy to sometimes propel the character instead of shooting and vice versa. It’s problematic given that some of the obstacles found in advanced levels require precise use of these abilities to get through to the end of the level.

There is also a restriction set on the weapon in that it can only be used a limited amount of times when in the air. So it means having to think ahead when using it to propel the character through an obstacle such as an area full of electric wires. At least time slows down for a few seconds when holding down the desired direction in the analog stick where the character should end up.

It’s not possible to have direct control over the character once he’s been propelled in the air. It’s problematic given that there are times when poor Kick just misses the platform that he needed to land on. The limited amount of times the propel move can be used when in the air also means having to watch the boy fail many times. 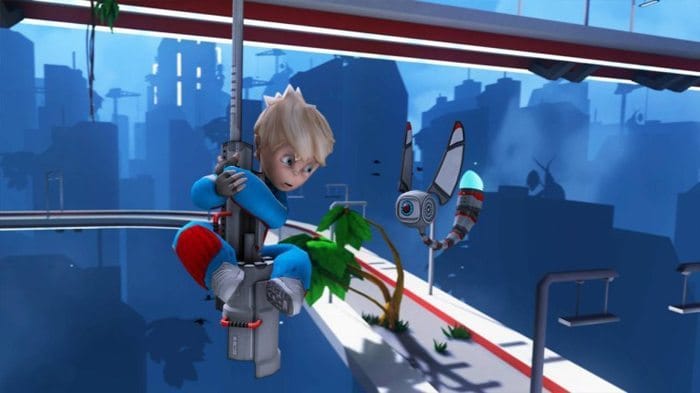 At least Fennick can rescue the boy and bring him to the last safe platform that he was on. Although this feature is a little bit unstable given that the closest platform the character is last standing on isn’t always the one used.

In-game collectibles and objectives are included as an incentive to keeps players going to the end. These don’t help much since, like the story and the repetitive environments, they don’t seem to do much in terms of adding variety to the title. Instead it just makes it clear that despite having five chapters filled with levels, this is a platform title that is not able to keep players amused for a long time. Not even the addition of underwater sections midway through the title make it any less dull. Levels are completed without any remarkable sights that makes them memorable. In a way, playing this title feels a lot like working a menial job where one barely remembers what has been accomplished at the end of the day since it really doesn’t matter.

Kick & Fennick starts off as a decent platform title with some nice ideas. However, it is soon clear that it doesn’t have a lot to offer.