The original Homefront is definitely a game with a tarnished name. I have a handful of fond memories of some decent multiplayer that even employed some new ideas. For some reason my only memory of the single player campaign is of wandering around a makeshift farm crafting from the finest junk. Sadly what was probably a 10 minute sequence sticks in my memory largely because the game was only about 3 hours long. I’m all for quality over quantity but that’s close to insulting. You would think then that the new Homefront might want to distance itself from that. Well aside from avoiding calling itself Homefront 2 and opting for Homefront: The Revolution there is little evidence of moving away from that past. 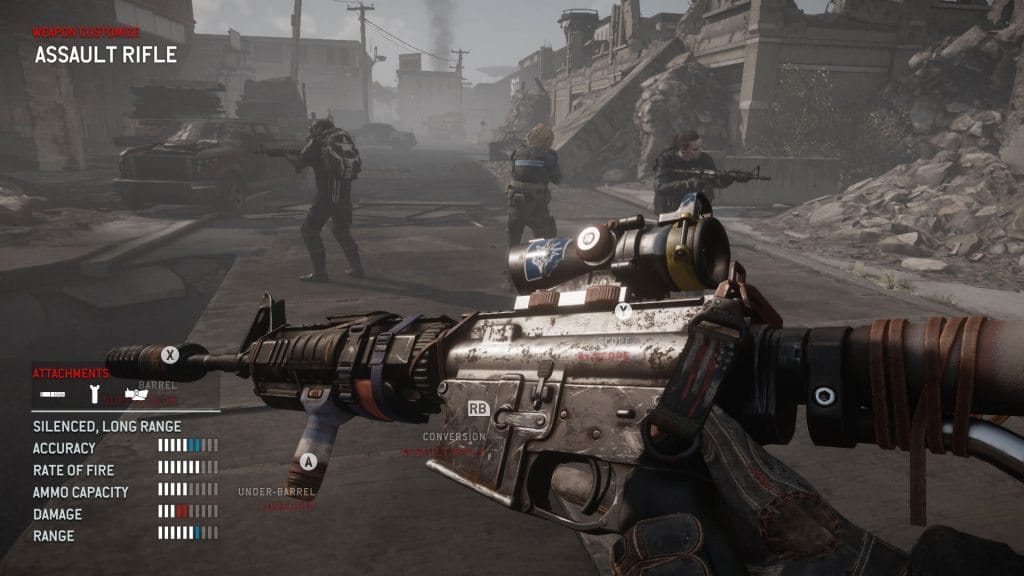 So with all the memories of the prequel unfortuna tely fresh in my mind I got my hands dirty and took my first steps into the world of revolution. Turns out the rebels lead a strangely mundane life considering they are almost constantly persecuted by phenomenally well equipped soldiers. I literally spent the first hour walking from checkpoint to checkpoint soaking up the supposedly hard-hitting gritty atmosphere. There’s no doubt there are some horrendous moments that make you wince but the substandard voice acting in between instantly brings you back out of any atmosphere.

As do the tedious objectives that give your introduction a painfully slow pace. The map is awkward to follow and there are no signs of intuition or user friendliness. There’s also some weird stealth mechanic in play that allows you to fail if you approach too close to any of the guards. With only the ability to walk and follow way points it’s difficult to see the point and just confuses the situation. It’s slow as it is all you need is to fail and have to replay sections.

Input lag is another thing I found to be a serious issue. It took a good second or even more before my camera would start turning and while not unworkable it does make Homefront overly clunky. But that keeps well with the rest of the controls in all honesty which are just bizarre or plain wrong. I can think of thousands of better layouts from basically any FPS that would be better on my trusty 360 pad on my PC. It’s hardly an uncommon setup to account for.

The game takes a huge chunk of that first hour just to tell you the buttons which in all honesty shouldn’t even have been something that needed describing at all. I want to pick up a pad and instinctively know what to do and how to control my character. Or have something like on screen buttons like Hitman. In fairness Hitman goes against quite a few conventions but screen prompts are minimal and effective as I rarely hit the wrong button. Homefront frequently requires me to check and see how to do a task or press all the wrong buttons first. 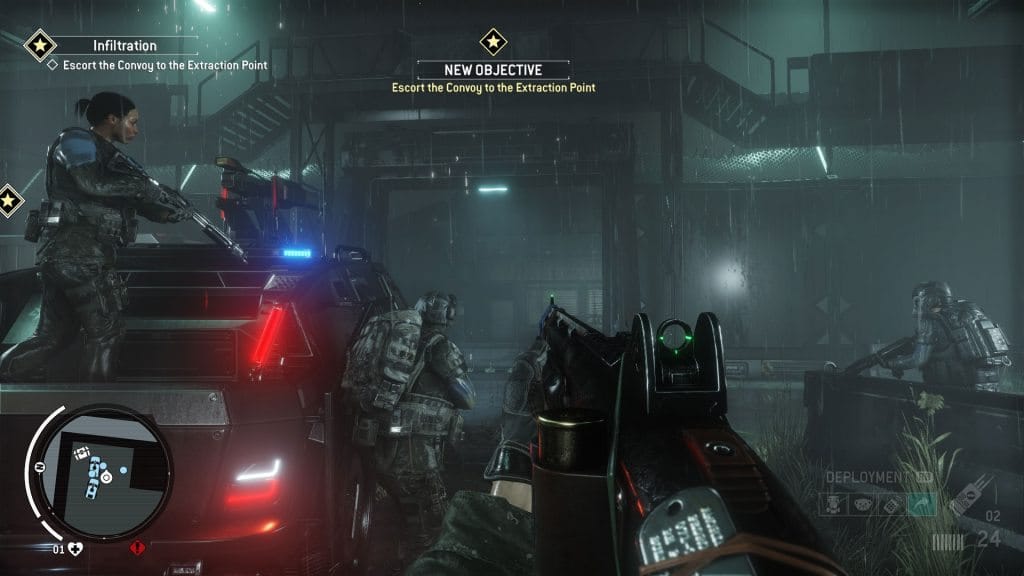 Eventually I got some action and things just keep getting worse. A gun and an off-road motorbike. What more does an aspiring rebel need? I was a bit surprised by the extent of the gun mod I was provided with at first given that you casually remove the entire slide of the gun and replace it with another which makes it an automatic SMG. Is that how guns work? I’m no gun owner but I have my doubts on this one. Either way it is kinda cool and was the first thing I did in Homefront that I actually enjoyed.

Firing the weapon on the other hand is a totally different story. It feels dated and awkward. There is none of the light responsive feel of FPS’s from the last decade or so of gaming. Aiming down sights is hideously limiting and the view I found very restrictive. Recoil is massive and I just generally didn’t enjoy using the weapons in any way. Other than constantly converting it from a pistol to an SMG, when I remembered the buttons correctly.

Riding the bike around the map is pretty much the same story. It’s sort of cool and the idea is nice but the actual control system let’s the whole thing down. Flying up homemade wooden ramps across gaps, sliding off the bike and engaging the guards with their superior equipment could have been, and should have been, a joy. But it doesn’t work like that. You’re not given the tools to create that fun in any way. And even the tools you are given aren’t even close to the best they could be. 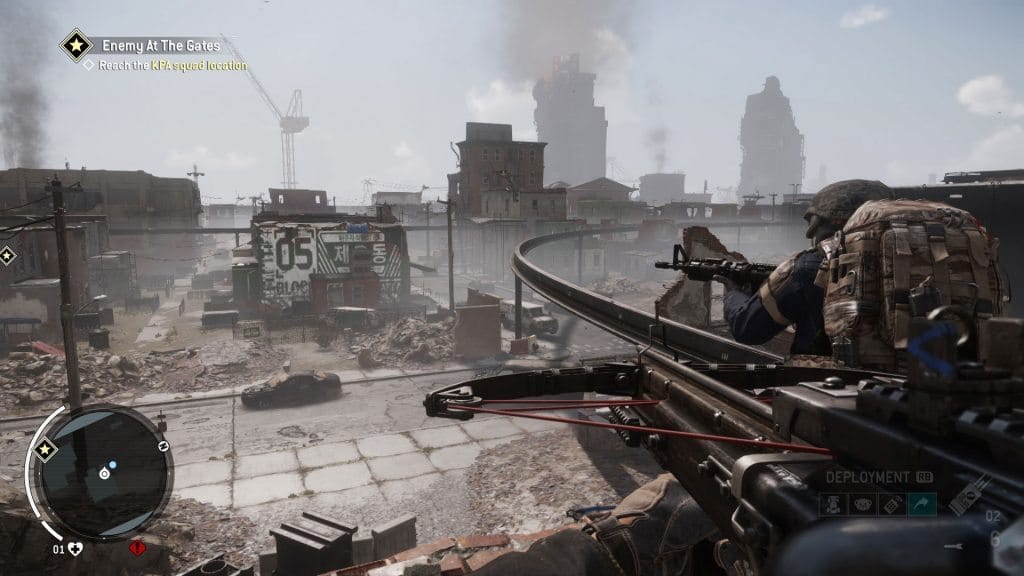 Poor voice acting and a complete lack of pacing make sure you never really get sacked into the gritty atmosphere that could have been a big part of Homefront. You just miss out on it because you’re constantly sick of yet another badly scripted cutscene featuring ‘whoever that is’ and ‘what’s-his-face’. It makes it difficult to care. But the worst sin in Homefront is in the control systems and the mechanics. It feels dated and cheap. The control system appears to have had as little attention as the pacing of the game. Having to remember buttons all the time is a pain and once again drags you out of the experience and input lag on this level is just appalling.

There’s really no redeeming features in Homefront that I can think of. It looks pretty nice but to say looks aren’t everything is an understatement in this case. I never even got chance to enjoy them because I was having such a bad time. Wasted opportunity to refresh a franchise that did have potential. I can’t recommend Homefront to anyone really if I plan on sleeping tonight. Save your hard earned money and give this one a miss.

phillvine
Phill has been the director of a small IT repair business since 2011 which he runs alongside studying for his degree in Information and Communication Technologies at the Open University. Video games are his real passion and they take up more of his time than he'd like to admit.
Previous articleReview: ACWorldwide Starwars Stormtrooper Bluetooth speaker
Next articleWin RAMS on Blu-ray