To celebrate the release of Heroes Reborn on Blu-ray and DVD, we’re giving away three copies on DVD. 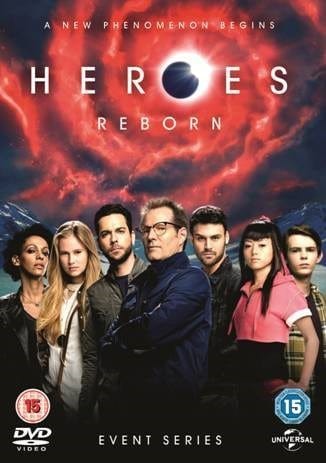 Heroes old and new unite as Tim Kring and Universal Pictures (UK) bring epic 13-episode event series Heroes Reborn to Blu-ray and DVD from 9 May, alongside a box set combining Heroes Reborn and the original four seasons of Heroes.

Picking up several years after the original series and 12 months after a terrorist attack in Odessa propelled anyone with extraordinary powers into hiding, the world is a dangerous place. Vigilantes are hunting down the super-powered population as they seek retribution for Odessa and those with nefarious motives pull strings from afar.

Two such vigilantes include Luke (Zachary Levi, Chuck) and Joanne (Judi Shekoni, The Twilight Saga: Breaking Dawn – Part 2), who are seeking to avenge a tragic loss. Noah Bennet, a.k.a. H.R.G. (Jack Coleman, Heroes), has gone off the grid, but conspiracy theorist Quentin Frady (Henry Zebrowski, A to Z) finds him and opens his eyes to the truth behind the Odessa tragedy.

Also returning to the Heroes fold are Hiro Nakamura (Masi Oka), Matt Parkman (Greg Grunberg), Mohinder Suresh (Sendhil Ramamurthy), and the Haitian (Jimmy Jean-Louis), amongst others.  Together, their ultimate destiny is to save the world, and mankind, all over again.

We have three copies of Heroes Reborn on DVD to give away.

A must-watch for sci-fi aficionados as well as fans of the original series, Heroes Reborn explodes onto Blu-ray and DVD from 9 May, 2016.

Andrew Edneyhttp://moviesgamesandtech.com
I am the owner and editor of this site. I have been interested in gadgets and tech since I was a little kid. I have also written a number of books on various tech subjects. I also blog for The Huffington Post and for FHM. And I am honoured to be a Microsoft MVP since January 2008 - again this year as an Xbox MVP.
Previous articleThe next Battlefield game is called Battlefield 1 set in World War 1
Next articleReview : Micro Drone 3.0

The moment is finally here as the...
Read more
Movies & TV

We have finally reached the final normal...
Read more