To celebrate the release of Sicario on DVD and Blu-ray, we’re giving away three copies on Blu-ray. 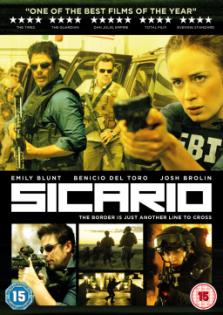 When FBI agent Kate Macer (Blunt) uncovers a Mexican cartel’s house of death, her shocking find causes shockwaves on a personal and global level. Kate is recruited to join a covert black ops mission headed by a mysterious Colombian operative known only as Alejandro (Del Toro) along with shadowy agent Matt Graver (Brolin).

Even as Kate tries to convince herself she’s on a hunt for justice, she is thrust into the dark heart of a secret battleground that has swept up ruthless cartels, kill-crazy assassins, clandestine American spies and thousands of innocents.  The jagged line of the U.S. and Mexican border is now awash with some of the most pressing issues of our time: drugs, terror, illegal immigration, corruption and an escalating swathe of violence that has left people on both sides frightened and vigilant.

With mesmerising cinematography from 12-time Oscar® nominee Roger Deakins (True Grit, No Country For Old Men), and an outstanding supporting performance from Jon Bernthal (Ant Man, Fury) SICARIO is the perfect action thriller to kick off the New Year.

We have three copies of Sicario to give away on Blu-ray.

SICARIO, the white-knuckle thriller of 2015, blazes onto Blu-ray, DVD, and digital platforms from February 1st, 2016, courtesy of Lionsgate Home Entertainment.

Andrew Edneyhttps://moviesgamesandtech.com
I am the owner and editor of this site. I have been interested in gadgets and tech since I was a little kid. I have also written a number of books on various tech subjects. I also blog for The Huffington Post and for FHM. And I am honoured to be a Microsoft MVP since January 2008 - again this year as an Xbox MVP.
Previous articleHitman beta comes to PS4 on 12th February
Next articleWin The Program on Blu-ray

Wales Interactive, acclaimed for its FMV games and narrative-driven...
Christmas 2021

With Christmas not too far away now, we are...