To celebrate the release of Toast of London Series Three on DVD on Boxing Day, we’re giving away two copies! 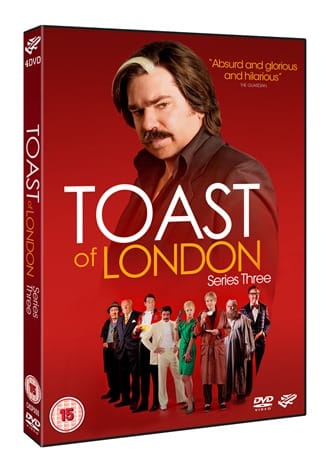 The third series of the BAFTA and Rose d’Or winning comedy, Toast Of London, sees Matt Berry play Steven Toast, an eccentric actor with a chequered past who spends more time dealing with problems off stage than performing on it.  Written by Arthur Mathews and Matt Berry, the supporting cast includes Doon Mackichan, Robert Bathurst, Tracy-Ann Oberman and Harry Peacock.

We have a two copies of Toast of London Series Three on DVD to give away.

Andrew Edneyhttps://moviesgamesandtech.com
I am the owner and editor of this site. I have been interested in gadgets and tech since I was a little kid. I have also written a number of books on various tech subjects. I also blog for The Huffington Post and for FHM. And I am honoured to be a Microsoft MVP since January 2008 - again this year as an Xbox MVP.
Previous articleWin Peep Show Series Nine on DVD
Next articleWin Black or White on DVD