Win Lessons in Love on Blu-ray

To celebrate the release of Lessons in Live on DVD and Blu-ray, we’re giving away three copies on Blu-ray! 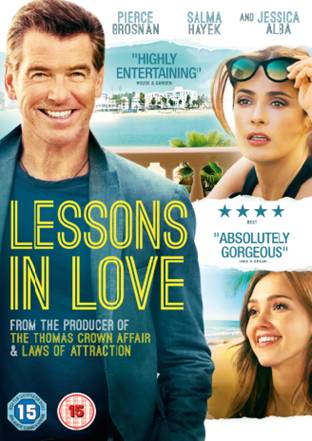 By day, Richard Haig (Brosnan – A Long Way Down, Mamma Mia) is a successful and well-respected English professor at renowned Trinity College in Cambridge, teaching 18th century romantic poetry. By night, he follows in the footsteps of his father (Malcolm McDowell – The Artist, Amazon Prime’s Mozart in the Jungle), indulging in his own romantic fantasies with a steady stream of beautiful undergraduates. Longing for something a little more meaningful after a life of Byronic excess, he’s delighted when his 25-year old American girlfriend Kate (Alba – Entourage, Valentine’s Day) reveals that she’s expecting a baby.

Looking forward to having a family of his own, starting a new chapter in his life, and being a father his children can be proud of, Richard seems to have it all; but there’s just one problem- progressing with Kate means meeting the family. And that includes her older sister Olivia (Hayek – Savages, Grown Ups)… who he just can’t seem to get out of his head.

Relocating to Malibu, Richard settles into a seemingly idyllic family life. That is, until Kate confesses she’s fallen for a younger man, Brian (Ben McKenzie – TV’s The OC, Gotham) and the impending divorce means he has to navigate the immigration red tape. Desperate to avoid deportation, he’s forced to face up to his past mistakes (and some new legal troubles) in order to fight for his family… and Olivia.

A rom-com with a brain, LESSONS IN LOVE features Hollywood royalty in a smart, wistful and hilarious story about love, family and the power of a good Mexican lawyer.

We have three copies of Lessons in Love on Blu-ray to give away.

Andrew Edneyhttps://moviesgamesandtech.com
I am the owner and editor of this site. I have been interested in gadgets and tech since I was a little kid. I have also written a number of books on various tech subjects. I also blog for The Huffington Post and for FHM. And I am honoured to be a Microsoft MVP since January 2008 - again this year as an Xbox MVP.
Previous article‘Life Is Feudal’ the medieval Minecraft?
Next articleHere is the list of backwards compatible 360 games

You heard it from the grapevine folks; Garden Story is the sweetest, most wholesome ARPG of 2021 that’ll leave you feeling good to the core.
Gaming

It is fair to say that Sony have been...