To celebrate the release of Admiral on DVD, we’re giving three lucky winners the chance to bring home the DVD! 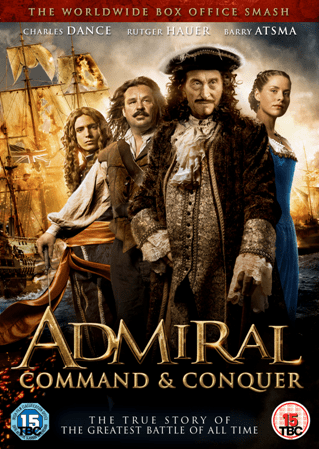 Charles Dance (TV’s Game of Thrones, The Imitation Game) and Rutger Hauer (Sin City, Batman Begins) star in ADMIRAL, the epic adventure about a 17th century Dutch admiral who must lead his fleet to defend his homeland from the terrorising forces of England.

Admiral Michiel de Ruyter is the most famous, and one of the most skilled admirals in Dutch history, most celebrated for his role in the Anglo-Dutch Wars of the 17th century. He was held in the highest esteem by his sailors and soldiers, who used the term Bestevaêr (Grandfather) for him, as a result of his disregard for hierarchy and his refusal to back away from risky and bold undertakings despite his usually reserved and calculated nature.

Get swept away with this visually stunning, swashbuckling story of legendary naval battles, civil war, and one of the most fearless admirals of all time!

We have three copies of Admiral on DVD to give away:

The contest ends at 12.00AM on 17th August, ADMIRAL sails onto digital platforms from 27th July, 2015 and DVD from August 3rd, 2015 courtesy of Signature Entertainment.

Andrew Edneyhttps://moviesgamesandtech.com
I am the owner and editor of this site. I have been interested in gadgets and tech since I was a little kid. I have also written a number of books on various tech subjects. I also blog for The Huffington Post and for FHM. And I am honoured to be a Microsoft MVP since January 2008 - again this year as an Xbox MVP.
Previous articleGet ready for “Zombi” coming to PS4,Xbox One and PC
Next articleExclusive Interview with Bruce Greenwood