The new Rockstar Energy Car Pack is now out for Forza Horizon 2 on Xbox One.

The Rockstar Energy Pack includes an array of cars that are just waiting for their chance to kick up a cloud of dust. Built for the dirt-filled circuits of the Red Bull Global Rallycross series, Tanner Foust’s Global Rallycross 2014 Volkswagen Beetle GRC is an ideal mixture of pure power and serious grip. In the woods or on the road, the newest Subaru WRX STI is ready for action; for luxury cruising there is no match for the “Ultimate Driving Machine,” the BMW 850CSI.

The free car for March is the Acura Integra Type-R, a high-revving, front-wheel-drive masterpiece that will have many JDM fanboys jumping for joy.

The Rockstar Energy Car Pack is available from the Xbox Live Store for £2.43. 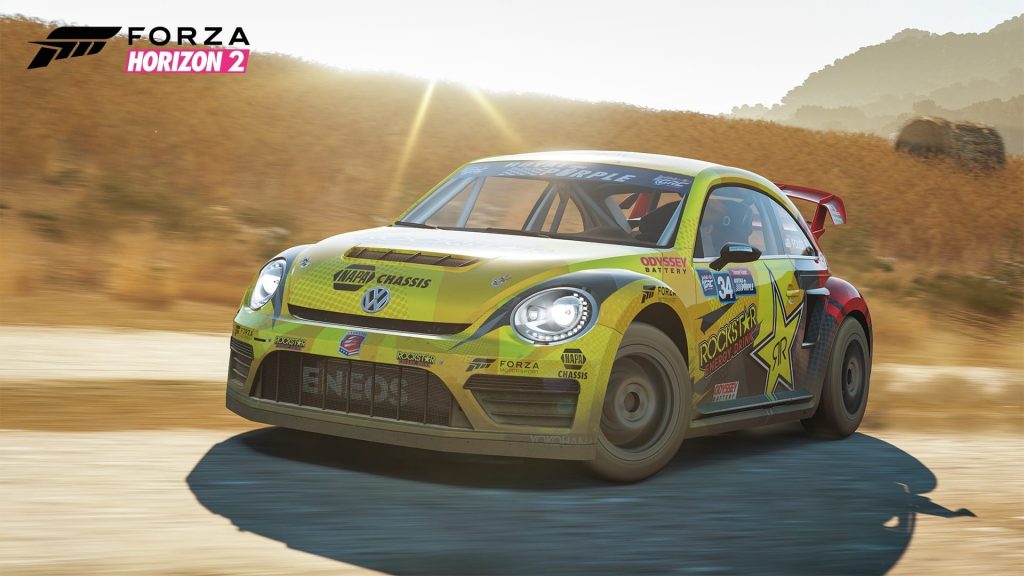 Foust, who was sponsored by Xbox and Forza during the 2014 GRC season, debuted the Beetle GRC at the Los Angeles leg of the 2014 Global Rallycross season and drove it the rest of the year to develop it to compete in 2015. In a straight line, this Beetle will see 0-60 in just over two seconds. In the corners, it drifts and cuts a turn with precision on any surface. It’s a Forza first, and Forza Horizon 2 is the perfect environment to give it a good thrashing.

Out of the box, the STI is fast and has intuitive with incredible handling. The heart of the 2015 WRX STI is still the faithful EJ motor. The sound it makes, the way it the turbo spools up and sets you back in your seat, and the steady stream of power are proof enough there is no reason to fix what isn’t broken.

In its day, this was BMW’s ultimate driving machine. It came with a 5.6-liter V12, included sleek reshaped bumpers and an improved suspension with newly-developed technological electronic enhancements such as stability control.

No matter what company you keep, this car is dressed to impress with a 550-horsepower V8. If you don’t feel like smoking the tires all day, there is an active differential system that modulates power to the wheels to maximize grip.

Desert Dingo Racing is one of the few teams crazy enough to try and take on the legendary Baja 1000 off-road race in a class eleven Volkswagen Beetle. The terrain of the Baja 1000 is well suited to 1,000 horsepower trophy trucks with two-feet of suspension travel. For a stock Beetle, that is already more than 40 years old, it’s sheer torture on both man and machine. The Dingo’s have yet to win the race, in fact they have yet to finish, but the #1107 is ready to show you what it’s got and win your heart.

The Type-R name has become legendary for a good reason: there have been few front-wheel drive cars so rewarding to drive as the Acura Integra Type-R. Then there’s the sound of the highly-developed 1.8-liter four — when the VTEC kicks in on the motor’s way up to a stratospheric 8,600 RPM redline, it’s clear this coupe means business.

Chris Hare
A True Tech Geek at Heart, I Started my life of being a Tech Geek at the age of 5 with the BBC Micro. Went on through most of Nintendo stuff and now a Xbox and PlayStation fan. I also leaked the information about the leaked Hotmail passwords story from October 2009 that went World Wide. I Started writing tech articles at the beginning of 2011, most of my articles are about Android phones and Xbox One and PlayStation 4 and other gaming news. When Chris has free time its with the family.
Previous articleLords of the Fallen: Ancient Labyrinth DLC out now
Next articleWhite Night coming to PS4 and Xbox One next week