Fundamentally Warhammer Quest is a classic turn based strategy game. You take your band of heroes into a dungeon to kill it’s inhabitants and steal their stuff. Visiting one of Warhammer Quest’s villages will reveal at least one quest for your team to take part in when you return to the world map. To move things along the story is told through a series of text boxes. They’re well written but it can make quests feel a little dry when the big conclusion is a box of text you get to read. 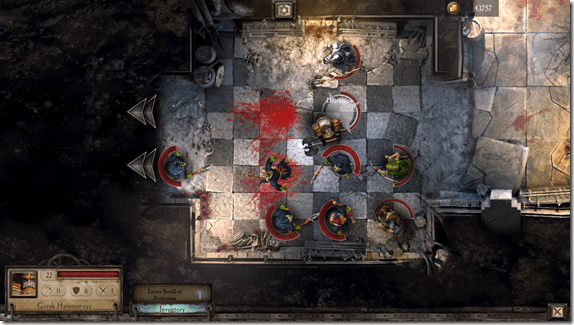 Dungeons are randomly generated but they’re nothing special. There are clear blocks that form simple shapes that fit together nicely. No matter what the quest is or what’s happening in the ‘story’ the gameplay never deviates from its path. Walk through the dungeon to reveal the area and kill everything in sight. There’s absolutely no variation in objectives other than the distinctly missable text boxes.

Unfortunately this is where the fact that Warhammer Quest was originally from iOS starts to become a problem. Sure when you play a mobile game you want 10-15 minutes of uncomplicated fun. A complex story would probably just ruin the pace. But it doesn’t translate to the ‘big screen’. On a mobile you would expect to play for only a short time and keep returning for a similar burst of game time. You expect to be able to sit and play a full PC game for at least 30 minutes to an hour. Warhammer Quest makes it very difficult to stay interested for that length of time given that not a lot changes.

Finding loot is one of the only ways I felt the need to return to Warhammer Quest. Whichever of the four characters you choose to play with will have loads of options for equipment and loot drops are frequent enough that it’s never long before you find yourself reequipping a character. But the loot isn’t particularly imaginative. More often the not it’s a simple case of replacing items for superior ones rather than any complicated compromises or choices.

The combat is another casualty of Warhammer Quest’s mobile origins. There is nothing more to do than move near an enemy and click on them to attack it. If you have a character capable of ranged attack they obviously will have more choice but it still basically comes down to tapping a creature and seeing if you killed it or not. The only sense of strategy involved is making sure everyone in the team gets an attack which is really a case of making sure you move characters with common sense rather than any strategy.

Yet again this gameplay would work if I were tapping away on a mobile screen but on my PC with a mouse and keyboard it’s just too simple. Click to move, reveal map, click to move, attack enemy. That’s really it. There are a few abilities and spells to concern yourself with but that’s basically just one more click. There’s no cover or defence to concern yourself with. There’s no overwatch or strategic positioning to think about. You move and hit the enemy and hopefully it dies first. The miss rate is unbelievable and more often than not you’ll spend your time swinging and missing; until you finally hit something and kill it. 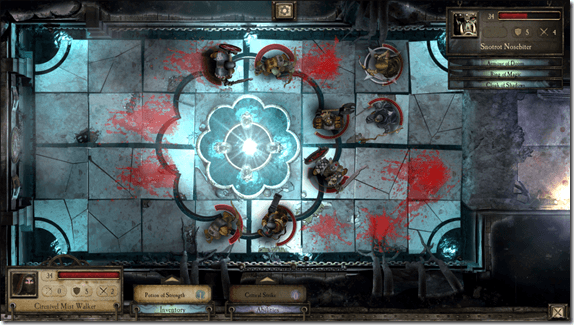 Warhammer Quest’s worst sin however has to be the visuals. They haven’t been altered from the mobile version at all. And it shows. At best there is a slight blurring around everything that makes it look like you’ve zoomed in on a low resolution video. At best you have huge patches of unused black space around the edges. Top down strategy games usually don’t focus on high fidelity but Warhammer Quest literally hasn’t been improved from the mobile version to the PC.

One of the most glaring occurrences of this is when you visit a town and a pop-up book opens showing a rough 3D map of the place. It’s a nice way to represent it without rendering an entire town pointlessly but viewing on the PC just makes it look stretched. Which is exactly what it is. It’s pixelated, blurry and just horrible to look at.

But just when you think it can’t get any worse there’s just one more thing that Warhammer Quest has brought with it from the mobile platform – premium currency. I’m not actually so offended by premium currency as a concept these days and some of my favourite games have been free-to-play with currency. But to pay for a game as badly ported as this and then find a premium currency system is just an insult. 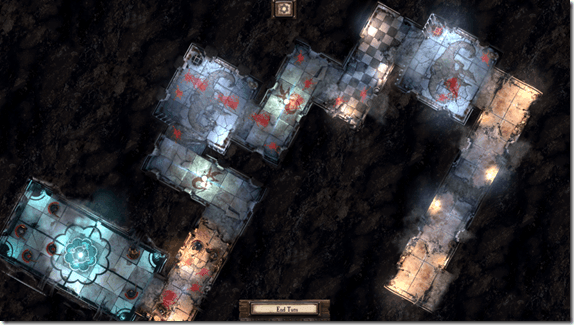 Unfortunately there’s nothing complicated to Warhammer Quest. You play for 20 minutes and probably get bored and turn it off. Which really is to the games credit considering it’s a mobile game. But to port a game successfully from iOS to PC there needs to be at least some changes. Increasing the resolution on videos rather than just stretching them is one. The same goes for the environments too, stretching low resolution assets is never a good move.

Visuals aside there just isn’t enough complexity in Warhammer Quest to compete with other turn based strategy titles on the PC. That same complexity that would be undesirable in a mobile game is so important to a PC game. Space Hulk offers more strategy in a Warhammer setting and if you’re just looking for turn based strategy there are loads of better games on Steam for this price; and almost all of them don’t have premium currency. If you want Warhammer Quest get it for iOS where it belongs, as a PC game it’s just not worth playing.

phillvine
Phill has been the director of a small IT repair business since 2011 which he runs alongside studying for his degree in Information and Communication Technologies at the Open University. Video games are his real passion and they take up more of his time than he'd like to admit.
Previous articleThe Escapists tries to Escape on Xbox One next month
Next articleHavoc DLC for COD: Advanced Warfare on the 27th Jan