To celebrate the release of The Two Faces of January which is available now on DVD, Blu-ray and VOD, we had an exciting competition for you. We were offering three lucky winners the chance to win the film on Blu-ray and here are the winners. 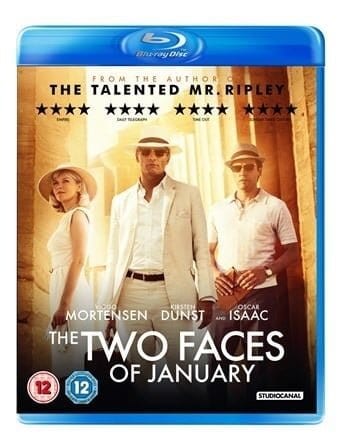 The Two Faces Of January is a suspense thriller starring Academy Award nominee Viggo Mortensen (The Lord Of The Rings, The Road, A History Of Violence), Golden Globe nominee and Cannes Best Actress winner Kirsten Dunst (Spider-Man, Melancholia, Marie-Antoinette) and Oscar Isaac (Drive, The Bourne Legacy, Inside Llewyn Davis). It is based on the novel of the same name by Patricia Highsmith (‘The Talented Mr. Ripley’) and adapted by Academy Award nominee Hossein Amini (Drive, Snow White And The Huntsman).

It’s 1962. A glamorous American couple, the charismatic Chester MacFarland (Viggo Mortensen) and his alluring younger wife Collette (Kirsten Dunst), are in Athens during a European vacation. While sightseeing at the Acropolis they encounter Rydal (Oscar Isaac), a young, Greek-speaking American who is working as a tour guide. Drawn to Colette’s beauty and impressed by Chester’s wealth and sophistication, Rydal gladly accepts their invitation to dinner. However, all is not as it seems with the MacFarlands, Chester’s affable exterior hides darker secrets. As events take a sinister turn, Rydal finds himself compromised and entangled as an accomplice to a crime committed by Chester. Their journey takes them from Greece to Turkey, and to a dramatic finale played out in the back alleys of Istanbul’s Grand Bazaar.

We had three copies of The Two Faces of January on Blu-ray to give away!

The Two Faces of January is available on Blu-ray, DVD and VOD now.

Andrew Edneyhttps://moviesgamesandtech.com
I am the owner and editor of this site. I have been interested in gadgets and tech since I was a little kid. I have also written a number of books on various tech subjects. I also blog for The Huffington Post and for FHM. And I am honoured to be a Microsoft MVP since January 2008 - again this year as an Xbox MVP.
Previous articleShadow Warriors lands on PS4 and Xbox One
Next article300 Rise of an Empire – An Interview with Mark Twight