Linksys has added a gigabit switch to the WRT product line.  Intended to stack with a WRT-1900 AC router, this 8 port switch looks to be interesting.  Read on for details! 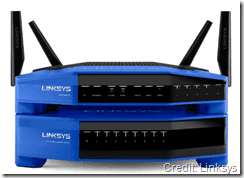 Linksys has added a gigabit switch to the WRT product line.  Intended to stack with a WRT-1900 AC router, this 8 port switch looks to be interesting. Here is the press release:

LINKSYS 8-PORT SWITCH, FIRST IN THE LINE OF NETWORKING PERIPHERALS

MADE TO COMPLIMENT THE AWARD WINNING WRT ROUTER

Expands the Number of Wired Connections on a Home Network

“This 8-Port Switch was designed and developed for our loyal WRT router fans. As with the legacy WRT router line, we had stackable solutions to help make it easier to connect other products, save space on the desktop all while building a tower of networking solutions that were all in one place and simple to access, said, Mike Chen, Linksys vice president of product management.  “Our introduction of the WRT 8-port switch is our first in a line-up of networking peripherals that will stack below our flagship WRT router to enhance the performance or use of a home network.”

At a Glance Features:

From surfing the Web to creating a robust local area network, you’ll experience exceptionally fast wired speeds and versatile connectivity with our SE4008 WRT Switch. The switch fits below the WRT1900AC router (sold separately), while also compatible with other routers, to create a powerful and space-efficient WRT network.

Easily connect a gaming console, an IP camera, an external hard drive, or other devices to a home or office network and take advantage of ultra-fast wired Internet speeds. The switch is outfitted with eight Gigabit Ethernet ports that deliver speeds of up to 1,000 Mbps—up to 10 times faster than a traditional Fast Ethernet (10/100) connection. Quality of Service (QoS) technology helps prioritize video and audio applications for better streaming.

Perfect With The WRT1900AC Router

With its sleek lines and designed to physically stack below the WRT1900AC, the SE4008 is a perfect match for the iconic WRT1900AC router (sold separately)–allowing users to expand their local area network and connect devices to the Internet without taking up additional shelf space. The switch is also compatible with most other Wi-Fi routers.

To maximize energy efficiency and help you save on your electric bills, the SE4008 automatically enters into power-saving mode when it detects that a port is not in use or a connected device is turned off.

The SE4008 8-Port Gigabit Switch is available today for an MSRP of $69.99 at major retail and online resellers as well as the Linksys store.

Note that US MSRP is $69.99 and is available right now.  I have a review unit; this is a nice switch.  I’ll be publishing a review soon so stay tuned!

Jim McCarthy
My tech interests include WHS, media streaming, and gaming, among others!
Previous articleWatch the Story Trailer for Assassin’s Creed Rogue
Next articleFirst Details of WWE2K15 Showcase Season Pass

While driving is an experience that many people enjoy and do every day, it’s also very dangerous and many people are caught in accidents every day
Digital Home

To usher in Star Wars Day today, Nanoleaf has created unique Yoda and lightsaber designs using its popular Shapes and Canvas ranges of customisable smart light panels and we have some to giveaway.