It’s finally time to catch the fever. Since Train Fever has a minimalist design I thought I’d just jump straight in and get started. Starting up a new game brings up the option to play two simple tutorials. The first is for setting up a simple bus route and the other for a train line. Everything went smoothly but after I’d finished both sections of the tutorial I realized I had no money left after my tracks had been automatically built using bridges and tunnels. Not too much of a problem, I merely restarted having learned my lesson and I appreciated the freedom to make mistakes but perhaps such freedom is out of place during a tutorial.

So I started my new map and set about deciding which two towns to connect. I set up my bus routes easily. Each town has a limited amount of road already laid out for you to work with. Placing a bus stop on a section of road creates a point for citizens to wait for a bus to arrive. And then you create a route using however many of these stops you want and assign a vehicle to it. The vehicle then begins work and eventually you should earn money from the route. 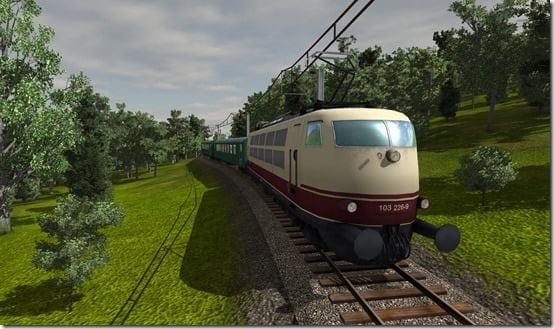 There was a certain satisfaction in deciding on how many vehicles to assign for efficiency and cost effectiveness. And making an efficient route isn’t quite as simple as it first appears. Things like placing stops on the correct side of the road can make a significant difference in how long it takes for your busses to complete their route. But ultimately once a route is set up there’s very little for you to do but build new ones.

For train lines it’s a little more complicated. Not because there’s any difficulty, of course you’re route options are rather limited but that should make things easier. And it does once you’ve built the track but the building itself can be a torturous experience at times. Countless times I would drag the track tool only to see it was unavailable due to ‘Terrain alignment’. That’s all the so called help you get. There’s no indication on how to make it right and considering sometimes a bridge or tunnel will be created when needed it’s rather confusing when that doesn’t happen. So many times I found myself dragging the endpoint of my track around like a fool to try and find a valid spot with no success. I also found it frustrating that track would be cut into the scenery at times when it could just as easily have been placed on the surface level.

And creating a long length of track is even worse. To select the correct track to extend you have to have the camera fairly close. Not zoomed right in but still enough that you’re view of the map is limited. And you are unable to move the camera with track selected. So you’ll have to build it up in smaller sections, which quickly becomes a pain.

But the UI is slick even if it’s only because there isn’t much of it. There are very few elements at all and each of them has a purpose. Clicking on an element often opens up a widow in game that can be moved and closed like a window on an operating system. So Train Fever gets a very raw feel. Everything has its place and nothing is there unnecessarily or just to make things look better. Having said that I can’t help but feel this is partly because Train Fever has little more to offer. 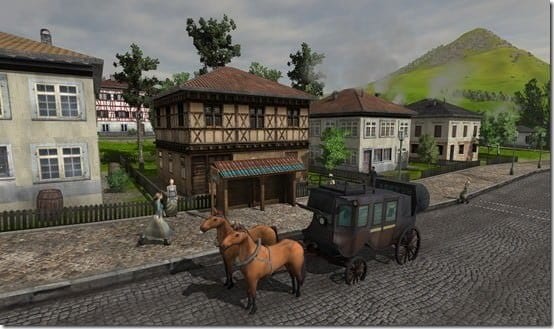 The level of detail is nothing short of amazing. Each coble that makes up a street feels as though someone has carefully placed it. Each citizen has a ‘thought process’ in deciding how long they are willing to wait for their transport or how far they will walk. There’s so much detail embedded in Train Fever but so much of it seems misdirected. For example it’s great that everything looks so good but I’d far rather be able to zoom out with more than around 1 frame every 5 seconds. The map is impressively huge but therefore I need to be able to scroll the map while I have the track building tool selected.

Train Fever has a lot in common with Banished. Banished had no objectives or rewards other than to survive. It was difficult and its lack of accessibility meant it was reserved for those who loved city building. Train Fever is largely the same. Once you’ve built your basic infrastructure you expand and grow. And as time passes you’re transport will become more modern. And the changes in era are impressive as your trains, busses, buildings and technologies become closer to the year 2000. Train Fever’s coverage of time is truly impressive.

But unfortunately were time in-between growth on Banished was spent balancing consumables and keeping people healthy Train Fever offers you very little. You build a new line of either busses or trains and eventually it makes money. Then when you have enough you can build another. I’m glad Train Fever doesn’t lose focus and try to be a full city builder and I love the detail and effort that’s clearly gone into it. But without resource management or people complaining about needing transport or something in between it can quickly become boring. When Banished kept me hooked by making me constantly check supply and demand, population growth and consumption Train Fever allows me to do nothing. 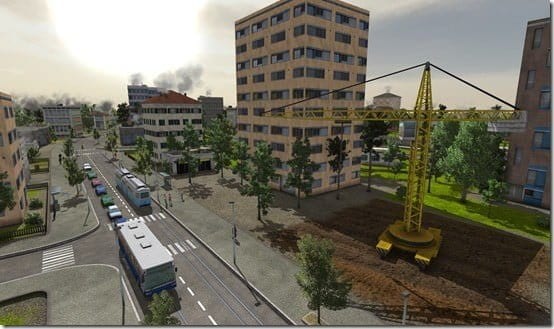 There’s certainly fun to be had in Train Fever and it’s well designed at least as far as a transport manager goes. It looks great and the attention to detail is incredible. But without objectives Train Fever needs to provide us with something to do. There simply isn’t enough to keep even some hardcore fans interested for too long. On top of that the build tools can be awkward or temperamental and the optimization is far from perfect. Train Fever can be good fun for a little while but anyone other than the hardcore will struggle to find much entertainment value in it after a couple of hours. Nevertheless it’s an incredibly impressive game especially for such a small developer. With a few bits of extra content or maybe some custom scenarios Train Fever could be a great game but as it stands it’s ‘only’ good.

phillvine
Phill has been the director of a small IT repair business since 2011 which he runs alongside studying for his degree in Information and Communication Technologies at the Open University. Video games are his real passion and they take up more of his time than he'd like to admit.
Previous articleInternational Talk Like a Pirate Day from Skylanders
Next articleSkylanders Trap Team – An exclusive interview with Jeff Poffenbarger from Toys For Bob