Well Bungie decided not to carry over progress from the Beta. A good choice for game progression but it does mean that this is the third time I’ve climbed to level 12. And I don’t care at all. I just needed to get stuck in and explore worlds, level up and find loot with my fellow guardians. 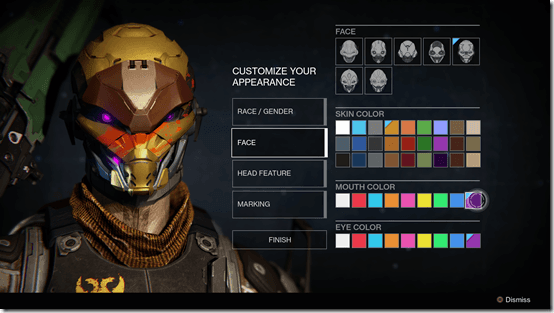 When you start you’ll have to choose between three classes, The Titan, The Warlock and the Hunter. They all feel completely different and they all come with an alternate class to level up once you reach level 15. Your characters race is purely cosmetic and will only be seen in The Tower (Destiny’s social hub) anyway so don’t worry too much. It’s not easy to say which class is for who but Destiny doesn’t limit you. My first character is a Hunter but I like to unload all hell into something, usually with a shotgun, and then run off and get my health back. It works well, so long as you know your limits. But the great thing is I never felt even remotely limited by my class. Apart from the fact there’s another subclass I can switch to whenever I want, I didn’t feel I had to use a sniper just because I’m a Hunter. In fact I rarely did.

Once you’ve sorted your character out a good way to start is definitely with the campaign, although in truth they’re really just missions to complete that are limited by level and not order. There’s a decent sci-fi story that leaves plenty of room for expansion down the line. The few characters you meet are only met briefly but seem like they may have a bigger part to play in the future. Progression hits the sweet spot, nothing is handed to you for free but there’s always something to look forward to. Although during my campaign experience, which I mainly played alone,  there were a couple of times when I thought the action was becoming a bit formulaic. Turn up, follow a marker, kill something, follow a marker, rinse, repeat. But that’s mainly because it’s difficult to remember that Destiny is really an MMO and is definitely not targeting the single player experience. But the campaign is so close to standing up on its own without the other features that its easy to forget.

My main gripe is that without my friends online I played alone. For those who haven’t played the Alpha or the Beta when you proceed to the start of a mission you still play in the open world. Other Guardians are going about there business but they’re not directly in your fireteam. When you cross an invisible threshold respawning becomes limited and the mission begins. At this point only your fireteam are present. So three guardians all walk into a mission alone (this isn’t a bad joke), with a public fireteam setting and play three separate missions. For a game so focused on co-op and team play this is just madness. Worse still there’s no way to see where the boundaries are and once you’ve crossed it it’s too late. I’m not saying I want a big ugly menu to come up every 10 seconds but perhaps an option that allows automatically putting similar guardians that are right next to each other and clearly on the same mission into a fireteam together would be good. The amount of times I’ve crossed that threshold alone as others do the same thing is just crazy.

However, on one occasion someone actually joined me! They must have known where the super secret line was. And we proceeded with the mission efficiently communicating silently in that way only gamers can. It was actually my penultimate mission and my friend stayed with me after the mission as I continued into Destiny’s finale. I don’t know if he/she had seen it before but we explored the areas together and completed our mission. We shared a dance and parted ways. I only wish Destiny had helped make these random encounters happen more often. It makes it easy to join a friend, or even someone with a public team but the invisible threshold makes it almost impossible to set up a fireteam with random players. (Just as a note, the PS4 doesn’t recognize people in your ‘players met’ list so don’t rely on that like I did.) 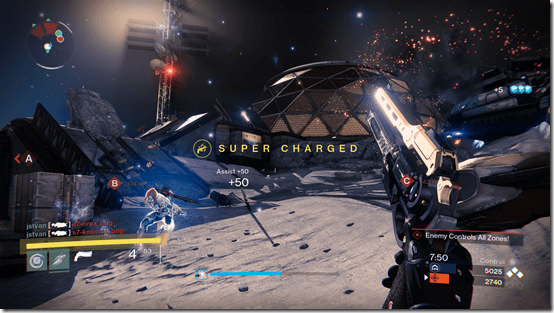 Your environment plays a big part in playing Destiny. Knowing if you can make a jump might be the difference between life or death. Escape or landing right in the middle of a horde of very angry ‘men’. If you trap yourself it’s particularly bad news and often the AI will take advantage if it can. It likes to flank. And it doesn’t always mindlessly run into fire; although it does it a lot. If there’s only one or two enemies left alive the enemy tends to hide and make you come looking. More often than not the AI comes looking for a fight but it can be clever when it needs to be.

Which leads me nicely onto the topic of bosses. Bungie weren’t afraid of making a big aggressive sponge to soak up hundreds of rounds, crates of grenades, half a dozen rockets and still come back for more. And that’s not an exaggeration. Bosses are an actual challenge. Fights often form a pattern of shooting, dodging attacks and shooting again but they’re good fun especially with friends. Everybody likes a boss they can really get stuck into and Destiny will not disappoint.

The bosses are particularly prominent In Strike missions which form Destiny’s repeatable co-op missions. Those who played the Alpha and/or Beta will understand how tough these missions can be. And when you hit level 18 there’s another set of extra difficult missions for you. That’s my weekend sorted.

Or there’s the crucible, Destiny’s PvP offering. There’s a decent selection of game modes to keep you interested and the gameplay is exciting and fun. Apart from one mode, everybody plays with the same stats and equipment. You can select your weapons but your armour will be as effective as your opponents and your auto rifle the same power as theirs. And of course if you really want to test your skill and equipment you can play with your actual character, level and all. But so will your foes. It’s nice that it’s included but I can see this very quickly becoming reserved exclusively for the elite and people with more time than you. Time will tell. But at least the options there. 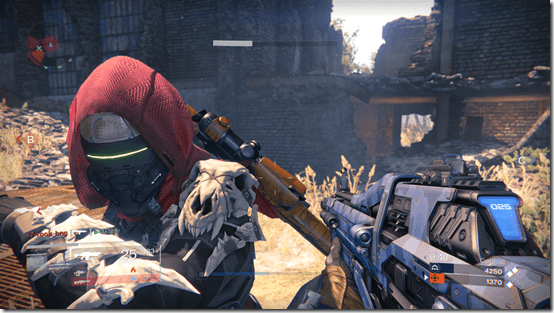 And of course everything you do will earn you something. Your character has a Vanguard level and a Crucible level. The Vanguard represents PvE and Crucible PvP. This level acts as a reputation and at higher levels will unlock exclusive gear that you will want. Completing missions in the Crucible earns you crucible reputation and completing strike missions earns you Vanguard reputation. Each one also has a currency which is earned in the same missions, with a limit of 100 a week for each. You can get a lot done with 100 Vanguard/Crucible marks and earning that many will probably take a week anyway so that shouldn’t be a problem for anyone. 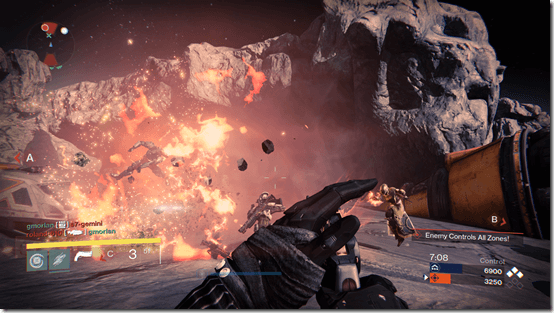 And once your finished with all that and you’ve reached level 20 the game really begins. Although 20 is the cap for levelling up conventionally there are ‘light levels’ to be earned after this. By equipping various rare armours and equipment you can level up past 20. Plus there’s a simple but clever system were your XP gets converted to ‘light motes’ which act as currency for some really nice items so earning XP after reaching the cap isn’t a problem. There’s loads to do after 20 and that’s after a 40 hour playthrough to get to 20 with one of the six classes available. Destiny certainly has enough content for MMO, RPG and FPS fans alike.

Presentation is truly exceptional. Destiny is a marvel to look at and the original soundtrack is somehow both reverent and triumphant. It looks beautiful all the time. Nothing feels rushed or uncared for. Seeing is believing. And if you’ve got a good headset or sound system Destiny definitely benefits from high volume. Auto rifles are tinny and sci-fi-ey and the Heavy Machine Guns (not sure why they’re not called LMG’s) are really chunky.

In short Destiny is a marvel. It does almost everything right apart from a few minor niggles. But far more importantly it’s something new that finally pushes the increasingly stale MMO genre forward. It’s great looking, great sounding, endless fun filled with both competitive or cooperative levelling and looting. There’s more content than you could ask for and I’m quite happy doing the same things over and over in Destiny, because it’s just fun. Destiny has become legend before we even got chance.

phillvine
Phill has been the director of a small IT repair business since 2011 which he runs alongside studying for his degree in Information and Communication Technologies at the Open University. Video games are his real passion and they take up more of his time than he'd like to admit.
Previous articlePAC-MAN and the Ghostly Adventures 2 Coming Soon ..
Next articleSpider-man Unlimited for mobile is here

So PlayStation has held another State of...
Read more
Contests