This is going to be a difficult review. Blue Estate is an on the rails shooter based on the graphic novels of the same name. As with any rail shooter your character will be guided automatically from area to area as you blast away countless enemies. Back in the old days that would probably be done with a Light Gun. In Blue Estate it’s done with the PS4’s Sixaxis. There are several slight problems that sour Blue Estate’s otherwise mediocre gameplay. 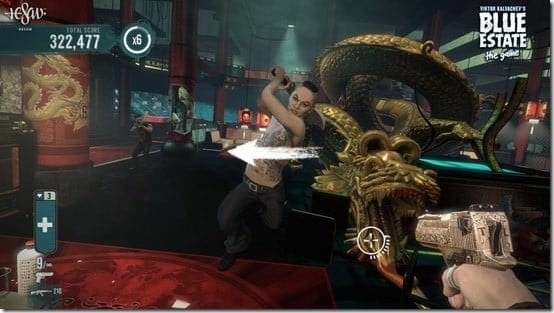 We’ve seen quite a few implementations of the Sixaxis over the last generation and more often than not it was merely an afterthought that was forced into a game somewhere. On the rare occasion it was used more fully however I never actually felt that the Sixaxis tech let me down. Regardless of the fact I would probably just rather not use it, the Sixaxis is quite a capable bit of tech.

Well in Blue Estate it just simply doesn’t work well enough. I can’t help but feel the problems lie in Blue Estate’s design but whatever the cause it doesn’t matter. When me and Sam from here at Connected Digital World ventured out into the first level in co-op the sight that unfolded was, I imagine, both ludicrous and hilarious. Over time your cursor will become completely out of sync with your pad to the point were you’re having to figure out which direction is now up, down, left or right. I ended up with my pad completely backwards and Sam with his upside down.

Truth be told we eventually found the centre button (up on d-pad or ‘L1’) which returns your crosshair to relative normality so you can carry on blasting your targets. At the absolute centre of this game is your ability to aim at targets. In fact it’s all you do because it’s a rail shooter. Having to constantly wait and get shot at repeatedly while you find your cursor is just ridiculous. I curse anybody that actually saw how this game works and thought it was OK. After another go we both quickly got intensely sick of having to fix the game for the developer as we played and quit in frustration. I pushed on with solo to get this review done but that is the only reason I had to play Blue Estate.

You will be bombarded with constant humour and stereotypes that we could all live without. It’s not particularly clever and at times it’s just patronizing. For instance Blue Estate seems to think that women are strippers. End of story. I’ve got nothing against ‘exotic dancers’ but the tasteless assumption that all women are just sex objects is not good or wanted in any way. The jokes are something that even a 10 year old would cringe at. It’s not charming at all, although it seems to think it is for some reason, and it certainly isn’t clever. 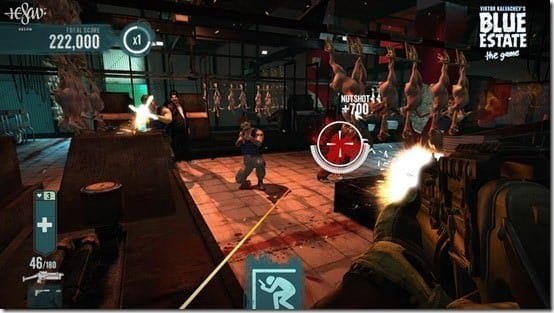 Blue Estate is just a mess. Rail shooters aren’t exactly the most inspiring platform to begin with but when that platform is entirely comprised of jokes that range from bad to almost offensive even a 20 year old arcade game would look appealing. On top of that the gameplay isn’t even entertaining. The auto aim is seriously strong and it seems it needs to be just so the game functions at all. But I’ve never seen the Sixaxis perform so poorly and I can’t escape the feeling it’s Blue Estate at fault. You spend just as much time having to centre your crosshair as you do shooting. This is a game to avoid at all costs. I couldn’t recommend it to anyone under any circumstance.

phillvine
Phill has been the director of a small IT repair business since 2011 which he runs alongside studying for his degree in Information and Communication Technologies at the Open University. Video games are his real passion and they take up more of his time than he'd like to admit.
Previous articleDisney Infinity 2.0: Guardians of the Galaxy Play Set
Next articleHumble announces the Square Enix Bundle

If you are a fan of Top Gun or fast jets, then you might want to take a look at the new Tomcat RIO book by Dave "Bio" Baranek.
Read more
Gaming