The Winners of our HE WHO DARES on Blu-Ray Giveaway

High-octane British action thriller HE WHO DARES, was released on 7th April, 2014 and we had 3 copies on Blu-Ray to give away – here are the winners. 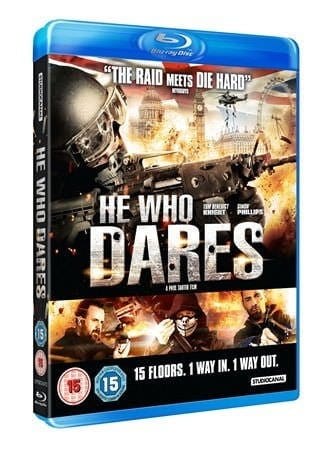 Directed by Paul Tanter (The Rise And Fall Of The White Collar Hooligan) HE WHO DARES is the tense and brutal tale of six SAS soldiers called in to infiltrate a multi-storey building taken over by a gang of ruthless terrorists.

With the terrorists barricaded deep within the building, and holding the Prime Minister’s daughter hostage, the elite team of SAS troops are left with only one way in and one way out. With the odds of coming back out of the building alive stacked against them, their only option is to take the fifteen storey building one floor at a time in the hope of reaching the hostages before it’s too late.

Starring Tom Benedict Knight (Kick Ass-2), Ben Lloyd-Holmes (Skyfall), Simon Phillips (The Fall of the Essex Boys) and martial arts bombshell Zara Phythian, HE WHO DARES is an explosive, action-packed thriller that keeps the tension on a knife edge.

HE WHO DARES is available now on DVD, Blu-ray and EST.

Andrew Edneyhttps://moviesgamesandtech.com
I am the owner and editor of this site. I have been interested in gadgets and tech since I was a little kid. I have also written a number of books on various tech subjects. I also blog for The Huffington Post and for FHM. And I am honoured to be a Microsoft MVP since January 2008 - again this year as an Xbox MVP.
Previous articleUbisoft Partners with Coeur de Pirate for Child of Light
Next articleTurtle Beach Announces New PS4 Headset at Pax East