Back in January we told you about StarTech’s new Thunderbolt laptop docking station – well now it’s time for our review. 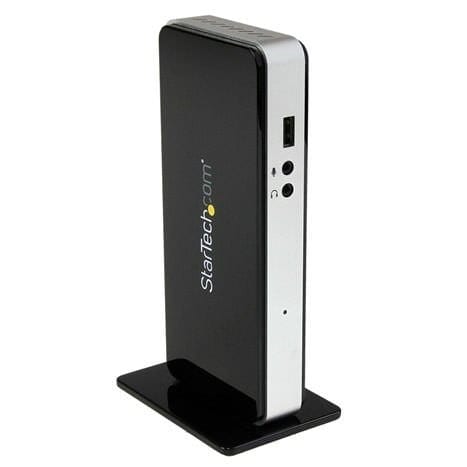 The Thunderbolt Docking Station gives you a single connection point to your home / office workstation, for a flexible setup with formidable speed. Adding Thunderbolt and HDMI video outputs, Gigabit Ethernet, a USB 3.0 hub and 3.5mm audio ports to your Thunderbolt-equipped laptop has never been easier.

Founded in 1985 by Paul Seed and Ken Kalopsis, StarTech.com is an ISO 9001 Registered manufacturer of hard-to-find connectivity parts. Since its inception, our company has been dedicated to making IT professionals jobs easier by helping them identify, find and get the connectivity parts they need to enable their solutions.

The majority of the ports are on the rear of the dock (these include 2 USB 3.0 ports, two Thunderbolt ports, HDMI, Gigabit Ethernet and of course the power connector. 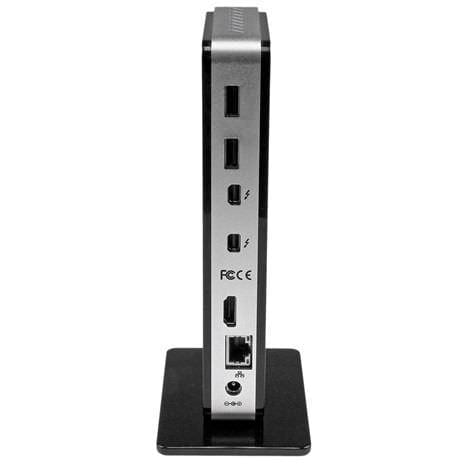 The front of the device has a single USB 3.0 port, and a 3.5mm microphone and headphone socket. There is also a power light on the front which illuminates when the dock is connected to your Mac.

The first thing I noticed when I opened the box is that the actually contained a Thunderbolt cable. So often these days you get a Thunderbolt device only to find that you also need to go and buy a cable. Thankfully StarTech put a 1m cable in the box for you.

The Docking Station is quite small and needs to be placed on the stand and secured with two screws – this only takes a moment and you are ready to go.

Plug in the power adaptor and connect the Thunderbolt cable to the dock and then to either your Mac or PC with a Thunderbolt port and the device comes to life – you can see it’s all working by the light on the front of the device. You don’t need to install any drivers as this is taken care of for you automatically.

One thing I really liked was the ability to use both a Thunderbolt display, and an HDMI display at the same time. In fact, if you count the Mac’s display as well you can have three displays running! If your monitor has a mini-display port then you can use that too, however the HDMI port then gets disabled, so bear that in mind depending on your multiple display needs.

Overall I really liked the Thunderbolt Dock – it had everything I needed to expand my Mac’s connectors.

The only thing that might put people off is the price – it’s not cheap, but then you are getting a lot of ports for your money, plus you do get a Thunderbolt cable in the box. And if you have a Mac you know that Apple doesn’t make docking stations so this could be a very wise purchase if you want to expand your Mac!

Andrew Edneyhttps://moviesgamesandtech.com
I am the owner and editor of this site. I have been interested in gadgets and tech since I was a little kid. I have also written a number of books on various tech subjects. I also blog for The Huffington Post and for FHM. And I am honoured to be a Microsoft MVP since January 2008 - again this year as an Xbox MVP.
Previous articleExclusive Troy Baker inFAMOUS Second Son Interview
Next articleNew content for BFI Player in March