Win The Fifth Estate on Blu-ray

The Fifth Estate has just been released on Blu-ray and DVD, we have a great new competition for you to win a copy on Blu-ray. 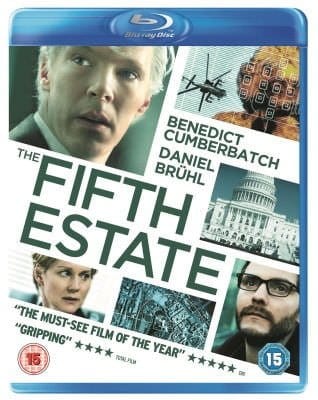 BAFTA award-winner BENEDICT CUMBERBATCH gives an outstanding performance in the adrenalin-fuelled dramatic thriller, THE FIFTH ESTATE. This powerful exposé based on the real-life events of the notorious WikiLeaks.

Driven to expose corporate crimes and government secrets no matter what the cost, activist Julian Assange (Cumberbatch) and computer hacker Daniel Domscheit-Berg (Bruhl) team up to become the underground watchdogs of the privileged and powerful. As their Wikileaks organisation starts to gather support and influence across the globe so the stakes are raised; pitching them into conflict with the US intelligence agencies and putting the lives of thousands in danger.

The home entertainment release takes you further inside the conspiracies with the DVD featuring an additional featurette ‘The Submission Platform’ and the Blu-ray packed with even more behind-the-scenes action with ‘In-Camera Graphics’ and ‘Scoring Secrets’.

We have teamed up with Entertainment One to offer three lucky winners The Fifth Estate on Blu-ray.

So all you have to do to win one of the three The Fifth Estate Blu-rays is to click on the Contact Us link here or at the top of the page and tell us which fictional detective Benedict Cumberbatch plays on BBC One – simple!

Just retweet the message below, and make sure you are following @aedney on Twitter:

Follow us & RT for a chance to #win The Fifth Estate with #BenedictCumberbatch http://t.co/aNPxVwiBv9

Usual contest rules apply, and the winners will be selected at random. This contest is open only to those in the UK – sorry! You can enter as many times you as you like, but only one entry per day will be counted.

The Fifth Estate is available now on DVD and Blu-ray from Entertainment One.

Andrew Edneyhttps://moviesgamesandtech.com
I am the owner and editor of this site. I have been interested in gadgets and tech since I was a little kid. I have also written a number of books on various tech subjects. I also blog for The Huffington Post and for FHM. And I am honoured to be a Microsoft MVP since January 2008 - again this year as an Xbox MVP.
Previous articleThe Order 1886 Trailer Out today at 2pm GMT
Next articleLEGO Marvel Super Heroes: Universe in Peril now out for the DS