I was recently invited by Toshiba to visit Inition, an independent gaming production company to see just what the Encore Windows 8.1 tablet was cable of. 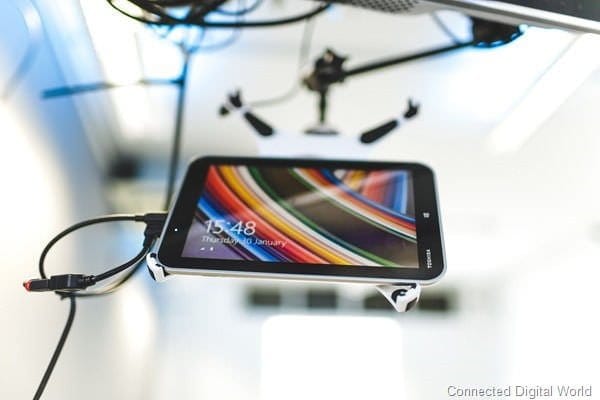 Inition was formed 12 years ago and through a finely-tuned blend of technological and creative capabilities, has established itself at the forefront of the development gaming scene. 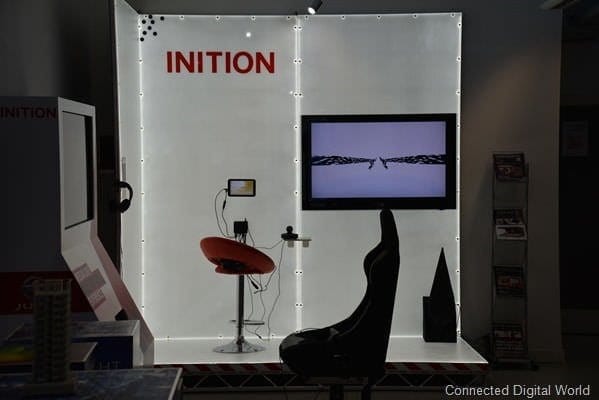 The Windows 8.1 tablet is ideal for consumers and prosumers wanting to move seamlessly between working, playing and sharing on a single device. Its Xbox SmartGlass capability, wide viewing angles and superior screen quality make it ideal for gamers and entertainment junkies alike. 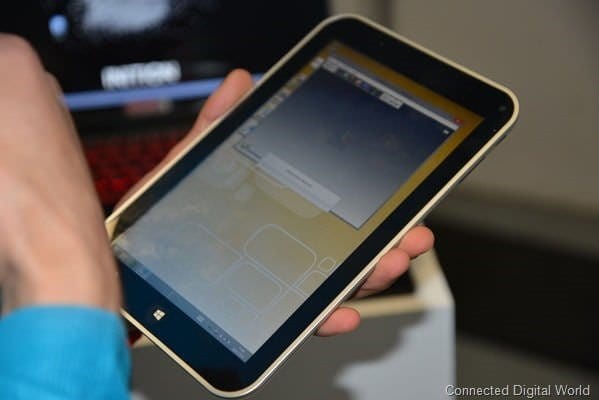 It has an 8-inch HD touchscreen, 32GB of built-in storage, an 8 megapixel camera, an Intel Atom processor, 2GB ram, weighs less than half a kilo and retails for under £250 – yes, you read that correctly £250!

For this part of the afternoon, we were all scanned by a hand-held device. This scanning process took a couple of minutes and involved the device being moved from one side of our faces to the other. Under normal circumstances the process would be a lot more in-depth, ensuring that there were no areas missed during the scan. The scan could also be in colour if required, but for the sake of time, the scan was taken with a single colour (gold), and without hair! 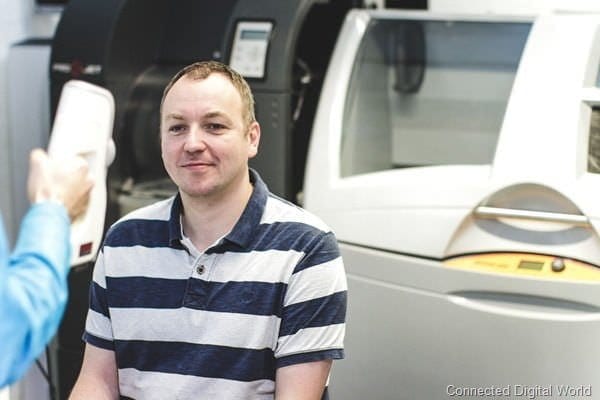 After the scanning was complete, the file was copied over to the Encore tablet, where it would be easily manipulated with the swipe of a finger. 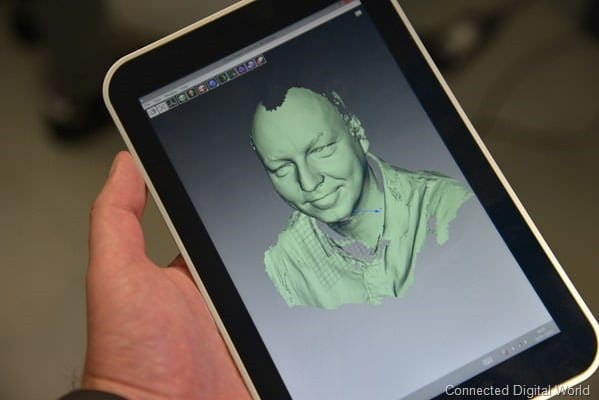 I was surprised just how well the Encore dealt with the scan – and also slightly freaked out by seeing myself as a 3D model!

Inition used the same 3D scanning and modelling technology to create the album cover for Robbie William’s latest album Take The Crown. They then took our scans and created our very own album covers – although I don’t sing as well as Robbie! 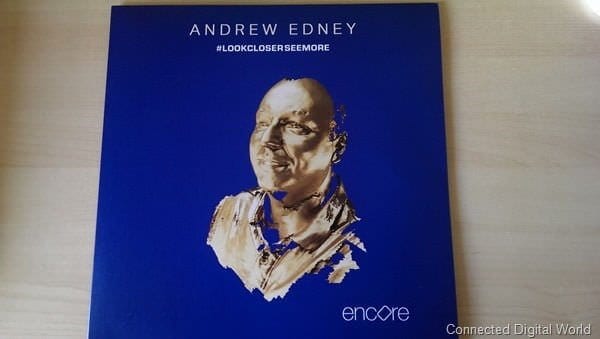 Virtual Reality with the Oculus Rift

Virtual Reality gaming isn’t anything new, however it’s popularity is taking off again with the Oculus Rift, which is a headset based experience that enables you to play games and experience many new and exciting things. 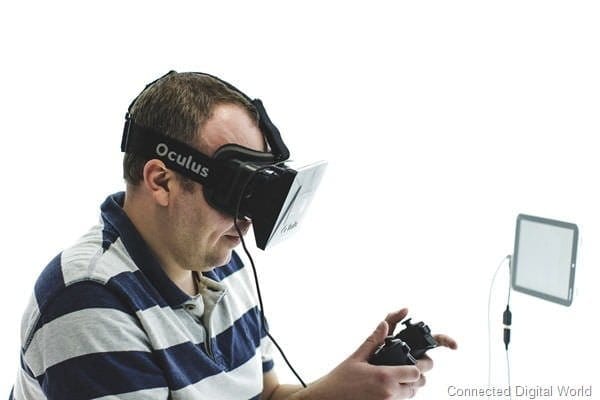 For this particular demonstration, the Oculus Rift device was connected to the Encore tablet, and a Tusan Villa simulation was created. The Encore took care of all of the graphics processing, the connectivity for the Oculus Rift and all of the tracking data used to interpret were you are looking. 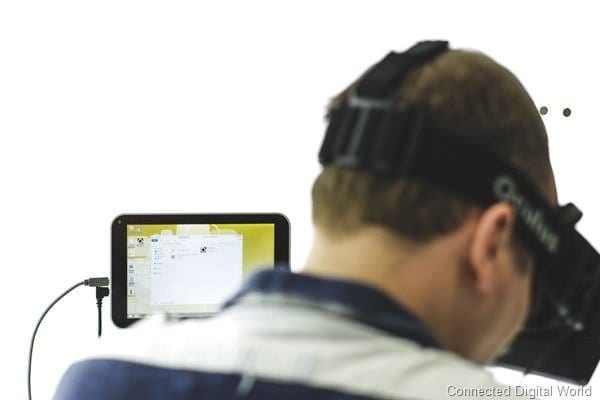 Walking through the Tuscan Villa was a strange experience – one the one hand you know you are sitting on a chair in a studio space, and on the other you really do feel like you are there. I can only imagine what the experience will be like in the coming years when the technology evolves.

As with viewing the 3D model of myself, the Encore really coped well with the VR simulation – in fact, if the Encore hadn’t been sitting there next to me, I am not sure I would have believed it was running it.

For this demonstration, the Encore was connected to a large screen monitor using it’s HDMI out. The USB port was used to control a wireless keyboard and mouse, which we used to drive the BMW M7 card, and the webcam was used to film it all. 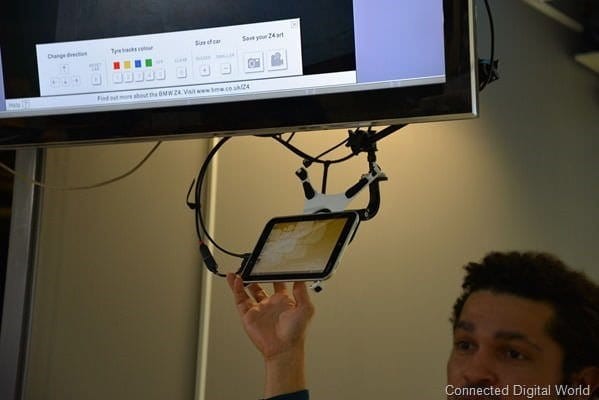 This is the what the Encore’s webcam was filming – an open space. 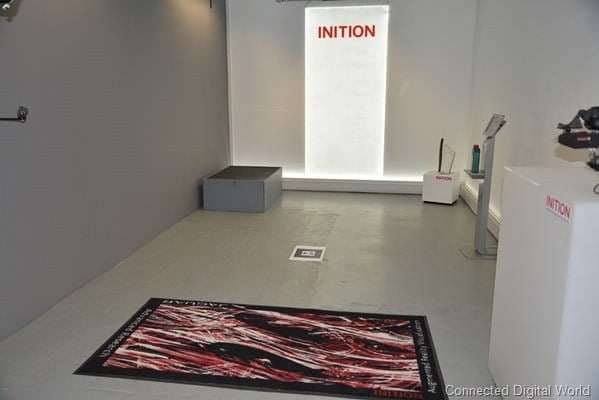 The software then generates the BMW M7 and the keyboard is then used to drive the car around the “screen”. 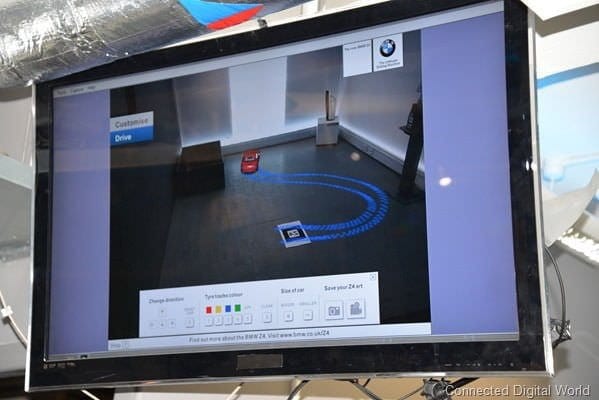 Normally this sort of demonstration would require multiple pieces of kit – a computer, a webcam, and more. All of this (apart from the large screen monitor used to make it easier for us to see the demo) was handled by the Encore.

My biggest take away from the whole experience was that Toshiba Encore was a very powerful device, one that was capable of doing so much more than you would think a small tablet could do – and that is just scratching the surface!

Andrew Edneyhttps://moviesgamesandtech.com
I am the owner and editor of this site. I have been interested in gadgets and tech since I was a little kid. I have also written a number of books on various tech subjects. I also blog for The Huffington Post and for FHM. And I am honoured to be a Microsoft MVP since January 2008 - again this year as an Xbox MVP.
Previous articleHow to build a wireless motion sensor for your Raspberry Pi
Next articleLightning Returns Final Fantasy XIII Exclusive Interview with Yoshinori Kitase and Yuji Abe