I think by now most, if not all, of you will know about Angry Birds. A majority will probably know Angry Birds Star Wars but now we have the chance to play it on console instead of a phone. It seems a little odd, and you might argue unnecessary, to do so but any excuse to get on Angry Birds is a good thing. And it’s all the better when one of your birds is a round Chewbacca themed fuzz ball. 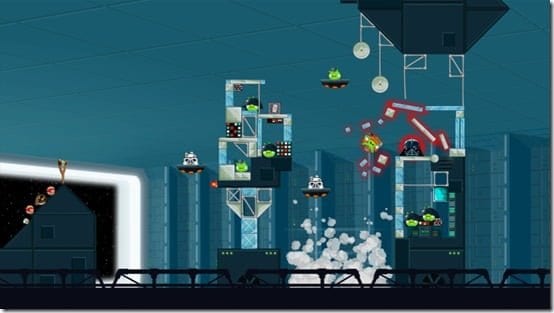 The game itself is the same as the mobile version. Flinging birds at pigs. Nice. The Star Wars themed birds are great and their unique abilities keep the game fresh even after your a long way in. Levels where you must use gravity to slingshot birds around asteroids or where there is no gravity at all really add interesting new levels to the puzzles. More than a few times I got stuck for a while on a level before I managed to move on, but in a good way.

And there are certainly loads of levels and massive replay value if you want to go for the 3 stars or high scores. It’ll take quite a while to even get through the levels yet alone 3 star them all. On top of that there are some nice collectables like “stickers” and artwork to unlock. Just like with the mobile version Angry Birds has enough to keep you coming back for more.

The biggest difference between the mobile and console versions is the lack of a touch screen. I know, I bet you hadn’t noticed had you? The control system is reasonably satisfying although the birds are slung using the left thumbstick and ‘X’. And the Bird’s abilities are also used the same way. On more than a few occasions I would look over to see that I had slung the rest of my Birds into the corner because I had held ‘X’ too long after using an ability. I know it came from a mobile but there are more buttons than just ‘X’ available on a Dualshock. Use them.

The visuals translate over pretty well considering the mobile origins but I can’t help but feel like that HD screen is just a little wasted on Angry Birds. This combined with the slightly over sensitive control system makes Angry Birds feel just a little out of place on the PS3. What I do like is that at any point holding down ‘square’ for a few seconds instantly restarts the level, for when you know you’ve fluffed it. There’s no noticeable load times to restarting this way and it makes experimenting to figure out what strategy you will use painless. Even a short loading screen on a game where repeated restarts are likely is too much so it’s great to see that thought has gone into it. 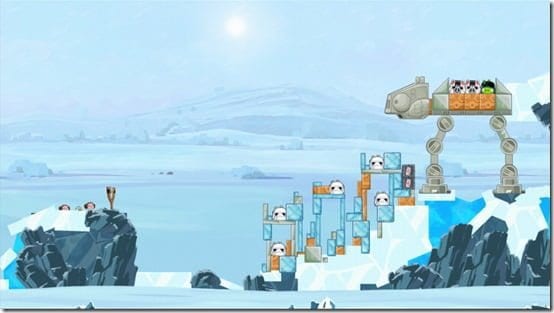 The main problem with Angry Birds Star Wars for consoles is the price. Price isn’t supposed to matter to a game’s review score, but when you can get the same game minus a few bonuses on a  mobile for about a quarter the price it’s difficult to justify. Especially seen as there isn’t really much to be gained from playing Angry Birds on a big TV. In fact the convenience of having Angry Birds in your pocket is one of the main reasons it was so successful. And you can’t take your PS3 with you on toilet breaks. When you can get the same game for less on your mobile it’s difficult to see why Angry Birds Star Wars exists on the PS3.

phillvine
Phill has been the director of a small IT repair business since 2011 which he runs alongside studying for his degree in Information and Communication Technologies at the Open University. Video games are his real passion and they take up more of his time than he'd like to admit.
Previous articleReview: Putty Squad
Next articleReview: How to Survive

Fans of Control can celebrate today with...
Read more