Broken Sword 5 Part 1 is Out Now 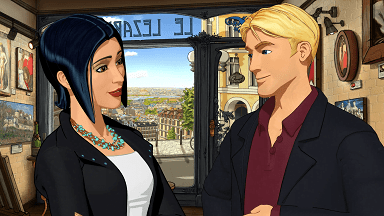 When a mysterious painting is stolen during an armed raid on a Paris gallery, George Stobbart and Nico Collard are thrown, seemingly by chance, into the investigation together. From Paris to London and beyond, the trail becomes a race against time as dark forces from Europe’s turbulent past are woken from their slumber.  Broken Sword characters old and new are encountered – but who can George and Nico trust? The journey they are on reveals a conspiracy as old as the written word, whose ancient heresies will cause innocent blood to spill once more…
“This has been a labour of love not just for us here at Revolution but the entire Broken Sword community too,” says Charles Cecil, founder, Revolution Software. “We have been privileged to be able to make the game we’ve wanted to thanks to the generous support of our Kickstarter supporters, who really have given us the freedom to take the series to new heights.

“But this is only the beginning – we’ve a concluding episode due early next year which will complete the story of what I hope will be seen as our most ambitious Broken Sword game ever. We’re really excited to finally unveil the start of George and Nico’s greatest adventure.”
Broken Sword 5 – The Serpent’s Curse: Episode One is available now for PC, Linux and Mac from Steam and GOG.com, priced £18.99. A PlayStation Vita version will be available shortly, with iOS, Android, and other formats to follow in the new year.

Chris Hare
A True Tech Geek at Heart, I Started my life of being a Tech Geek at the age of 5 with the BBC Micro. Went on through most of Nintendo stuff and now a Xbox and PlayStation fan. I also leaked the information about the leaked Hotmail passwords story from October 2009 that went World Wide. I Started writing tech articles at the beginning of 2011, most of my articles are about Android phones and Xbox One and PlayStation 4 and other gaming news. When Chris has free time its with the family.
Previous articleWelcome to Need for Speed Rivals Network
Next articleThe Free to Play Game Blacklight: Retribution Launches today for PS4

A Closer Look at the Catalyst Tempered Glass Screen Protector

If you have an iPhone 13 Pro Max you probably want to protect it, here we look at the Catalyst Tempered Glass Screen Protector.
Apple

Are you looking for a screen protector for your iPhone 12 Pro Max that also provides privacy? If so here is our review of the ZAGG InvisibleShield Glass Elite Privacy + Screen Protector.