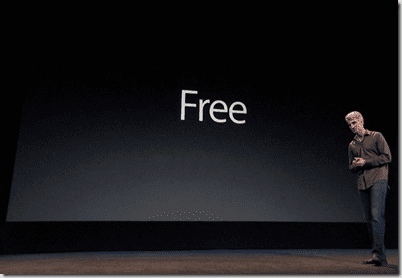 This announcement nearly had me fall out of my chair when I first read this; I just hope that Steve Jobs is not rolling over in grave as word of this monumental decision was unveiled from Apple early this morning along its other new product unveiled today like the new IPad Air. I think in the long run this is a smart business move from apple who is competing with other products on the market that use free Operating Systems on their devices (Linux anyone?). However tread lightly, while Apple may not be charging anymore for their Computer OS they will most likely be getting there Revenue back by charging an extra dollar or two by raising the price of their already expensive hardware.

To download the Maverick Operating System just head on over to the Mac App Store and download it, the file size is approximately over 5GB. Remember 2 things however is you need a Mac running at least OS X 10.6.6 or later and the right hardware to load it on.

John Keller
John has been in the IT profession for over 20 years along with being certified in both Comptia Security + (2008 edition) and a MCP (Microsoft Certified Professional) on Both Windows XP & Server 2003 Administration, He currently works as an Windows System Administrator for Northrop Grumman in the Greater Los Angeles Area and manages 3 Windows Active Directory Private Networks (Two 2008 R2 and One 2012 R2) along With 2 VMware EXSI 5.5 Servers in the US. He has been an avid fan and follower of Windows Home Server (Now the Essentials Role of Windows Server) and Visualization Since 2009. He is currently trying to exploit the full potential of Microsoft's Windows Server Operating System to the Home & Small to Medium Business Community along with the power of Visualization. When not being a Nerd and a Geek he likes to watch Movies, Read Comic Books, and most importantly spend time with his family.
Previous articleReview of the Microsoft Sculpt Comfort Desktop
Next articleInstalling VMware Tools on Linux Virtual Machines

Here is our review of the new 2021 HONOR MagicBook 14.
Digital Home

Review: ParcSlope for MacBook and iPad

Here is our two minute review of the ParcSlope for MacBook and iPad from Twelve South.
Gaming

Here is our review of the Nacon Pro Compact Xbox Controller.