See new set of screenshots and gameplay trailer showcases how players can build and destroy entire environments and worlds. Watch Mike Wazowski create a life-sized version of himself using building blocks and then have it all come crashing down. Witness Buzz Lightyear and Barbossa race on hoverboards to knock down their block towers. 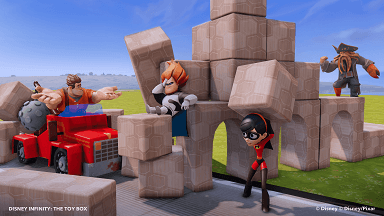 Disney Infinity is available in stores now for Xbox 360, PlayStation 3, Wii U, Wii and 3DS.

Chris Hare
A True Tech Geek at Heart, I Started my life of being a Tech Geek at the age of 5 with the BBC Micro. Went on through most of Nintendo stuff and now a Xbox and PlayStation fan. I also leaked the information about the leaked Hotmail passwords story from October 2009 that went World Wide. I Started writing tech articles at the beginning of 2011, most of my articles are about Android phones and Xbox One and PlayStation 4 and other gaming news. When Chris has free time its with the family.
Previous articleZ-Wave to Demonstrate Home Automation From the Himalayas!
Next articleStyle your Wub Wub Dubsteb Gun (Remix) Pack for Saints Row IV