The Original Assassin Returns with the Reveal of Strider

Yes the original assassin is returning with the digital release of Strider for the Xbox One, Xbox 360, PlayStation 4, PlayStation 3 and PC for Early 2014. Capcom announced the new Strider game at San Diego Comic-Con last night, An intense side scrolling action platformer, Strider’s action begins in the expansive metropolis of Kazakh City, a mix of ornate Russian architecture and hard-edged futuristic high-rise buildings with sprawling energy cables and pipework. Players freely explore the city, gaining new abilities and items which in turn open access to a truly expansive interconnected game world beyond. Strider features the same franchise hallmarks of fluid, lightning quick combat and ground-breaking free-flowing traversal that inspired many of today’s third person action titles. 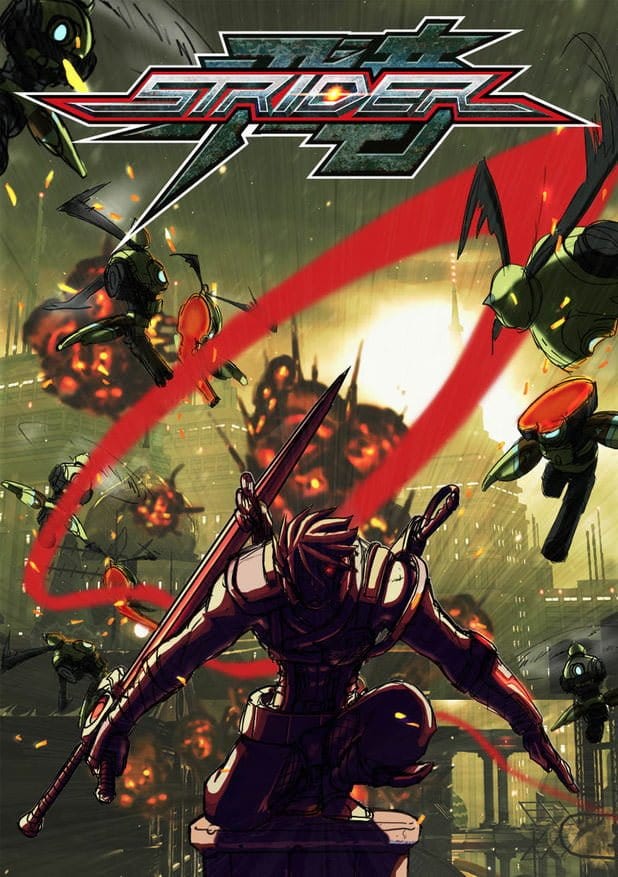 The poster that was revealed at San Diego Comic-Con.

The year is Meio: 048, on an alternate dystopian future of Earth. The whole planet suffers under the oppressive rule of the mysterious Grand Master Meio. An expert in sabotage and assassination, Hiryu is the youngest ever recruit to attain a Special A-Class in the hellish Strider training program and is the only man capable of achieving the mission to eliminate Grand Master Meio.

Perform breakneck acrobatic jumps and mid-air flips while slicing through Strider’s varied enemy types with Hiryu’s indestructible ‘Cypher’, a plasma charged weapon that can take on a number of properties. Alternatively, use the climb sickle to gain the high ground, and hit them with a surprise Kunai attack or call on support allies for some extra muscle when the going gets tough.

FEATURES
The ultimate ninja returns – Strider Hiryu, the original assassin that inspired many third person action titles returns in a completely new game for a new generation of gamers as he takes on the Grand Master Meio

Plasma Cyphers – From scorching enemies to deflecting a host of bullets, the indestructible plasma charged cypher offers a range of action tactics for players to use against their foes

Seamless Traversal – Jump, climb and run through the expansive game world with the speed and agility of a ninja whilst climbing surfaces to gain that extra height and engaging the enemy from virtually any direction

Call on your allies – Hiryu’s robot allies return, providing additional support and access to out of reach areas.

Now Watch some gameplay of Strider at work!

Chris Hare
A True Tech Geek at Heart, I Started my life of being a Tech Geek at the age of 5 with the BBC Micro. Went on through most of Nintendo stuff and now a Xbox and PlayStation fan. I also leaked the information about the leaked Hotmail passwords story from October 2009 that went World Wide. I Started writing tech articles at the beginning of 2011, most of my articles are about Android phones and Xbox One and PlayStation 4 and other gaming news. When Chris has free time its with the family.
Previous articleHavok’s Technology to Power KONAMI’s Pro Evolution Soccer 2014
Next articleTo LG to LG G2 That is the Question