Foursquare has unveiled a redesigned app for Windows Phone 8. The new look was released today after close collaboration with Microsoft and Nokia. 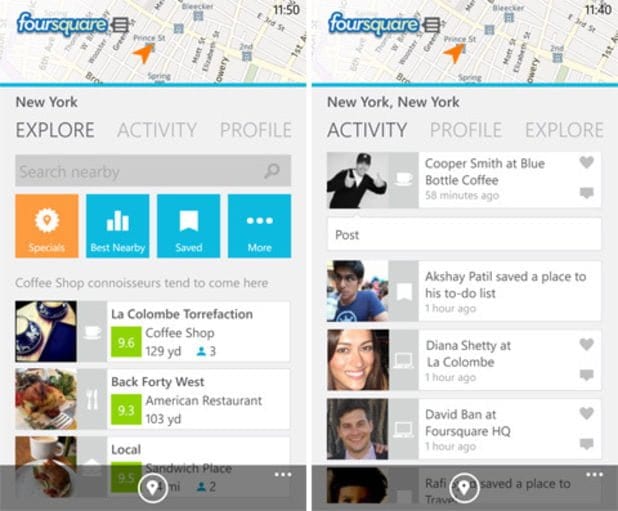 In a blog post, the location-based social network said that the updated version is “specifically  optimised” for the Nokia Lumia  and would be pre-loaded on some Lumia devices.

“Some of the Lumia models even integrate Foursquare data into their augmented reality experience,” the post added.

The redesign comes as the company aims to unclutter the Windows Phone app to suit Metro UI.

Chris Hare
A True Tech Geek at Heart, I Started my life of being a Tech Geek at the age of 5 with the BBC Micro. Went on through most of Nintendo stuff and now a Xbox and PlayStation fan. I also leaked the information about the leaked Hotmail passwords story from October 2009 that went World Wide. I Started writing tech articles at the beginning of 2011, most of my articles are about Android phones and Xbox One and PlayStation 4 and other gaming news. When Chris has free time its with the family.
Previous articleTrials Evolution: Gold Edition demo available for PC
Next articleSplinter Cell Blacklist – Spies Vs Mercs The Big Reveal

Studio Aesthesia revitalizes a niche genre, and adds a new touch to create an exciting twin-stick experience to add to your Steam Library.

When your enemies get in your way, don't just stand there, ram them until they die.

White Day: A Labyrinth Named School is a South Korean survival-horror game originally developed and published by the studio Sonnori back in 2001. It was remade for mobile phones in 2015 and for Windows and Playstation 4 in 2017.

It has been a very busy 48 hours following...
Read more