Google has revealed its first  laptop with touchscreen capability.

The high-res Chromebook Pixel is  described as having “the highest pixel density (239 pixels per inch) of any  laptop screen on the market today”. 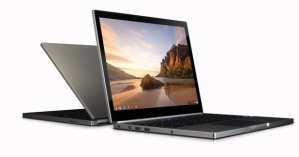 Google also wrote in its official blog that the touchscreen on the  Pixel will make it easier for users to “organise tabs, swipe through apps and  edit photos with the tip of your finger”.

As a rival to Apple’s Retina  Display, the Pixel also features Intel’s Sandy Bridge processors and fast 4G LTE  connectivity, plus a resolution of 4.3 million pixels. It will also be powered  by an Intel Core i5 Processor for speed.

Instead of local storage, Chrome  OS computers run applications through a web browser and store files in the cloud  – an element some users are finding hard to adjust to.
However, the  Chromebook Pixel will run Google’s Chrome operating system, and it is hoped that  this will be the product to turn around Google’s fortunes when it comes to  consumers’ interest in Chromebooks.

The Pixel also possesses “powerful, full-range speakers” and a 720p webcam. The  computer will also have three microphones, which will be designed to cancel out  surrounding noise.

Chromebooks have faced adversity when it comes to  providing a viable alternative to the much-used Windows-powered computers.

Chris Hare
A True Tech Geek at Heart, I Started my life of being a Tech Geek at the age of 5 with the BBC Micro. Went on through most of Nintendo stuff and now a Xbox and PlayStation fan. I also leaked the information about the leaked Hotmail passwords story from October 2009 that went World Wide. I Started writing tech articles at the beginning of 2011, most of my articles are about Android phones and Xbox One and PlayStation 4 and other gaming news. When Chris has free time its with the family.
Previous articleEXCLUSIVE Army of Two The Devil’s Cartel interview with Greg Rizzer from Visceral Games
Next articleApple iPad Mini 2 Case ‘Leaked Photo’

Here is are review of the new Garmin Dash Cam 67W.
Gaming

After a year of lockdown restrictions and, let’s be honest, not much opportunity to have a good old knees-up, Monkey Shoulder has released a spirit lifting multi-player game, Cards For Hilarity, to inject some much-needed laughter back into 2021.
Tech

Amazon, which started out as a basic online bookshop in...
News