Dyson, the British engineering group behind the bagless vacuum cleaner and the ‘airblade’ dryer, has unveiled a  new device that combines a hot and cold water tap with a hand dryer.

The  Airblade Tap cuts out the need to go to a separate hand drying area as the  system washes a person’s hands, and then dries them in 12 seconds right at the  tap. 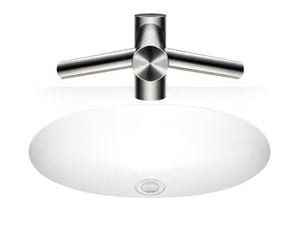 Whilst the Airblade Tap is not cheap at £1,000, the firm’s founder, Sir James  Dyson, feels that it offers savings over separate hot air dryers and towel  dispensers in public bathrooms.

The machine uses a totally redesigned  Dyson digital motor placed underneath the sink, along with an air filter and  sound-silencing equipment.

A pipe then carries the water, electrics and  the air up to the tap, where a stainless steel head unit delivers the water flow  and unheated air jets out at 430mph (692 km/h).

Both the water and air  streams are sensor operated so there are no taps or buttons to touch. The  infrared sensors emit light to pinpoint the position of a person’s hands, and  then computer circuitry co-ordinates the response of water or air “without long  delays”.

After washing, the system is claimed to dry hands in 12  seconds, compared with 43 seconds for a conventional wall-mounted dryer. 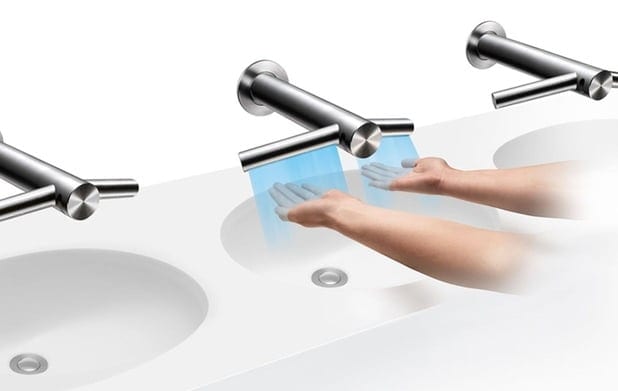 Dyson also feel that there is a hygiene and safety benefit to the system.

“The conventional way to wash and dry hands is too slow. Hand drying  facilities are often not located near a sink, and hand dryers can take up to 43  seconds, so people can give up. But damp hands spread up to 1,000 times more  bacteria than dry hands,” said Dyson on its website.

“There’s no need to  leave the sink to use the Dyson Airblade tap hand dryer and it dries hands in 12  seconds.”

Sir James Dyson added: “In washrooms using conventional taps,  you’ll need to move to a separate hand drying area, dripping water on the floors  as you go. It’s why we’ve developed a tap with our hand drying technology in  it.”

Dyson have calculated that after the upfront cost, the Airblade Tap costs £48 per year to run, compared with an estimated £1,460 for a paper towel dispenser (involving re-stocking and disposal).

The firm says that the tap costs up to 69% less to run per year than other hand dryers, and it can also  save on space in washrooms.

Dyson’s existing Airblade hand dryer range have proved a huge success since they  launched in 2006, and the devices are now installed at more than 250,000  locations around the world.

But some commentators believe that the  upfront cost of the Airblade Tap may put some people off.

Stuff magazine news editor Will Dunn said that the £1,000 price may mean only businesses  wanting premium design will take the plunge.

Chris Hare
A True Tech Geek at Heart, I Started my life of being a Tech Geek at the age of 5 with the BBC Micro. Went on through most of Nintendo stuff and now a Xbox and PlayStation fan. I also leaked the information about the leaked Hotmail passwords story from October 2009 that went World Wide. I Started writing tech articles at the beginning of 2011, most of my articles are about Android phones and Xbox One and PlayStation 4 and other gaming news. When Chris has free time its with the family.
Previous articleInjustice: Gods Among Us Battle Arena Invites Fans to Pick their Champion in Weekly Match-ups
Next articleSky take another step forward in keeping kids safe online