Phones 4u today announced availability of the new BlackBerry Z10 smartphone in both white and black colour models. The white model will be available first from Phones 4u. 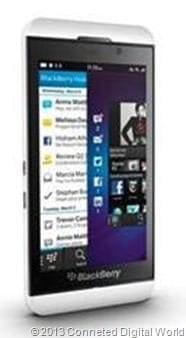 Phones 4u will be celebrating the launch of the newest BlackBerry smartphone with none other than pop princess Pixie Lott at the flagship Phones 4u Oxford Street store tomorrow from 9am, where customers and fans can be amongst the first to experience the new BlackBerry Z10, get their hands on some freebies, AND rub shoulders with Pixie Lott herself.  The first fifty customers to purchase the new BlackBerry Z10 at Phones 4u Oxford Street tomorrow will also receive a 64GB BlackBerry PlayBook tablet.

Customers will also be able to purchase the white or black model from 9am on 31st January online at Phones 4u. The first 250 customers to purchase a new BlackBerry Z10 from Phones 4u online will also receive a 64GB BlackBerry PlayBook.

BlackBerry 10 is a re-designed, re-engineered and re-invented platform that creates a powerful and unique new mobile computing experience. BlackBerry 10 gives customers a faster and smarter experience that continuously adapts to their needs. Every feature, every gesture, and every detail is designed to keep customers moving and includes advancements such as:

• Keyboard –  Understands and adapts to customers, so they can type faster and more accurately

• BlackBerry Balance technology – Protects what is important to customers

The BlackBerry Z10 is available in both black and white at Phones 4u, free from £36 a month on contract, on a choice of networks.

*Free 64GB BlackBerry PlayBook available on £36 and above tariffs only

Pixie Lott will be at the Phones 4u Oxford Street store from 9am on Thursday 31st January, which  is located at 399/405 Oxford Street, London, W1C 2BU (nearest station is Bond Street).

Andrew Edneyhttps://moviesgamesandtech.com
I am the owner and editor of this site. I have been interested in gadgets and tech since I was a little kid. I have also written a number of books on various tech subjects. I also blog for The Huffington Post and for FHM. And I am honoured to be a Microsoft MVP since January 2008 - again this year as an Xbox MVP.
Previous articleevasi0n – iOS 6.x Jailbreak coming soon
Next articleBioshock Infinite New City in the Sky Trailer

Wales Interactive, acclaimed for its FMV games and narrative-driven...
Gaming

If you’re looking for a fast-paced action game, then get ready to join the battle in Worms Rumble as you blast your way to victory.
Events

EGX2021 is a slow-burner but it's still worthy of your time.