Defiance gets a release date and new trailer 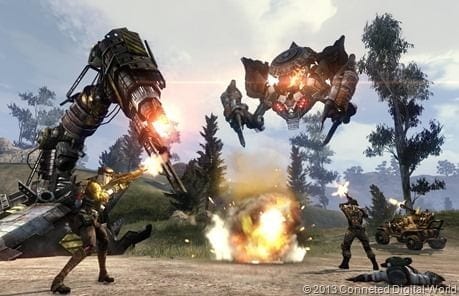 Defiance is an immersive online open-world shooter for console and PC set in a future shattered Earth. A revolutionary transmedia experience, the game will launch alongside the original Syfy TV show Defiance, with events from each impacting the other’s evolution. The game combines the intense action of a console third-person shooter, with the persistence, scale, and customization of an MMO, while its TV counterpart exudes the scope, story, and drama of a classic sci-fi epic.

For those who cannot wait until April 2nd to get a look into life as an Ark Hunter in Defiance, Trion released the full version of their highly-anticipated Defiance live action game trailer titled “Join the Fight” today. Set in the arid desert, this trailer combines the isolated, post-apocalyptic setting of Defiance with futuristic EGO technology and a Hellbug attack. This live action trailer gives further insight into the lives behind the Ark Hunters in Defiance, and how there is never a safe moment on this new, terraformed Earth.  And here it is:

Gamers can now preorder Defiance online and at major game retailers, and choose from multiple game bundles, digital and physical, starting at £34.99: Standard, Collectors, and a very limited number of Ultimate editions are on sale now. Each package allows players to delve deeper, and more quickly, into the persistent futuristic universe where the survival of Earth relies on your skills as an Ark Hunter leveling up in massive co-op battles and fierce multiplayer combat.

Andrew Edneyhttps://moviesgamesandtech.com
I am the owner and editor of this site. I have been interested in gadgets and tech since I was a little kid. I have also written a number of books on various tech subjects. I also blog for The Huffington Post and for FHM. And I am honoured to be a Microsoft MVP since January 2008 - again this year as an Xbox MVP.
Previous articleWindows Phone 7.8 now rolling out
Next articleCall of Duty: Black Ops 2 Wii U patch problems