NYNE announced what they are calling “…Smart Media Centers for the home…” at CES2013.  We bring you the details! 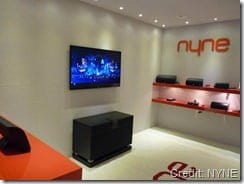 NYNE announced what they are calling “…Smart Media Centers for the home…” at CES2013.  The device is a console with speakers, designed to hide away all of the electronics that run your current home theater system.  The design is stylish and modern.  Here is the press release:

Oxnard, CA — December 20, 2012 ─ NYNE, a company that enriches consumers’ listening experiences with advanced acoustics, is set to introduce the first product in its category of Smart Media Centers for the home, the SMC-1000, at CES 2013. For the sophisticated audiophile who wants it all, the SMC-1000 is the first of its kind that combines style, function, versatility and superb audio. The SMC-1000 will be available for a private showing and demo at CES in Central Hall booth #11426 and will be available for delivery Q2 2013.

“Finally the discerning audio-video enthusiast can sweep aside those racks, stacks and wires in the living room and replace them with a high fashion, integrated media console,” said Arman Arami, president of NYNE. “NYNE’s SMC-1000 is not just another functional gear box masquerading as a TV stand. It’s a stylish media console with great sound that just happens to also be highly functional. With clean lines and a small footprint, the well-designed SMC-1000 will flatter any modern living room.”

The SMC-1000 delivers a high performance audio experience with integrated soundbar technology. It boasts a 2.1 stereo system with a robust 400-Watts RMS power from two mid-range drivers, two tweeters and one subwoofer reaching 96db SPL. Whether it’s viewing a movie, listening to music or playing a video game, the SMC-1000’s sound system will impress the most ardent audiophile.

NYNE’s SMC-1000 is a true connectivity wizard with both wireless and wired connectivity for a wide range of audio and video devices. With 4 HDMI ports, 2 USB ports, Optical and Coaxial digital inputs, built-in Apple Lightning dock, Apple Airplay, 3.5 mm Aux-In and wireless Bluetooth – the audiovisual world is at your fingertips. Plus, for Android-based devices, Near Field Communication (NFC) allows users to connect to the SMC-1000 simply by tapping their device to the unit.

In today’s tech-crazy New World order, it’s all about great sound that includes device integration and a bold, shared experience – with no visual clutter. The SMC-1000 is up to the challenge. All wires and external devices magically disappear, allowing you to focus on superb sound and images instead.

This is our way of saying NYNE supports you regardless of the device you are using. Apple, Android, smartphones, media players and portable tablets – just to name a few of the myriad possibilities. NYNE’s SMC-1000 plays nice with them all!

Leave the car in the driveway and park yourself on your comfy couch for a personalized cinematic experience – compliments of NYNE’s SMC-1000. Whether your device of choice is a Blu-Ray player, satellite receiver, game console, cable box, or computer, NYNE can accommodate you. So snuggle in with your favorite snack food and enjoy!

Admit it. You complain your kids are addicted to their game console, but secretly wish you could play too – without having to sit on the floor. So grab the console, slip it into one of SMC-1000’s hidden compartments, and quickly connect to a HDMI port. The superb sound effects roaring from the SMC-1000’s sound system will change your definition of addiction to Pure Enjoyment. Hooked!

This certainly looks better than the glass and steel table that houses my electronics in my living room!  Pricing is TBD and the product is expected to be available in Q2 2013.  We’ll keep you posted on this one!

While driving is an experience that many people enjoy and do every day, it’s also very dangerous and many people are caught in accidents every day