Just how realistic is Sleeping Dogs? We speak to Chris Thrall a former doorman for the Triads in Hong Kong

We recently reviewed the Square Enix game Sleeping Dogs, a gritty undercover cop action game where your character goes up against the Triads. We spoke with a former doorman of one of the Traids clubs in Hong Kong to ask his just how realistic the game actually is. 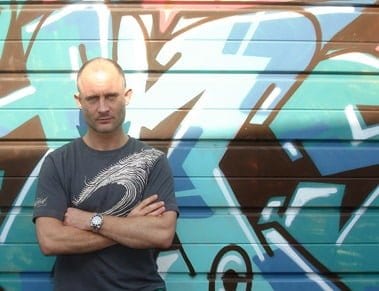 Chris Thrall lives in the UK. At eighteen, he joined the Royal Marine Commandos. Following active service in the Northern Ireland Conflict and training in Arctic warfare and survival, he earned his parachutist’s ‘wings’ and went on to serve as part of a high-security detachment on board an aircraft carrier.

In 1995, he left the military and moved to Hong Kong to oversee the Asia-Pacific expansion of a successful network-marketing operation he’d built, part-time, while serving in the Armed Forces.

From there he ended up working for the Triads as a doorman at one of their clubs in Hong Kong, so he certainly has the credentials to comment on the realism and look of the game.

So here is the interview with Chris:

CDW: Hi Chris, thanks for taking the time to speak to us.

CHRIS THRALL: You are very welcome.

CDW: Tell us about your thoughts on Sleeping Dogs and how you first found out about it?

CHRIS THRALL: I first came across the game when I saw someone tweeting about it and so I looked it up on Google and then subsequently YouTube and I was quite blown away because it was like Déjà vu for me from my own experience in Hong Kong. It’s very well put together, obviously these guys have done their research and I was quite impressed.

CDW: You said it reminds you of your time in Hong Kong, tell us a little about that.

CHRIS THRALL: In a nutshell Andrew, I left the marines in this country to go and run a business in Hong Kong which I had started part time while I was in the forces. By the time I had served my notice and moved to Asia my business was flailing and subsequently collapsed, and so I was stuck on the other side of the world, and I took a bizarre series of jobs. As I did that I got addicted to a drug called Crystal Meth and as my life spiralled out of control, I pretty much burnt all the bridges available to me work wise so I ended up taking a job as a nightclub doorman at Club Nemo in the Wan Chai red-light district working for a club that was run by the 14K, one of Hong Kong’s notorious Triad syndicates.

CDW: You have had a lot of experience with the Triads, so does the game get the culture right, or does it either overplay or underplay it?

CHRIS THRALL: Well we have to remember that it is a game, and the idea of a game is to give people an experience they wouldn’t ordinarily get in their own lives unless they want to fly out to Hong Kong like I did and got a bit mad for a year and a half. It’s so uncannily realistic in parts, as I said it’s really déjà vu for me watching it, and the terminology the Triads use and the constant swearing and the issue of respect is something that features heavily in this game and that’s something that’s very true with the Triads.

CDW: Does the game capture a realistic look for Hong Kong from your personal experiences?

CHRIS THRALL: I don’t think it just looks right Andrew, it is so identical that it’s really uncanny. They have even got it down to minute details including how the walls of the buildings look and how rust drips down from the air conditioning units – it’s pretty full on!

CDW: Can you give us some examples of some of the experiences you had out in Hong Kong?

CHRIS THRALL: I love experiences myself, and I like to throw myself into the experience while I am there, and that’s what I did in Hong Kong. I trained myself in the language, I lived with a Chinese family for 8 or 9 months. I started buying marijuana from a group of Triads that hung out in a rundown ghetto in Hong Kong known as Chungking Mansions. When I started reading up on this ancient brotherhood that had existed for the last 500 years or so that had started from a humble philanthropic beginnings fighting against an oppressive Chinese dynasty and hiding out in the marshes – hence the expression “Brothers of the Marsh” I was just fascinated and completely reeled in by it, and to trace that forward and to see how they started from these philanthropic roots and somewhere along the line that had kind of got screwed into all out crime. These guys operate in Hong Kong under the radar of the law or even perhaps controlling the law – I was completely absorbed in it. There I was, working in a nightclub, I was the only westerner that worked for the Chinese, certainly the only one that worked for a Triad gang and I got to see quite a lot of experiences that were pretty beyond belief really.

One thing you see in the game is that there are two rival Triad groups – the Sun On Yee which I am assuming is modelled on the Sun Yee On which is an actual Triad group in Hong Kong and in the first scenes of the game you see them moving in on the territory of another Triad to extort protection money from people, and that’s something that goes on. One night we had a guy, he was a member from another gang, he was an elderly guy, he had come into the club. I don’t know what he was doing but whatever it was he had made the guys in my Triad lose face and my fellow doorman basically picked this guy up, dragged him out to the entrance, right where I was standing and they smashed him down on the ground and they set about kicking him in the head, so hard and fast it was just beyond what you would believe really. As the guy kind of gathered himself up and ran out the door, a list fell out of his pocket, the other Triads I worked with hadn’t seen it so I picked it up and it was a list of racehorses so obviously he had been passing off hookey racehorses in my club and he had suffered the wrath of the 14K because of it.

There was another time when I was minding my own business sat at the bar talking to the barman and the barman just stopped in mid-sentence. He froze and his eyes were locked on the door of our club and as I looked up, all the other Triads had done likewise, they had all put their drinks down. They were stood – it was like something from a film – all stood unmoving. Through the door had come about 20 or so members of the Sun Yee On actually which are based in the mainland town, Kowloon side is their territory in Hong Kong, so for them to be encroaching on another Triad’s territory, well you just don’t do it – it’s all about the issue of face in Hong Kong. I don’t know what had been done but obviously they were out to show a bit of force, and everything in the nightclub just froze and there was a standoff for what was probably only 20-25 seconds and I waiting for someone to start pulling out a chopping blade. Triads use to carry little leather wallets about the size of a pencil case and inside is where they kept their meat cleavers. And so I am stood there thinking “what’s going to happen next?”, and another thing that Triads use is a lot of secret terminology and hand signs. It’s not what they say, but it’s what’s said with their eyes and hands. Someone must have given a secret sign because this Sun Yee On Triad, literally all at the same time spun around and headed like a snake out the door.

CDW: You have also written a book about your experiences called Eating Smoke – tell us a little bit about that. 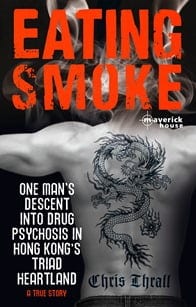 CHRIS THRALL: My book was number 2 best seller in Hong Kong for 7 months and it debuted in WH Smiths here in the UK Airports at number 6 and stayed there for quite a while.

CDW: What made you put your experiences down in a book?

CHRIS THRALL: Well really because I couldn’t quite believe, I obviously went through quite a lot myself, the drugs, I got very ill, I developed psychosis which is quite a fascinating story in itself, but also I just thought how many westerners had worked for the Hong Kong Triads? I had never heard of any. Who could put down the sorts of stories I am telling you Andrew in a book for others to experience? So one day I just started writing. I’m completely self-taught. I’ve only got GCSE English which I taught myself in the Marines. And I wrote, and I wrote, and I learnt how to edit, how to do punctuation and grammar, narrative and dialogue, and then out of that came the book Eating Smoke.

CDW: Thank you very much for time Chris.

Chris’s book is a very interesting read about his journey and experiences, and it’s one worth taking the time to read.

So as you can see, someone who has actually been in the world of the Triad’s believes that the game has the right look and feel, which says to me that the developers at United Front Games got it right!

Have you played Sleeping Dogs yet? Tell us what you think by leaving a comment below.

Andrew Edneyhttps://moviesgamesandtech.com
I am the owner and editor of this site. I have been interested in gadgets and tech since I was a little kid. I have also written a number of books on various tech subjects. I also blog for The Huffington Post and for FHM. And I am honoured to be a Microsoft MVP since January 2008 - again this year as an Xbox MVP.
Previous articleReview of Square Enix’s new action game Sleeping Dogs
Next articleLG unveils the TM2972 Personal Smart TV