Happy 30th Birthday to the Commodore 64

When I was a kid I had a ZX Spectrum – our arch rival was the Commodore 64, and yesterday it turned 30! 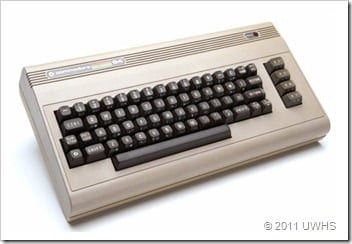 The Commodore 64 made it’s debut at CES and it took until the Autumn to actually get released.

This is what Wikipedia say about it:

The Commodore 64, commonly called C64, C=64 (after the graphic logo on the case) or occasionally CBM 64 (for Commodore Business Machines), or VIC-64, was an 8-bit home computer introduced in January 1982 by Commodore International.

Volume production started in the spring of 1982, with machines being released on to the market in August at a price of US$ 595.Preceded by the Commodore VIC-20 and Commodore PET, the C64 took its name from its 64 kilobytes (65,536 bytes) of RAM, and had favourable sound and graphical specifications when compared to contemporary systems such as the Apple II, at a price that was well below the circa US$ 1200 demanded by Apple.

During the C64’s lifetime, sales totalled between 12.5 and 17 million units, making it the best-selling single personal computer model of all time. For a substantial period of time (1983–1986), the C64 dominated the market with between 30% and 40% share and 2 million units sold per year, outselling the IBM PC compatibles, Apple Inc. computers, and Atari 8-bit family computers. Sam Tramiel, a later Atari president and the son of Commodore’s founder, said in a 1989 interview “When I was at Commodore we were building 400,000 C64s a month for a couple of years.”

Part of its success was because it was sold in retail stores instead of electronics stores. Commodore produced many of its parts in-house to control supplies and cost. It is sometimes compared to the Ford Model T automobile for its role in bringing a new technology to middle-class households via creative mass-production.

Approximately 10,000 commercial software titles were made for the Commodore 64 including development tools, office productivity applications, and games. C64 emulators allow anyone with a modern computer, or a compatible video game console, to run these programs today. The C64 is also credited with popularizing the computer demoscene and is still used today by some computer hobbyists.

Did you have a Commodore 64? Share some of your memories with us by leaving a comment below.

Andrew Edneyhttps://moviesgamesandtech.com
I am the owner and editor of this site. I have been interested in gadgets and tech since I was a little kid. I have also written a number of books on various tech subjects. I also blog for The Huffington Post and for FHM. And I am honoured to be a Microsoft MVP since January 2008 - again this year as an Xbox MVP.
Previous articleReview of the HTC One S Android smartphone
Next articleThe Digital Lifestyle Show 365 MediaPortal

While driving is an experience that many people enjoy and do every day, it’s also very dangerous and many people are caught in accidents every day
Gaming

If you ever questioned what a Yakuza/ Ace Attorney...