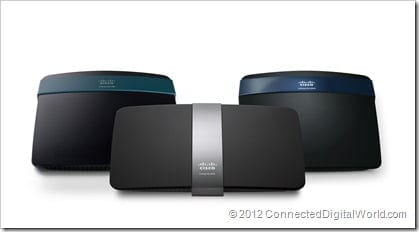 The new technology is designed to deliver wireless speeds approximately three times faster than the current wireless 802.11n standard. The new Linksys Smart Wi-Fi Router EA6500 uniquely blends the highest performance 802.11ac technology with Cisco’s intelligent Cisco Connect Cloud software platform for an experience that is both powerful and intuitive, simplifying how consumers connect, control and interact with their home devices and appliances.

Timing of this announcement comes as laptop and smart phone manufacturers are expected to start introducing 802.11ac products towards the end of 2012. Consumers can also take advantage of the new technology by connecting their smart TVs, game consoles and other devices to the new Linksys Smart Wi-Fi Router via the new Linksys Universal Media Connector.

“The power of 802.11ac technology coupled with Linksys Smart Wi-Fi Routers, our game-changing new software platform and mobile capabilities enables all new experiences in and out of the home that consumers can’t get with any other solution,” said Brett Wingo, vice president and general manager, Cisco Home Networking. “As consumers begin the transition to the new Wi-Fi technology, Linksys is introducing a solution that not only includes a powerful product, but has new innovation that enables them to stay connected to their devices and home wireless networks from anywhere, anytime. We deliver the most complete solution, from performance to usability to customer satisfaction.”

The new Linksys Smart Wi-Fi Router with AC technology is backwards compatible with prior wireless networks and devices using 802.11a/b/g/n. This assures consumers can upgrade to the new Linksys 802.11ac products and still have full interoperability with legacy Wi-Fi devices. As new 802.11ac devices such as smartphones and tablets enter the market, consumers will be able to take full advantage of the new capabilities and power with their Linksys Smart Wi-Fi Router that offers 802.11ac performance.

The Linksys Smart Wi-Fi Router EA6500 contains six internal 3D antennae that are designed to insure the same performance whether placed on a desktop or mounted against the wall. Additionally, it features an elegant new design that was inspired by the award-winning Linksys E4200 model to complement any home decor.

Ideal for video and mobile devices

The new 802.11ac technology is optimised to meet the explosive increase in video consumption and the proliferation of wireless devices in the home. Cisco expects that in 2016 there will be 19 billion connected devices globally and that 1.2 million minutes of video will be viewed online every second. The new wireless technology has been designed to improve speed, range and reliability and also helps to improve power consumption for mobile devices. This is becoming increasingly important to provide good connectivity for the growing amount of mobile devices that enter the home and will also help provide the type of quality connectivity required for a range of activities including watching live TV or on demand video in the living room, study or bedroom.

The new Linksys Universal Media Connector enables consumers to connect wired devices such as Smart TVs and game consoles to their Wi-Fi network and stream HD or even 3D HD video content wirelessly –and has been optimised to work with the Linksys Smart Wi-FI Router EA6500. The connector operates in the 5Ghz band that offers less interference for a clearer signal. Additionally, with four gigabit ports users can connect a variety of entertainment devices in the living room to the Internet at incredibly fast speeds.

As with all Linksys Smart Wi-Fi Routers, the EA6500 comes with Cisco Connect Cloud, the cloud platform that has been designed to provide convenient anytime, anywhere access to the home network and its connected devices – from a web browser or mobile device. Consumers can now enjoy new mobile apps and experiences, on their Android and iOS mobile devices, from Cisco and third party developers that are part of the Linksys Developer Community. To help simplify connectivity further, Cisco has integrated SimpleTapä into the new Cisco Connect Cloud mobile app. With SimpleTapä, consumers can connect devices with as little as one tap of a button and in the future even by swiping their NFC-enabled smart phone over an NFC tag to connect to the network powered by a Linksys Smart Wi-Fi Router EA6500. Cisco is currently working with consumer electronics (CE) and home appliance brands to include SimpleTap technology into a variety of products.

The Linksys Smart Wi-Fi Router EA6500 is targeted for availability in September at major retailers, as well as the Linksys online store. The Linksys Universal Media Connector is expected in October at the same outlets.

Look out for our review later this year. Having seen a demo of the speeds that can be achieved with 802.11ac back at CES in January I am really looking forward to seeing what this router can do. 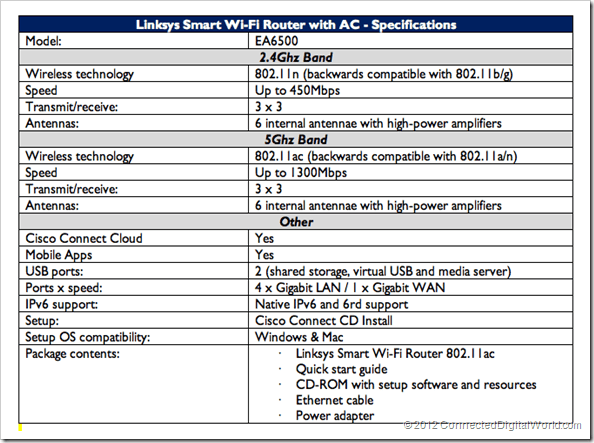 Andrew Edneyhttps://moviesgamesandtech.com
I am the owner and editor of this site. I have been interested in gadgets and tech since I was a little kid. I have also written a number of books on various tech subjects. I also blog for The Huffington Post and for FHM. And I am honoured to be a Microsoft MVP since January 2008 - again this year as an Xbox MVP.
Previous articleGoogle Demos Project Glass With Skydivers!
Next articleGoogle introduces Android 4.1 codename Jelly Bean