Those few very lucky people who got their Raspberry Pi’s can now download updated Debian, Arch Linux ARM images to play with. 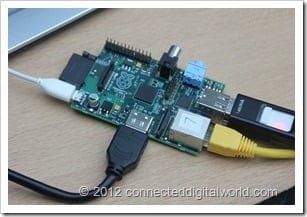 This is what was posted:

Liam has just uploaded new versions of the Debian and Arch Linux ARM distributions to our mirror system. Head on over to the downloads page. The Debian image contains the following updates to the prior 13-04-2012 release:

The alpha-quality ALSA driver included in this release is disabled by default. Type

Check out our Raspberry Pi coverage from the [email protected] event

Have you ordered one? Let us know if you get yours before us, or even after us.

Andrew Edneyhttps://moviesgamesandtech.com
I am the owner and editor of this site. I have been interested in gadgets and tech since I was a little kid. I have also written a number of books on various tech subjects. I also blog for The Huffington Post and for FHM. And I am honoured to be a Microsoft MVP since January 2008 - again this year as an Xbox MVP.
Previous articleReview of the Samsung 27″ C27A750X Series 7 LED Hub Monitor
Next articleReview of the Synology DS212j NAS Server