Yesterday we told you that some users of Windows Home Server 2011 have been reporting Computing Monitoring Errors and that Microsoft have just released a hotfix to cure the problem. They also released versions of the hotfix of those Small Business Server 2011 Essentials and Storage Server 2008 R2 Essentials users with the same issue. 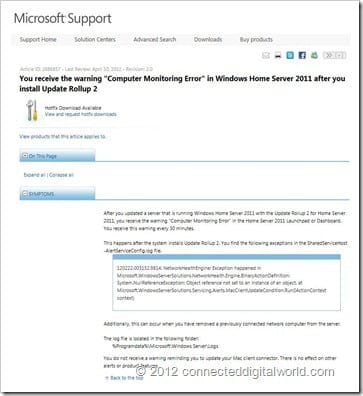 Additionally, this can occur when you have removed a previously connected network computer from the server.
The log file is located in the following folder:

You do not receive a warning reminding you to update your Mac client connector. There is no effect on other alerts or product features.

This occurs when one of the Alert evaluation components in Home Server 2011 tries to iterate through the records of all client computers in the network. It throws an unhandled exception when the component accesses the record of a client computer that was removed.

A supported hotfix is available from Microsoft. However, this hotfix is intended to correct only the problem that is described in this article. Apply this hotfix only to systems that are experiencing this specific problem.

You must submit a request to Microsoft Customer Service and Support to obtain the hotfix.

Thanks to IT Beast for finding the links!

Andrew Edneyhttps://moviesgamesandtech.com
I am the owner and editor of this site. I have been interested in gadgets and tech since I was a little kid. I have also written a number of books on various tech subjects. I also blog for The Huffington Post and for FHM. And I am honoured to be a Microsoft MVP since January 2008 - again this year as an Xbox MVP.
Previous articleNetflix updates its Windows Phone app; brings support to Latin America, UK and Ireland
Next articlePlex for Google TV gets updated to version 2.1.0.7

It has been a very busy 48 hours following...
Read more