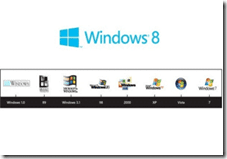 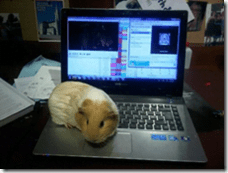 Introduction – Why do I want try something that will more than likely make my computer unusable? 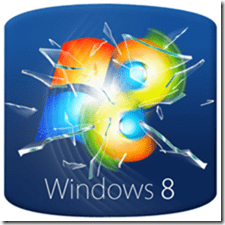 Since the days of Windows 95 when Microsoft has released Beta Operating System’s to be tried out by the General Public (Translated, Try at your own Risk) we the user population would have to hope and pray that if we installed the most likely Non Stable Volatile OS that Microsoft currently had to offer to try on our own Personal Computer that It would not blow up in our faces (Not literally but it sure felt that way). So why would we allow ourselves to do this? To try something on our perfectly good machines when we know there was over a fifty percent chance that it may cost us the user lots of time and work? This is because we wanted to see the new Features that Microsoft had to bring into their new OS that they were releasing and would it work for what we needed it to work for. So here we are almost 20 years later, The Windows 8 Consumer Preview has been released and once again we contemplate the same question; “Do I really want to screw up my perfectly working PC to try out Microsoft’s new OS ?” However, there is now a solution that was never readably there before and that solution is Virtualization. In this article I will be going over how to successfully obtain the necessary prerequisites and resources to configure your choice of Virtual Appliance to run Windows 8 consumer Preview on your Home PC or Laptop. 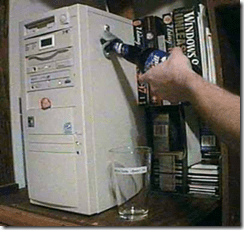 I have a friend who strongly believes in that before starting any computer related task that you should have a frosty cold one at your side in the ready position, this of course is optional and can be substituted for something with just a little bit more carbonation in it instead.

Now first and foremost is we need to make sure that the PC (Desktop or Laptop) will be able to host the virtualized OS (In this case Windows 8 Consumer Preview), so the following host PC should have the following as a Bare Minimum in Hardware specs. Most PC’s that were made in the last 4 to 5 years should be able to meet those specifications…

· Running at least Microsoft Windows XP SP2 (32 Bit or 64 bit) Operating Systems or Higher Versions (For Both VMware Player and Virtual Box). For Mac users most versions of OS X (Virtual Box Only)

Second, we need to download the Windows 8 Consumer Preview from Microsoft. You will be given a choice of either 32 bit or 64 bit versions of Windows 8, I recommend choosing the 32 bit version for your virtual evaluation so you can save on the host system resources. The only real difference between the 32 and 64 bit versions is how much RAM you will be able to use and for evaluating the Operating System 4GB is more than enough. When you get ready to download the ISO Image File try to download it on a T1 or Cable ISP for faster download times, while you can still use Broadband or DSL due to the size of the ISO Image it could take at least 1 to 2 hours to download.

Lastly, you will need to download your choice of Virtualization Appliance and install on your Host PC. This topic will be covered in the next section of this article.

John Keller
John has been in the IT profession for over 20 years along with being certified in both Comptia Security + (2008 edition) and a MCP (Microsoft Certified Professional) on Both Windows XP & Server 2003 Administration, He currently works as an Windows System Administrator for Northrop Grumman in the Greater Los Angeles Area and manages 3 Windows Active Directory Private Networks (Two 2008 R2 and One 2012 R2) along With 2 VMware EXSI 5.5 Servers in the US. He has been an avid fan and follower of Windows Home Server (Now the Essentials Role of Windows Server) and Visualization Since 2009. He is currently trying to exploit the full potential of Microsoft's Windows Server Operating System to the Home & Small to Medium Business Community along with the power of Visualization. When not being a Nerd and a Geek he likes to watch Movies, Read Comic Books, and most importantly spend time with his family.
Previous articleRaspberry Pi Compliance Update – Good News!
Next articleGoogle+ App for iOS Gets Updated to Version 1.0.15.5173

The first physical retail store for Microsoft in the...
Read more
Android

Cloud Gaming has come a long way in a...
Read more