The guys over at XBMC.org have just released the final version of XBMC 11.0 Eden. 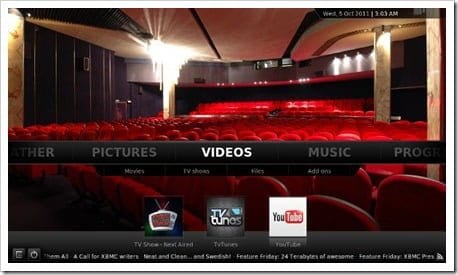 This is what was posted:

It’s been over a year in the works and today we are excited to announce that XBMC 11.0 is finally ready and available for download. You can find XBMC 11.0 here.

In addition to our many software improvements, we’ve increased our reach in the realm of hardware support since Dharma was released. Eden marks the first in-sync stable release for the Apple TV2, iPad, and other iOS devices. We’ve vastly improved the method by which we handle input, including heavily upgrading JSON-RPC support, making remote control support much, MUCH simpler in Windows, and enabling unique methods of device communication with hardware. And now even AMD devices are supported for GPU video decoding in Linux to some extent, thanks to the inclusion of VAAPI.

Beyond XBMC 11 for Windows, Linux, OSX, and iOS, we are also happy to announce XBMCbuntu Final.

XBMCbuntu is very similar to past versions of XBMC Live. By default, the user boots directly into XBMC, and if he/she chooses, he or she will never see the underlying OS. However, unlike Live, XBMCbuntu is now built upon a full LXDE desktop environment, which has a web browser (Chromium) with a fully updated (and updatable) version of Flash built-in and a GUI package manager ready to install and update all of the normal Ubuntu programs a typical Linux user might use. The user may now toggle between XBMC, which auto-starts, and a normal desktop if he or she chooses. And, perhaps most exciting for many users, XBMC will now be upgradeable, both from command line and from the GUI package manager, without fear of crashing the XBMC experience.

Naturally, those users who do not want to see the desktop will never need to. When you boot your computer, you will be booted directly into the XBMC homescreen, just as you are right now. The only clear difference is the new power underneath the hood. Those users who have already installed the Beta version of XBMCbuntu can upgrade to final using the apt-get upgrade commands.

This is great news and I will be downloading it later myself!

Have you tried it yet? If so, tell us what you think.

Andrew Edneyhttp://moviesgamesandtech.com
I am the owner and editor of this site. I have been interested in gadgets and tech since I was a little kid. I have also written a number of books on various tech subjects. I also blog for The Huffington Post and for FHM. And I am honoured to be a Microsoft MVP since January 2008 - again this year as an Xbox MVP.
Previous articleKnown Issues of Windows 8 Client Computers Connecting to Windows Home Server
Next articleStableBit DrivePool Moves to Beta M4 Build 5933