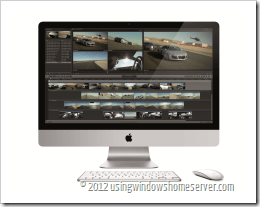 This update which introduces multicam editing that automatically syncs up to 64 angles of video and photos; advanced chroma keying for handling complex adjustments right in the app; and enhanced XML for a richer interchange with third party apps and plug-ins that support the fast growing Final Cut Pro X ecosystem. Available today as a free update from the Mac® App Store™, Final Cut Pro X v10.0.3 also includes a beta of broadcast monitoring that supports Thunderbolt devices as well as PCIe cards.

Final Cut Pro X v10.0.3 includes a collection of groundbreaking new tools for editing multicam projects. Final Cut Pro X automatically syncs clips from your shoot using audio waveforms, time and date, or timecode to create a Multicam Clip with up to 64 angles of video, which can include mixed formats, frame sizes and frame rates. The powerful Angle Editor allows you to dive into your Multicam Clip to make precise adjustments, and the Angle Viewer lets you play back multiple angles at the same time and seamlessly cut between them.

Final Cut Pro X builds upon its robust, one-step chroma key with the addition of advanced controls including color sampling, edge adjustment and light wrap. You can tackle complex keying challenges right in Final Cut Pro X, without having to export to a motion graphics application, and view your results instantly with realtime playback.

In the seven months since launch, the third party ecosystem around Final Cut Pro X has expanded dramatically. XML-compatible software like DaVinci Resolve and CatDV provide tight integration for tasks such as color correction and media management. The new 7toX app from Intelligent Assistance uses XML to import Final Cut Pro 7 projects into Final Cut Pro X. In addition, some of the industry’s largest visual effects developers, including GenArts and Red Giant, have developed motion graphics plug-ins that take advantage of the speed and real-time preview capabilities of Final Cut Pro X.

Broadcast monitoring in Final Cut Pro X is currently in beta and allows you to connect to waveform displays, vectorscopes, and calibrated, high-quality monitors to ensure that your project meets broadcast specifications. Final Cut Pro X supports monitoring of video and audio through Thunderbolt I/O devices, as well as through third party PCIe cards.

Andrew Edneyhttps://moviesgamesandtech.com
I am the owner and editor of this site. I have been interested in gadgets and tech since I was a little kid. I have also written a number of books on various tech subjects. I also blog for The Huffington Post and for FHM. And I am honoured to be a Microsoft MVP since January 2008 - again this year as an Xbox MVP.
Previous articleCyberLink Launch PowerDVD 12
Next articleShuttle Computer Announced XPC Barebone Model SZ68R5