Microsoft have released another update for it’s Microsoft Office for Mac 2011 product suite. 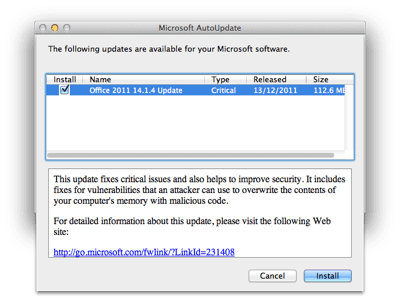 Improvements that are included in the update

The Office for Mac 2011 14.1.4 Update includes the following improvements.

Improvements for all Microsoft Office for Mac 2011 applications

Improvements for Microsoft Excel for Mac 2011

Improvements for Microsoft Outlook for Mac 2011

he Office for Mac 2011 14.1.4 Update includes the following improvements.
Improvements for all Microsoft Office for Mac 2011 applications
Update installation reliability is improved.; ;
This update fixes issues that cause the installation of previous Office for Mac 2011 updates to fail in the following situations:
When the user’s home directory contains a space.
When you deploy updates through Secure Shell (SSH).
When you install multiple updates at the same time.
Reliability is improved when you open IRM-protected documents.
This update fixes an issue that prevents Office applications from opening some Information Rights Management (IRM)-protected documents. ; ; ;
Improvements for Microsoft Excel for Mac 2011
Stability is improved.
This update fixes an issue that causes Excel to exit unexpectedly or stop responding when you open some workbooks or when you use data validation. ;
Improvements for Microsoft Outlook for Mac 2011
Password expiration notice issue is fixed.
This update fixes an issue that causes Outlook to display an incorrect password expiration notice.
Sync efficiency is improved
This update improves sync efficiency with accounts on Microsoft Exchange servers when the permission settings are changed for a shared or delegated folder.
Share
Facebook
Twitter
Pinterest
WhatsApp

Andrew Edneyhttps://moviesgamesandtech.com
I am the owner and editor of this site. I have been interested in gadgets and tech since I was a little kid. I have also written a number of books on various tech subjects. I also blog for The Huffington Post and for FHM. And I am honoured to be a Microsoft MVP since January 2008 - again this year as an Xbox MVP.
Previous articleBYOB Podcast Episode 71 Out Now
Next articleParallels Desktop for Mac Build 7.0.15052 Available