We first told you about the Xbox Companion App for Windows Phone back in October, and tomorrow it should be released. 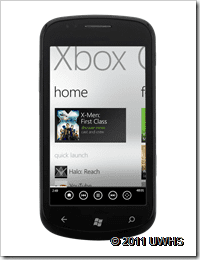 This is how Ben described it back then:

The app, which will be completely free for Windows Phone users, is an amazing little tool that will let you Find, Learn more about and Control content from Xbox LIVE Marketplace on your Xbox 360.

I was lucky enough to get my hands on a beta copy of the app to try out with my Xbox and I have to say that it’s really impressive. Here’s an actual scenario I ran through with the app and my Xbox the other day:

I for one will be interested in seeing it working tomorrow.

Andrew Edneyhttps://moviesgamesandtech.com
I am the owner and editor of this site. I have been interested in gadgets and tech since I was a little kid. I have also written a number of books on various tech subjects. I also blog for The Huffington Post and for FHM. And I am honoured to be a Microsoft MVP since January 2008 - again this year as an Xbox MVP.
Previous articleNew Xbox 360 Xbox Live Partner Schedule Announced
Next articleGoogle+ App Gets Updated to Version 1.0.7.2940

If technology such as gadgets and gaming comprise a large part of your family life, then this is the guide for you. Compiling some of the best and most fun ideas for tech-loving families, it will make sure that never a day goes past without enjoying all that technology has to offer or without bringing a smile to your family’s faces.
Reviews

Tennis Manager 2021 is for all lovers of tennis,...
Reviews

Who knew birds are this cool.